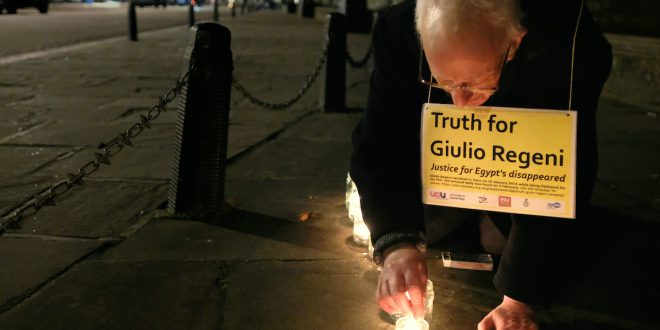 The Public Prosecutor in Rome on Wednesday officially requested legal action against four Egyptian National Security Agency officers accused of the murder of Italian student Giulio Regeni in Cairo in 2016.

Unidentified assailants kidnapped Italian student Giulio Regeni, who was 28-years-old at the time, in January 2016. A few days later, Regeni’s body was found mutilated and bearing signs of torture, in a suburb of Cairo.

Regeni came to Egypt to research trade unions, which the local authorities regard as a politically sensitive subject.

The Italian investigators accused the Egyptian intelligence services of: “Torturing Regeni for days by burning parts of his body, and kicking and punching him, in addition to using a cold weapon and truncheons before killing him.” However, Cairo rejects these accusations.

The Italian authorities identified five suspects in 2018, who were working for the Egyptian General Intelligence Service.

The Italian Public Prosecution dismissed charges against one of the suspects, concluding that the victim died due to respiratory failure caused by blows inflicted on him.

If the pre-trial chamber judge agrees to initiate the trial, it will take place in absentia due to the Egyptian authorities’ refusal to extradite the suspects.

On 31 December, the Italian government asserted that the Egyptian Public Prosecution’s decision to drop the charges against the suspected National Security agents is “unacceptable”.

The case has caused tension between Cairo and Rome, as Italy accuses the Egyptian authorities of refusing to cooperate, and even misleading Italian investigators.

However, Egypt bought two frigates from Italy worth €1.2 billion last June, in a sign of the recovery of bilateral relations between the two countries.