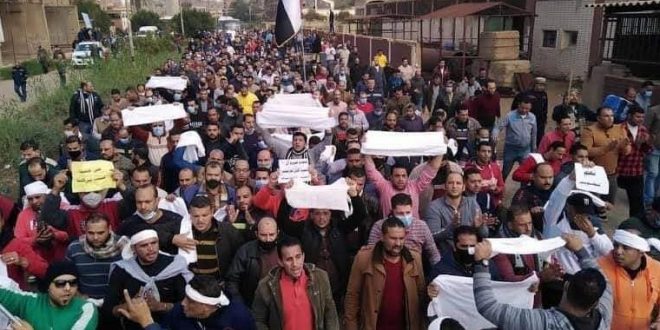 Protesting workers at a branch of the state-owned Delta Company for Fertilizers and Chemical Industries have found themselves subject to a staunch crackdown, including the arrest of at least 13 workers since last week.

Workers at the company’s Daqahlia branch are nevertheless entering the second month of a continuous sit-in in opposition to the closure and relocation of their workplace to Suez.

On Sunday, eight of the 13 workers who were arrested last week were brought before the State Security Prosecution in Cairo, where they were issued with 15-day remand detention orders, according to a current member of the company’s trade union committee who spoke to Mada Masr on condition of anonymity. The charges the workers face remain unknown.

Though the sit-in is ongoing, attempts to mediate the crisis have not made headway, sources close to the workers tell Mada Masr, as the head of the Delta Company’s parent Chemical Industries Holding Company has rejected workers’ demands.

Workers began the sit-in, which was ongoing at the time of publication, in early December outside the company’s Talkha branch in the Daqahlia governorate after being informed of a letter sent from the Armed Forces Engineering Authority in April stating that the military body would survey the public company’s premises in the lead up to its liquidation, according to what Abdul Samea Ghaith, a former member of the trade union committee, told Mada Masr.

To facilitate what workers see as the de facto liquidation of Delta Fertilizers, the holding company and the Public Enterprise Ministry have pushed a plan to merge Delta Fertilizers operations with the El Nasr Company for Fertilizers and Chemical Industries in Suez, on the pretext that there is a need to limit pollutant emissions from factories in Talkha which are surrounded by residential blocks.

Despite opposition from the company’s 2,500 workers, representatives of the holding company secured approval for the relocation and merger in an extraordinary general assembly held on December 31. The general assembly also authorized its chairperson to form a technical committee to identify which of the operating units could be moved and to look into what new facilities the company might need at the potential site in Suez.

Workers have vowed to continue their opposition to the plan, pledging to contest the general assembly decision in court if necessary. The workers contended that the December 31 decision ran contrary to a previous assembly motion to develop the company’s land assets and risked wasting nearly LE10 million, given that some equipment could not be transferred from Talkha to Suez.

Another former member of the company’s trade union committee who spoke to Mada Masr on condition of anonymity also contested the legitimacy of the claim that the move would address emissions, stating that Delta Fertilizers obtained a certificate of environmental compliance from the Environment Ministry in 2018, which allows it to continue operating until 2022. The company obtained the certificate after it undertook development measures worth LE150 million.

In the face of continued worker dissent, security forces arrested at least 13 members of the worker contingent from their homes over the weekend.

Five of those arrested — Mahmoud Sabry, a member elected by workers as their representative on the company’s board of directors, Hatem al-Mashad, Rizk al-Bishlawy, Ayman Shousha and Sabry Gadu — were released on Sunday.

However, eight others – Ramadan Guma, Khaled Atta, Ali Ismail, Mohamed Fathy, Mohamed Abdul Naby, Hassan Samir, all of whom are members of the trade union committee, in addition to Rifaat Fatah and Mahmoud Abdel Mohsen – were ordered detained on remand for 15 days by the State Security Prosecution.

While the arrests have signaled an implicit refusal of the demands of the sit-in, the Public Enterprise Ministry and holding company have also refused the mediation efforts of a prominent official in the National Security Agency, according to Ghaith.

After meeting with workers, the NSA official agreed to communicate a list of demands to Emad Eddin Mostafa, the head of the Chemical Industries Holding Company. The demands, a copy of which Mada Masr has reviewed, include the release of all imprisoned workers and a halt to the arrest campaign, in addition to the development or modernization of the company on its lands or the partial development of the company through self-financing or the transfer of the company with its factories completely and all of its employees to a plot of land owned by the holding company in the industrial zone in Damietta or Gamasa. In exchange, the workers promised to end the sit-in.

In a brief exchange with Mada Masr, Mostafa denied having received the workers demands through the mediation of any security agency.

However, according to Ghaith, Mostafa has rejected the demands. Now, workers are preparing an alternative list of demands to send directly to Mostafa, which will include either LE500,000 in compensation for each worker in addition to being appointed to a public sector job; or LE1 million in compensation in addition to an exceptional pension until the worker finds a new job; or compensation of LE2 million.

A statement issued by the Public Enterprise Ministry over the weekend noted that a development plan for the Talkha branch of Delta Fertilizers had been partially implemented until a fire at the ammonia furnace in April 2020, led to the complete halt of work at the plant.

The statement said that the April fire last year “prompted the company’s management and holding company to accelerate the development process by offering a tender to four international companies to upgrade the ammonia unit and all plant units to conform to environmental and civil protection requirements.”

According to the Public Enterprise Ministry, these plans coincided with the implementation of a government plan to relocate displaced residents of informal housing, so it was envisaged that the factory would be developed instead on the land of El Nasr Company for Fertilizers and Chemical Industries in Suez, while the factory’s 215 fedans of land would be used for social housing projects.

The Public Enterprise Ministry also recounted the history of both the El Nasr and the Delta companies in its statement, recalling that after the El Nasr Company for Fertilizers and Chemical Industries was established in Suez in 1946, its operations ceased during the 1967 war with Israel until its ammonia nitrate production factory was moved from Suez to Talkha in 1969. It included production departments for ammonia nitrate, ammonia and nitric acid, the statement recalls.

A new factory to produce 1,725 tons of urea per day, including 1,200 tons of ammonia per day became operational in 1980, and the Delta Fertilizers Company was ultimately established in Talkha on July 1, 1998, splitting from Nasr Fertilizer Company in Suez.”