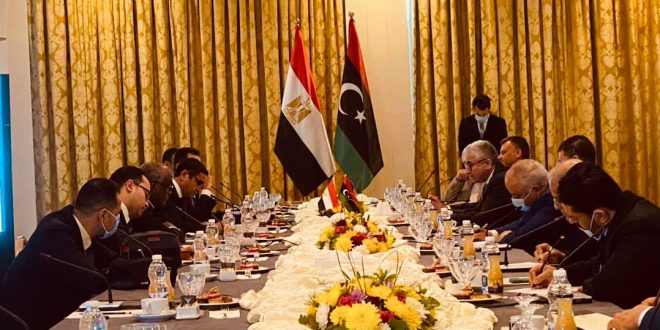 On Sunday, a senior Egyptian delegation headed by General Intelligence Service Undersecretary Major General Ayman Badie, who also heads Egypt’s Libya committee, met with several key figures in the Government of National Accord in the Libyan capital of Tripoli.

According to an informed Egyptian official, the visit had several aims but was headlined by Egypt’s desire to “preempt further Emirati incitement of a military adventure.”

The visit, which was the first since 2014 when Egypt also ended its diplomatic mission in Libya, came amid mounting military tensions around the Sirte-Jufra red line that has served as a de facto armistice line since fighting between the GNA — backed by Turkey — and the Libyan National Army — backed by Russia, the United Arab Emirates, Jordan and Egypt — ended in June.

Last Thursday, LNA Field Marshal Khalifa Haftar, who has been largely marginalized since his 14-month campaign to take Tripoli failed earlier this year, called on his forces to “drive out” Turkish troops backing the GNA. GNA Defense Minister Salah Eddin al-Nimroush was quick to respond, pledging to confront any LNA aggression and refusing to abandon Sirte and Jufra.

Despite an October agreement on a ceasefire, both sides have reinforced military deployments in recent weeks. According to the International Crisis Group, notes that “Turkey sent several sea and air shipments of military equipment to its Tripoli-based allies” throughout November and December.

ICG cites sources to add that Haftar-held positions in central and southern Libya have also received military reinforcements, pointing to new recruits coming from the south including non-Libyans, as well as Russian private military contractors who have reportedly increased their presence in Gardabiya and Jufra. ICG also cites diplomatic sources as pointing to continued supplies from the UAE to Haftar’s rear base in eastern Libya.

The Egyptian official who spoke to Mada Masr on condition of anonymity says that the Egyptian delegation came about due to Cairo’s dissatisfaction with the Emirates’ move to “impose civil war” on Libya.”

A high-ranking Libyan political source informed of the meetings in Tripoli told Mada Masr that the Egyptians communicated that they would not accept a return to war.

Egypt, the Egyptian official says, wants to focus on establishing political ties with western political actors in the coming period, and plans to open a consulate in Benghazi by mid-January followed by restoring its diplomatic mission in Tripoli.

The GNA Foreign Ministry’s spokesperson echoed this sentiment, writing on Twitter on Sunday night that the Egyptian delegation promised to resume work at its embassy in Tripoli, as soon as possible and to resume flights between Tripoli and Cairo.

Working with figures in the west of Libya will shore up Egypt’s ability to make itself a primary player in the settlement of the Libyan conflict, the Egyptian official says, which is a priority for Cairo in light of its limited intersection of interests with the incoming administration of United States President-elect Joe Biden and the faltering Libyan Political Dialogue Forum talks.

The Egyptian delegation, the Libyan political source says, held meetings with three countries while in Tripoli, while refusing to confirm whether Turkish officials were present. Egyptian officials who spoke to Mada Masr earlier this year said that Egypt would avoid direct confrontation with Turkey in Libya, as long as Turkey keeps affiliated militias far away from Egypt’s borders. Otherwise, the sources said, Egypt will have to “act.”

Despite Egypt’s pragmatism, Jalel Harchaoui, a researcher focused on North Africa at the Global Initiative, tells Mada Masr that Egypt may not be unable to avoid the conflict given the UAE’s adamance on continuing to push a military assault.

“One must not forget that the UAE has full access to western Egypt and runs several military bases there for Libya purposes,” says Harchaoui. “Said differently, Egypt — while it pursues its conversation with Tripoli and Ankara — cannot truly oppose the UAE. In fact, Egypt may still be sucked into the next phase of the war.”