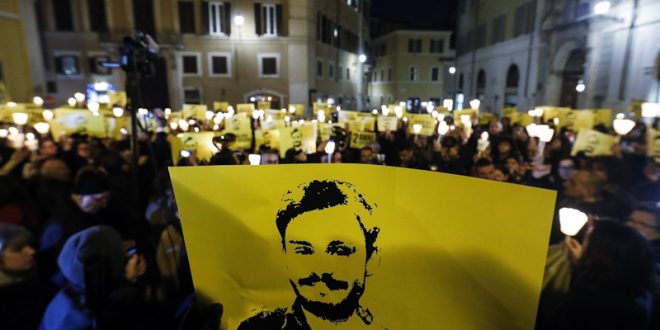 On December 10, Human Rights Day, Egypt’s Foreign Ministry called for international cooperation and an exchange of expertise without “dictation or claim of perfection that hasn’t and will never be attained by any party.”

The same day, Rome’s chief prosecutor announced she was charging four ranking Egyptian National Security Agency officers with responsibility for the abduction, torture, and murder of an Italian graduate student, Giulio Regeni, in Cairo in early 2016.

Egypt’s understanding of “cooperation” has been on full display pretty much ever since Regeni’s badly mutilated body was discovered almost five years ago, nine days after he had been “disappeared” in downtown Cairo. On November 30, following a final meeting with visiting Italian prosecutors, Egypt announced it was officially closing its investigation into Regeni’s death. “The perpetrator of the student’s murder remains unknown,” the Egyptian public prosecution statement said.

Michele Prestipino Giarritta, chief Rome prosecutor, on December 10 named Gen. Tariq Saber, Col. Aser Ibrahim, Capt. Hesham Helmi, and Maj. Magdi Abd al-Sharif as suspects in Regeni’s murder. The four have 20 days to respond, after which an Italian judge will decide whether to proceed with a trial.

It seems likely that the suspects will not respond, or make themselves available for trial. But the Italian decision to charge the four officers, despite Egypt’s refusal to cooperate, has already allowed for more information about the killing of Regeni to become public.

The prosecutor said that witnesses whose identities can’t be disclosed for security reasons reported that Regeni was taken to the Dokki police station and then to NSA headquarters in Lazoughly, where he was later seen chained, half-naked, and delirious, showing signs of torture.

Separate autopsies in Egypt and in Italy reportedly showed signs of extensive abuse on Regeni’s body.

Mohamed Lotfy, a human rights lawyer who worked on Regeni’s case and heads the Egyptian Commission for Rights and Freedoms (ECRF), said Egypt’s refusal to investigate “even a high-profile case like this one, with so much interest and with a [foreign] government behind it” was fully in keeping with the prevailing impunity for serious human rights crimes in Egypt. “So I imagine what it’s like for Egyptians,” he said.

The ECRF reported in September that since 2015 Egyptian security forces had “disappeared” 2,723 people.

The developments around Regeni’s murder also expose the readiness of Italy’s European allies, notably France and Germany, to prioritize lucrative arms deals over justice. Italy itself has shown greater interest in buttressing Egypt’s war-making potential than holding Regeni’s killers accountable. In June, the government approved a 1.2 billion Euros arms deal, reportedly just the first of a larger series of sales worth between 9 and 10 billion euros – the largest arms transfer ever for both Italy and Egypt.

Contrast the coziness of French and Italian leaders with Sisi’s administration to the European response when Iran on December 12 executed a journalist, Rouhallah Zam, on vague national security charges. France called the execution “barbaric and unacceptable,” withdrew its ambassador from Tehran and, along with Italy, Austria and Germany, cancelled participation in a December 14 online business forum. At the foot of the French Foreign Ministry tweet cancelling its participation at the forum was the hashtag “#NoBusinessAsUsual.”

How easy to criticize the terrible human rights record of a pariah state like Iran. How hypocritical to endorse “business as usual” with Egypt’s thuggish government.

The EU Parliament, on December 18, passed an unprecedentedly strong resolution urging the EU and member states “to take the lead at the upcoming session of the UN Human Rights Council to set up a long overdue monitoring and reporting mechanism” on Egypt’s “grave human rights violations.”

The resolution, echoing calls by human rights organisations, called for “a serious revision of the [European] Commission’s budget support operations” regarding Egypt and “a profound and comprehensive review of the EU’s relations with Egypt.”

It further urged member states to suspend exports of “arms, surveillance technology and other security equipment” that can be used against civil society activists, and to sanction Egyptian officials responsible for the repression.

The problem is that the EU member states ignored a similarly strong parliamentary resolution adopted last year, as they did their own EU Foreign Affairs Council “Conclusion” from August 2013 announcing the suspension of sales to Egypt that might facilitate internal repression.

Against this background of support by key EU member states for the Egyptian government, and their willingness to feed its agencies of repression, the Rome chief prosecutor’s decision to put on trial the alleged killers of Giulio Regeni may be an opportunity to document in court whether Egyptian security forces were responsible for his death and abuse, and shame Italy, France and Germany – and the United States – for continuing to indulge Egypt’s iron-fist rule.