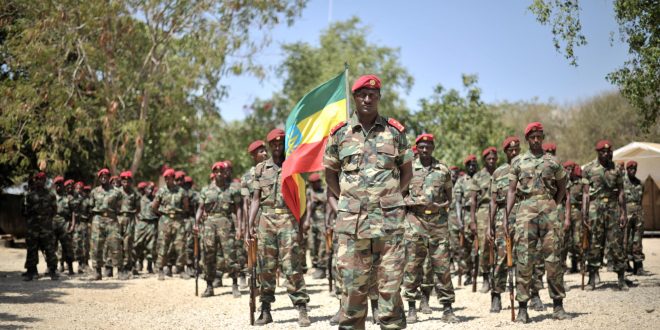 Members of the Ethiopian National Defense Forces stand in formation during a ceremony in Baidoa, Somalia, to mark the inclusion of Ethiopia into the African Union peace keeping mission in the country on January 22. AU UN IST PHOTO / Tobin Jones

While the conflict rages in the Ethiopian Tigray region, a high-ranking delegation from Eritrea arrived in Cairo Nov. 17 for a visit that raised questions about the Egyptian position on the ongoing conflict in Ethiopia and the motives behind the Eritrean ally’s visit at this time.

Ahmed Hafez, a spokesman for the Egyptian Ministry of Foreign Affairs, said in a press statement Nov. 18 that the meeting tackled the current situation in the Horn of Africa and ways to deal with the challenges associated with it on various levels.

Shoukry stressed during the meeting Cairo’s “great interest in the stability of the region and its keenness to follow up on current developments,” expressing “Egypt’s full support for all efforts aimed at strengthening peace and security in this region, which is a basic pillar of regional and continental security.”

According to analysts who spoke to Al-Monitor, the delegation visited Eritrea’s historical ally, Cairo, to request support and assistance and to inform it of developments in the conflict on the field after the Tigray People’s Liberation Front (TPLF) bombed the Eritrean capital Asmara airport Nov. 14.

On Nov. 3, the Ethiopian Federal Government’s military action escalated against the local forces in the Tigray region, causing hundreds of deaths and displacing thousands of people outside the borders toward Sudan.

The Ethiopian conflict was met with silence on the official Egyptian level, but Egyptian media close to the government criticized the behavior of Nobel Peace Prize winner Ethiopian Prime Minister Abiy Ahmed for fueling the conflict in his country.

Rakha Hassan, member of the Egyptian Council for Foreign Affairs, told Al-Monitor that Egypt seeks to remain at an equal distance from the parties to the conflict so that its stance is not misinterpreted as gloating about what is happening in Ethiopia, because this is an internal Ethiopian affair, and Egypt stands in a critical position due to the Grand Ethiopian Renaissance Dam (GERD) crisis.

Speaking about the visit of the Eritrean delegation to Cairo, Hassan noted that it is linked to discussions on bilateral relations and cooperation with Eritrea in the technical and expertise fields, as well as consultations on the conditions of the Horn of Africa and the current conflict near the Eritrean border in Tigray.

He said Eritrea is consulting with Cairo for Egypt to provide assistance based on its long experience in Africa and to put forward initiatives through the African Union (AU) to settle the Ethiopian crisis.

Hassan stressed that Egypt is keen on the stability of Sudan and Eritrea, since there are concerns about the Ethiopian conflict spreading to neighboring countries such as Eritrea, whose airport was bombed, and Sudan, to which thousands of Ethiopian refugees have flocked to escape the conflict.

The TPLF accuses Eritrea of participating with the Ethiopian army in the ongoing military operation in the region since Ahmed has had good ties with Eritrean President Isaias Afwerki since the signing of the 2018 peace agreement between them, for which Ahmed won the Nobel Peace Prize.

At the same time, Egypt has close historical relations with Eritrea, as the former played the largest role in supporting the latter for about three decades until Eritrea gained independence from Ethiopia in 1991.

Amani al-Tawil, a researcher at the government-affiliated Al-Ahram Center for Political and Strategic Studies, told Al-Monitor that the visit of the Eritrean delegation comes to put Cairo in the picture of developments on the ground in the Tigray region, pointing out the media blackout and the conflicting information about the conflict there.

She added that the visit might express Eritrea’s desire to coordinate with Egypt and Sudan according to the new balance of power, noting that on Nov. 14, the Egyptian and Sudanese armies began conducting first-time joint air maneuvers at Sudan’s Lt. Gen. Awad Khalafallah Air Base in Merowe and will continue until Nov. 26.

However, she ruled out the possibility of Egypt providing military support to Eritrea in the conflict, given Egypt’s traditional historical policy of distancing itself from inter-ethnic conflicts in Africa.

“If the conflict were to grow, it would not be in Egypt’s best interests … it needs Ethiopia to be a stable country, be it to resolve the GERD crisis or other issues,” Tawil noted.

The escalation of the crisis in Ethiopia comes at a time when Addis Ababa is facing a major dispute with Cairo over the GERD, which Egypt considers an existential threat, as the two countries, along with Sudan, have been engaged in arduous negotiations for a decade over this issue.

For his part, Riccardo Fabiani, a researcher on African affairs at the International Crisis Group, told Al-Monitor, “The recent visit is an attempt by Cairo to directly engage diplomatically in the current crisis in Ethiopia, which has had some repercussions in Eritrea as well.”

However, he doubted that Egypt would want to provide military support to Eritrea, because “Cairo still needs an agreement with Addis Ababa regarding the GERD, and Egypt either supporting the TPLF or encouraging Eritrea to intervene will only undermine its already strained relationship with Ethiopia.”

Fabiani added, “Ethiopia’s fragility and instability make the agreement with Egypt and Sudan more difficult. Besides, Ahmed’s weakness means that he will not accept a settlement with Cairo regarding the GERD.”

Amid the ongoing fighting in Tigray, a new round of the AU-sponsored GERD negotiations started Nov. 19 at the invitation of South African Minister of International Relations Naledi Pandor, who chairs the current AU Executive Council session, in the presence of the Irrigation and Foreign Ministers from Egypt, Sudan and Ethiopia, after the last round of negotiations held Nov. 4 faltered.

In a statement after the meeting, the Sudanese Ministry of Irrigation said that Pandor requested to continue negotiations on the Renaissance Dam in a new round that will last for the next 10 days, while Sudan expressed its reservation on the invitation, which it considered “useless,” and called for continuing negotiations according to a new methodology that gives a greater role for AU experts to bridge the gap between the three countries.

Meanwhile, Egypt stressed during the meeting “the importance of resuming negotiations in order to reach as soon as possible a binding legal agreement on filling and operating the Renaissance Dam, expressing its aspiration to participate in the next round of negotiations.”

“Cairo is well-aware that internal instability makes Addis Ababa less flexible in negotiations, so I would not be surprised if Egypt asked Eritrea to avoid responding to the recent bombing and stay out of the conflict,” Fabiani said.