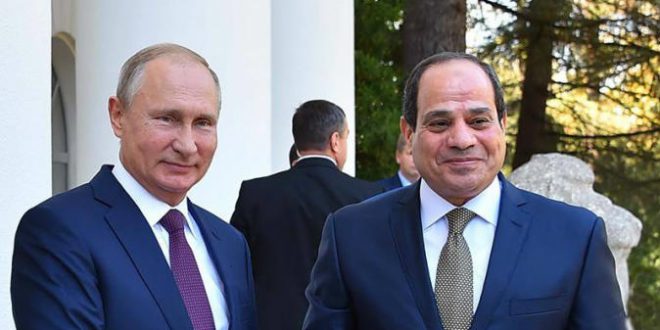 The reactionary alliance between Moscow, Abu Dhabi and Cairo

Moscow has gone from supporting progressive regimes in the Arab world, most of which were dictatorships — as was the Soviet Union — before the regimes lost their progressive character in the 1970s; to supporting reactionary regimes, most of which are permanently authoritarian. The most dangerous result of this political shift in the Arab region is the reactionary alliance between Russia, the UAE and Egypt.

The alliance is a by-product of the Russian intervention in the ongoing war in Syria, which in turn is a product of the passive position taken by the Barack Obama administration in the country. When Russian President Vladimir Putin saw that Iran’s own intervention itself did not lead to Washington to act against him, he decided to engage in the conflict. That was five years ago, against the backdrop of the Obama administration’s preoccupation with fighting Daesh and Europe’s struggle to cope with the influx of Syrian refugees. History will show that Iran’s intervention to save the Syrian regime of Bashar Al-Assad played a major role in stopping the revolutionary tide that came out of Tunisia ten years ago. Since then, of course, Abdel Fattah Al-Sisi has seized power in Egypt and Libya and Yemen have been turned into two battlefields.

When Obama chose to keep up with the revolutionary tide known as the Arab Spring in an attempt to contain it, he developed connections with the Muslim Brotherhood which took advantage of the regional uprisings. With limited intervention in Libya in the hope of controlling the uprising there, Putin decided to adopt an opposing stance by supporting the existing regimes and keeping pace with the counter-revolutionary forces. The cornerstone of this reactionary policy was his support for the political and military rigidity of the Syrian regime, although he did not directly throw his forces into the conflict until he was convinced that the risk of a US response was negligible. Putin welcomed Sisi’s coup when Washington was expressing reservations about it. It was, therefore, natural in this context for Moscow to meet with Abu Dhabi on the common ground of opposing revolutionary change in the region, hostility towards the Muslim Brotherhood and conflicts with those who support the movement.

Donald Trump replaced Obama as US President and adopted a sympathetic stance towards Putin and hostility towards the Brotherhood, which in turn affected the Saudi position. Abu Dhabi decided to move forward in its relationship with Moscow. The relationship was cemented by the treaty signed by UAE Crown Prince Mohammed Bin Zayed and Putin in Moscow in June 2018, during the seventh visit that the Emirati leader had made to Russia since the Arab world made a reactionary shift in 2013. Since then, a retroactive regional alliance has established itself, between Russia, the UAE and Sisi’s Egypt, linked to Saudi Arabia by a relationship ranging between cooperation and competition.

The rapprochement between the three states was evident in the nature of Arab trade deals, especially the UAE’s purchase of Russian weapons, as well as in NATO’s cooperation in various regional arenas. This includes Syria, with the support of Abu Dhabi and Cairo as the pawns moved by Moscow. In Yemen, meanwhile, Moscow’s support for the Houthis has shifted to what suits the manoeuvres of the UAE and the militias it backs. In Libya, Abu Dhabi is financing the intervention of semi-official Russian Wagner Group mercenaries fighting alongside Khalifa Haftar’s forces supported by Cairo. The alliance has manifested itself in Palestine by strengthening cooperation with the Israeli government, notably the UAE’s normalisation of relations with the occupation state. It is worth pointing out that the former Palestinian Fatah official Mohammed Dahlan is an advisor to Bin Zayed and plays an important role in this and other matters, including Syria.

Last but not least, the alliance’s activity was evident in Sudan, where the guardian of the Sudanese military, the UAE, mediated between its senior officials and Russia, after doing the same job between Khartoum, Washington and Israel. The result was that the Sudanese military-led transitional government gave Moscow permission to build a naval base on Sudan’s Red Sea coast. Abu Dhabi and Cairo see this as a deterrent to Turkey, which has a base on the Somali coast, as well in Qatar. It is no secret to anyone that this tripartite alliance is fighting Turkish influence across the region, as well as in the Caucasus, even though the Russian and Turkish presidents continue to display mutual friendship despite stabbing each other in the back.

It is also clear that the UAE hastened normalisation between Sudan and Israel and facilitated Moscow’s Sudanese naval facilities in anticipation of Trump losing the election this month. The US president is a friend of Bin Zayed, Putin and Sisi, as is his foreign policy engineer, Mike Pompeo, who is fiercely hostile to Turkey. Thus, the tripartite alliance has placed before Washington a fait accompli of serious strategic importance, with Moscow, Abu Dhabi and Cairo gambling on US President-elect Joe Biden continuing to follow Obama’s disappointing approach and thus not affecting their efforts in any significant way.