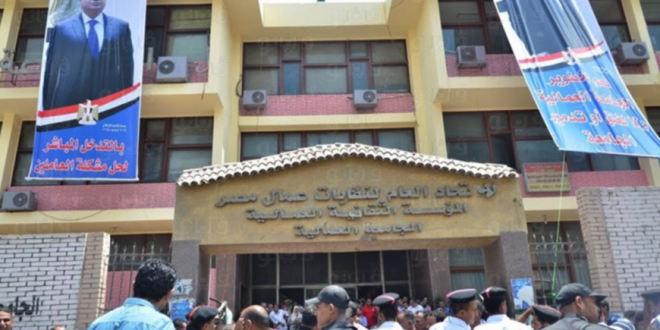 On Oct. 5, hundreds of employees from Egypt’s Workers University, a private university with 14 branches across the country, began a strike and sit-in to protest the fact that some 4,000 workers had not received their salaries in September amidst rumors that October salaries would also not be paid. The employees’ patience had run out after the management’s failure to disburse salaries on time since May, and they asked it to step down and be replaced.

The Egyptian Trade Union Federation, owner of the university, attributed the delays to the COVID-19 crisis. Yet according to a statement from the Center for Trade Union and Workers Services (CTUWS), a nongovernmental organization for independent unions, the origins of this crisis go back to 2015 when the university was banned from granting baccalaureate degrees, a move that led to a severe drop in the number of students. Since then, employees have not received bonuses and other work incentives such as pensions and insurance, according to the CTUWS.

The Workers University protest echoed similar labor mobilizations over the last months in Egypt concentrated mainly in state-owned companies. They reflect a growing concern about the repercussions of a series of recent legislative reforms that affect the sector and increasingly precarious work and job insecurity, both worsened by the coronavirus pandemic.

The Labor Protests and Social Movements Monitoring Center of the Arab Network for Human Rights Information (ANHRI) has documented at least 123 labor-related protests so far this year involving thousands of workers, ANHRI’s executive director Gamal Eid told Al-Monitor. The number of mobilizations started to increase in July, following the easing of the preventive measures imposed to curb the spread of the coronavirus.

Sectors that have witnessed more protests include textile, industrial, transport and communications, according to the ANHRI’s coverage. Other sectors include health and tourism, severely affected by the COVID-19 crisis, and the construction sector, affected by the reconciliation law regarding construction violations. The mobilizations have adopted a variety of protest methods such as gatherings, sit-ins, complaints and strikes. The ANHRI has also documented the suicide of a number of workers due to poor economic conditions.

On Sept. 5, President Abdel Fattah al-Sisi ratified a law amending some provisions of the Public Business Sector Companies Law of 1991. The amendments aim to further regulate the historic state-owned enterprises in Egypt, taking as a framework the standards of the country’s far more precarious private sector. Its supporters have praised the amendments for reforming and streamlining public companies, yet its detractors have warned that they will undermine these companies and the rights of their employees. The redefinition of the sector has long been among the main structural reforms required by the International Monetary Fund.

In Article 38, the amendments stipulate that those state-owned companies incurring losses that reach their shareholder equity will have three years to adjust their financial positions by increasing their capital. Otherwise, an extraordinary general assembly will have to be held in order to decide whether to merge the company with another one or to liquidate it.

Gibali al-Maraghi, head of the parliament’s Labor Committee, warned that this amendment would push around 40% of state companies into liquidation, according to Al-Ahram. Public Enterprise Minister Hisham Tawfik has said that two state-owned companies have already closed to this day, according to Al-Borsa News.

The previous amendment is particularly troubling given that the amendments also cement the workers’ marginal representation in the management boards of public companies. Before the amendments were passed, workers from public companies had to account for at least half of its board of directors. Now, their representation has been cut to one or two members out of a total number that ranges from five to nine members, including the chairman, as stipulated in Article 3. This section also allows for the appointment of up to two additional “independent” members with experience in the company’s field. This way, the workers’ representation in the board of directors will range from 17 to 25% at best. Al-Dostor reported in August that the Public Enterprise Ministry plans to select 90% of the future chairmen from private companies’ executive directors.

“Public business sector companies have represented a great weight in the structure of the Egyptian economy for many decades, and social support and a protection network for the popular classes have been linked to them. In addition to providing job opportunities, their products were subsidized, health care and housing were provided to their workers, and they participated in technical education through vocational training centers that guaranteed direct jobs to their graduates,” Rahma Rafat, the CTUWS’s legal adviser and program coordinator, told Al-Monitor.

“The liquidation or the privatization of many of these companies [will] lead to the shrinkage of this network, and no suitable alternatives have been provided,” she noted.

In parallel to the amendments ratified in September, a bill that aims to standardize wage schemes in public companies is also facing strong opposition. Tawfik has tried to defend that the bill will not cut wages and could even increase them, according to Al-Borsa. But company unions and workers have been less enthusiastic about the so-called unified regulations or unified wage bill. According to the results of a meeting organized by the CTUWS, most trade union actors reject the draft regulations, as they warn that these could effectively reduce the wages of some workers by up to 50 or 60% due to the reduction of allowances, which make up the largest part of their salaries. Tawfik has said that he plans to listen to them but not hold a dialogue. Three workers are still in pre-trial detention after being arrested following a protest against this bill, Rafat said.

“The bill, if issued and implemented, will affect wages through incentives and some benefits that workers enjoy, in particular health care, transportation and supplementary insurance funds,” Rafat explained.

She pointed out that the confusion surrounding the fate of state companies among workers and their fear of losing some of their rights are among the main reasons behind the protests that have taken place in Egypt over the last months. She also argues that their working conditions are already deteriorating, given that their salaries in the sector are stagnant or increasing slightly despite the sharp price increase over the last years in Egypt.

“It is expected that if the government insists on issuing and implementing the unified human resources regulation, this will lead to protest movements in many companies,” Rafat anticipated.