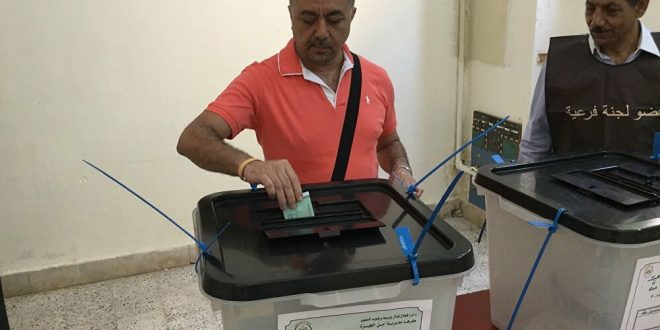 Election violations have continued in the second round of elections for the House of Representatives as voters turn out in 13 governatores and the pro-state Nation’s Future Party moves to secure its ruling majority.

Sunday marks the second and final day of voting in round one of the second phase of House elections for residents of Cairo, Qalyubia, Daqahliya, Monufiya, Gharbiya, Kafr al-Sheikh, Sharqiya, Damietta, Port Said, Ismailia, Suez, and North and South Sinai.

As with the first phase of elections, which took place from October 21 to October 25 for the other half of Egypt’s governorates, the process was rife with violations.

During a morning tour of voting stations in the Amireya, Sawah, and Zatoun districts in northern Cairo, Mada Masr reporters noted early Saturday morning that campaign representatives were lining up outside polling stations to strike deals with microbus drivers to drive voters to and from their homes or workplaces throughout the 12-hour voting period, in exchange for a fee of LE 300 to 350 plus lunch.

Microbus drivers in the Sawah neighborhood told Mada Masr that campaign representatives struck a deal with them over the past few days to drive people from a number of charity organizations and companies to schools that have voting stations in order to cast their votes, which was also corroborated by some voters.

According to the drivers, there was some haggling with the representatives over what each driver would receive per election day, which started at LE250 then went up to LE300.

“They asked us to put a mark next to the first and second pictures on the big paper, and another mark next to the first picture on the small paper. And they said they will give me LE200,” a 50-year-old woman who was brought to the voting station in Matareya in a microbus told Mada Masr. She was referring to the Future of a Nation candidates, whose names were placed at the top of the voting ballot for the individual lists by the National Elections Authority. The first picture on the small ballot refers to the Nation’s Future Party-led National List for Egypt in the ballot allocated for group lists, which is smaller in size than the individual candidate ballot.

The National List for Egypt won all 142 seats available in the north, central and south Upper Egypt and West Delta regions during the first phase of voting in the elections in October.

Candidates were not only relying on microbus drivers but paying voters directly to have them cast their vote, a practice that was also prevalent in the first round of voting two weeks ago.

On Sunday, several voters told Mada Masr that the cost of an electoral vote in the Gamaliya district of Cairo was coming in at LE500, with an expectation that it would increase closer to the 9 pm closing time for polling stations.

The Gamaliya district includes the neighborhoods of Gamaliya, Moski, Mansheyet Nasser, and Bab al-Shariya. The latter used to be an independent district before being added to Gamaliya at the start of this election cycle under the terms of restrictive redistricting legislation, reducing the area’s seats from three to one. Sixteen candidates are currently competing over this seat, including three current MPs: Hany Morgan, Mona Gaballah, and Nabil Boules, who is the current MP for Bab al-Shariya.

No individual candidates from the Nation’s Future Party, the entity most closely linked to political money in the first phase of the election phase, are running in Gamaliya district, even though Morgan and Boules are members of the party’s high board. But party leaders were not able to convince either of the candidates to concede their seat to the other and compete as independents, according to reporting from Al-Masry Al-Youm.

In Mansheyet Nasser, the cost of a vote ranges from LE80 and LE500, according to Aly Ibrahim, a driver from the neighborhood. Ibrahim told Mada Masr that Heidar Boghdady, a candidate and former MP for the National Democratic Party, who died this morning, paid LE80 per vote. Hany Morgan was paying LE100 per vote and gathered voter identification cards in his car maintenance shop in the neighborhood one week ahead of the elections. Amr Hamza paid LE200 per vote, and Hossam Zaki increased the price he was paying to LE450 per vote, after paying LE300 per vote on the first day.

Ibrahim added that MPs Mona Gaballah and Nabil Boules are paying LE500 for each vote in the Zarayeb neighborhood of the Zabaleen district.

Mahrousa al-Sayed, a 54-year-old woman who lives in the Qayitbay neighborhood of Mansheyet Nasser, told Mada Masr that the representatives of Hossam Zaki rented the kiosks and small shops in the neighborhood on Thursday and used them to collect voter IDs and determine the electoral stations for each voter. They divided them according to their stations and then arranged for microbuses to pick up each group to drive them to the polling booth, along with a candidate representative. After voting, the voters get their IDs along with LE450 each.

Outside the capital, the Nation’s Future Party and security forces were working to ensure a decisive win for the pro-state party.

The head of a village in Daqahliya told Mada Masr that the head of Daqahliya’s security directorate issued directives to all leading village figures affiliated with the governorate to rally citizens to vote for the Nation’s Future Party candidates. The directives also targeted big businessmen in the city, who have held a few meetings with the head of security directorate, the last of which was on Thursday, according to the village head, who spoke to Mada Masr on condition of anonymity.

The head of security told those assembled that the continuation of their leadership positions depend on whether people go out and vote for the Nation’s Future candidates, adding that he will have to pass by people’s houses in the village himself to make sure they went to vote, according to the village head.

Poll stations across the country witnessed a low turnout in the early hours of voting on Saturday, followed by a moderate turnout after 2 pm, when the microbuses carrying voters started arriving at the stations.

Current MP Ahmed El-Tantawy, a candidate for the Kafr al-Sheikh and Qilin constituency in Kafr al-Sheikh, said that his district witnessed a number of violations, including in the use of political money. As of 3 pm on Saturday, however, Tantawy had not observed any systematic violations backed by state agencies to push the scale in favor of the Nation’s Future Party candidate or any other politician.

The opposition MP asserted that while state institutions are responsible for preventing election violations, especially bribery and buying votes, they have instead stood by and let these violations happen. On the other hand, there is no evidence that state institutions are systematically working against a specific candidate, Tantawy states, adding that he is betting on the conscious will of voters in his district.

“I will not accept any inaccuracies in the results or a flawed procedure,” he stressed, adding that the violations he observed in his district so far will not affect the will of voters, and that the picture will be clearer by the end of the second election day, when the counting procedures start.

Meanwhile, the appeals made by a number of candidates in the first phase against the National Elections Authority are still under consideration by the Supreme Administrative Court, which will announce its verdict on Monday, regarding the appeal made by MP Mohamed Fouad. Fouad filed a lawsuit to vacate the victory of his Nation’s Future Party opponent for the Omraneya and Talbiya seat, according to Fouad’s lawyer, Ahmed Shousha.

On Friday, the Supreme Administrative Court reviewed 108 electoral appeals for results across the 14 governorates in the first round of elections. Most of the cases were postponed to tomorrow’s session.

Shousha added that, during yesterday’s session, he asked the court to vacate the election result, providing documents that prove there was fraud in the vote count during the compilation of ballots from the booths within the main voting station, including an official copy of the record keeping documents from in the booths, which show that almost 150,000 votes were added to the total vote count, even though the booths received no more than 56,000 voters. Shousha stressed that the election results were tampered with in order to tilt the scales in favor of Mohamed Abdelhamid, the Nation’s Future Party candidate, whom the National Elections Authority announced as the winner of the Omraniya and Talbiya seat.

On October 31, two Giza candidates announced that there was a discrepancy between the vote count they received from the booths, which was stamped by the judge overseeing the ballot box, and the results announced by the main voting station, which compiles all the counts from the booths and announces the result, which is verbally told to the candidates. The discrepancy in votes was in favor of the Nation’s Future Party candidates Ahmed Noweisar in the Saf district and Shehata Abou al-Yazid in the Atfih district, with each winning by more than 50,000 votes each. The National Elections Authority announced their victory on November 1.