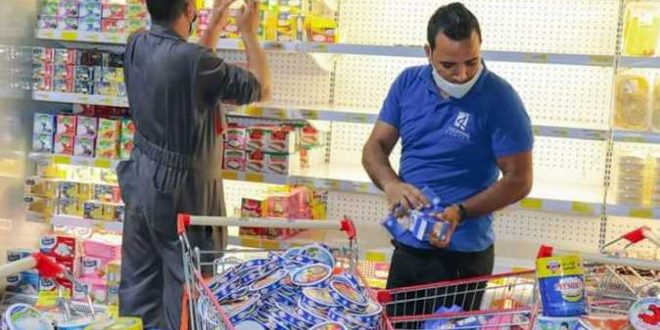 A major supermarket chain in Egypt has taken French goods off its shelves in response to anti-Islam comments made recently by French President Emmanuel Macron, possibly setting off similar moves by other commercial outlets in the Muslim-majority country.

The 4 Shopping Mall in Sadat City, 94km northwest of the Egyptian capital Cairo, said on Sunday that it was removing French goods, including different types of cheese and other foodstuffs, from public sight in response to Macron’s comments.

“We know the decision will cause us some losses until we find alternatives to the goods taken down,” Mohamed Hadi, the mall manager, told MEE. “We are doing this for the satisfaction of God and in retaliation for offences against our religion.”

Macron publicly backed the right to publish satirical caricatures of Islam’s Prophet Muhammad and accused Islam of being a “religion in crisis”. The president made the remarks while paying tribute to a French school teacher, Samuel Paty, beheaded by a Muslim radical on 16 October after he had shown caricatures of the prophet to his school pupils.

Paty’s gruesome murder has drawn angry reactions from Islamic institutions in Egypt, including from al-Azhar, the highest seat of learning in the Sunni world. Al-Azhar’s grand imam, Sheikh Ahmed al-Tayeb, denounced the crime, but said insulting religions in the name of free speech was an “invitation to hatred”.

The same insults were stirring up a major wave of anger in Egypt, where ordinary people were giving vent to their feelings through numerous invitations to boycott French products.

Many social media users had replaced their profile photos with phrases glorifying the prophet. Some people had also published lists of French brand names and asked consumers to boycott them to avenge Islam for what they described as an “Islam-hating” French president.

Some commercial outlets were heeding such calls and removing French goods from their shelves.

The 4 Shopping Mall published photos on 24 October of its workers removing French foodstuffs from its shelves.

Under the photos, the mall administration wrote that it had decided to take the French goods off its shelves in response to the humiliation of Islam by Macron. The photos received an avalanche of welcoming comments, including by people who had expressed hopes that other commercial outlets would do the same.

The mall removed the same photos a day later.

Nonetheless, other commercial outlets were considering similar moves. The manager of a major supermarket chain in Cairo said the management of the chain was thinking of removing French goods from its shelves.

“The workers of the chain have already addressed the management and called for boycotting French goods,” the manager, who asked to remain anonymous, said.

A kitchenware store in the southern Cairo district of Mokattam said it would move French products to its warehouse and stop selling them.

“There are 1.5 billion Muslims around the world,” Abdel Qadir said in a video he posted on the Facebook page of his store. “Those who offended our prophet have to know that the prophet is much more important to us than buying and selling.”

The campaign to boycott French goods was still in its initial stages in Egypt and nobody could predict how far it would go.

Some people expected the campaign to assume national proportions in the coming period, given the high wave of public anger after Macron’s remarks.

However, the same campaign was opposed by the mainstream media and some pro-state preachers who said that boycotting French goods would only harm Egypt and Egyptians, not the French.

Renowned preacher Khaled al-Guindi advised consumers not to participate in the campaign.

“Be rational,” Guindi advised viewers of the local television channel DMC, where he presents a religious programme, on 25 October. “If you want to gratify Prophet Muhammad, mimic his manners and let us see this.”

TV host Amr Adeeb, who presents a daily talk show on the Saudi television channel MBC, said Muslims had the right to get angry at the remarks made by the French president.

“This is very provocative,” Adeeb said of the remarks. “Why should French freedom of speech come at the cost of Muslims?”

“Most of the goods on the shelves in the supermarkets here are made in Egypt, even as the mother companies can be in France,” he said on Sunday.

The fledgling boycott campaign against French goods came at a time when Egyptian-French economic relations were thriving.

In 2019, trade between the two countries had reached $3.5bn. France had invested around $6bn in Egypt in total. There were around 165 French companies operating in the country of nearly 100 million people, employing 38,000 Egyptians.

This makes France a leading trading and investment partner for Egypt. French companies operate in the Egypt’s industrial and agricultural sectors and in the manufacturing of electrical equipment. They are also active in the pharmaceutical, retail, tourism and infrastructure sectors.

However, the Egyptian private sector, economists said, could easily do without French goods if the boycott campaign widened in scope.

“The private sector will have to stop importing French goods if consumers abstain from buying these goods,” Alia al-Mahdi, a professor of economics at Cairo University, told MEE.

Since 2004, an Association Agreement has been in force between Egypt, on one hand, and European Union States, including France, on the other. The agreement created a free trade area between the two parties by removing tariffs on industrial products and making agricultural products easier to trade.

Despite the lack of official support for a boycott of French goods, some economists believed that a boycott could benefit the Egyptian economy, as people would spend more on domestic products.

Underpinning the lack of official Egyptian support for a boycott of French goods are the shared political and geostrategic interests of the two nations: both countries on the Mediterranean which have been united in recent years by developments in the region – especially by events in Libya and the struggle over resources in the Eastern Mediterranean, analysts said.

“Egypt and France are real allies that have strong relations in all economic and political fields,” Akram Badreddine, a professor in political science at Cairo University, told MEE.

“This is why I say the developing public boycott of French goods is only an expression of public anger against the remarks of the French president, not a reflection of an official position towards France.”

The two countries backed the same party in Libya, namely the Libyan National Army of Khalifa Haftar, who controls most of eastern and southern Libya. France and Egypt are also united with Greece and Cyprus against archrival Turkey.

But the public boycott campaign against French goods puts the Egyptian government on the spot, even if Cairo ultimately did not alter its policy toward Paris because of this campaign, observers said.

“Of course this public move causes embarrassment to the government,” Said Sadek, professor in political sociology at the American University in Cairo, told MEE. “However, the authorities cannot force the public to buy or not buy French products.”