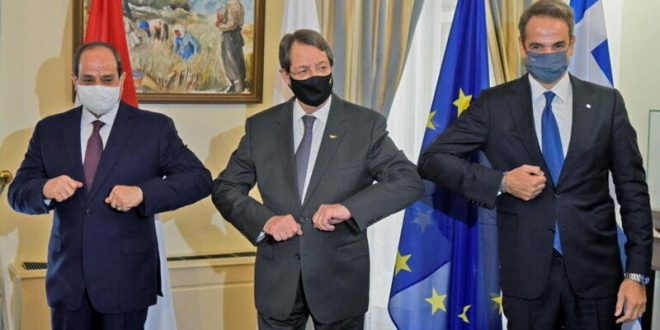 Turkey has denounced a joint statement issued by Greece, Cyprus and Egypt in which the trio slammed Ankara for conducting “illegal” activities in the contested Mediterranean waters that threatened peace and stability in the region.

The Foreign Ministry said in a statement Thursday that it rejected the “baseless accusations and claims against Turkey,” adding that such allegations were typical of the trio.

“The countries causing the problems in the region cannot be part of the solution unless they abandon their maximalist and hostile policies,” read the statement. “Turkey will continue to resolutely protect both her own rights and those of the Turkish Cypriots in the Eastern Mediterranean.”

Turkey says it has maritime rights to areas in the eastern Mediterranean Sea that are home to potential offshore gas reserves and where Cyprus, Greece and Egypt also claim jurisdiction. The simmering territorial dispute escalated earlier this summer after Ankara deployed its Oruc Reis research vessel to conduct exploratory work near the Greek island of Kastellorizo.

Last month, Turkey pulled the vessel for maintenance and to give “a chance to diplomacy” with Greece. But Turkey resumed its energy research in the disputed territory last week and on Wednesday, the Turkish Navy said it would be extending the exploratory mission of the Oruc Reis and two other vessels by five additional days, through Oct. 27.

Calling on Turkey to “terminate its provocative actions,” the leaders of Cyprus, Greece and Egypt condemned the “illegal” Turkish drilling and seismic operations in a joint statement Wednesday that followed their trilateral summit.

“We expressed our grave concern over the recent escalation within the maritime zones in the eastern Mediterranean and the increased militarization of the area that threatens the wider stability, peace and security in the Mediterranean Sea,” said Cypriot President Nicos Anastasiades, Greek Prime Minister Kyriakos Mitsotakis and Egyptian President Abdel Fattah al-Sisi.

Athens called on the European Union Wednesday to consider suspending its customs accord with Ankara, accusing the country of repeatedly violating the agreement. EU leaders have warned sanctions are on the table if Turkey’s “provocations” in the Mediterranean persist.