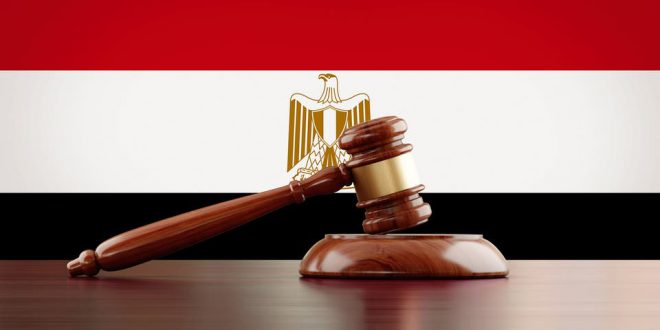 The scheme, developed by the ministries of justice and communication, will allow judges to preside over remand detention renewal hearings by video conference through secured, closed-circuit television networks that will link courts to prisons where defendants are held.

Phase one of the project, which was inaugurated by Justice Minister Omar Marwan and Communications and Information Technology Minister Amr Talaat, will connect the New Cairo Court to Tora Prison Complex, and the May 15 Prison and Nahda central prison, with a plan to expand the new procedures to the entire court system.

In his announcement on Sunday, Marwan stressed the importance of rolling out the new scheme to all courts “in terms of speed of investigations and security,” as well as “limiting the spread of the coronavirus between detainees and citizens.”

Yet three lawyers who spoke to Mada Masr decried the new procedures, saying they undermine legal guarantees for a fair trial and threaten the rights of defendants, particularly political prisoners. The video conference sessions also go a step further than the already exceptional settings defense lawyers have had to contend with over the last several years, with many court sessions taking place inside prison or the Egyptian Police Academy in New Cairo. The attorneys also say the project is an infringement by the executive authority, represented by the Justice Ministry, on the legislative authority which has not introduced amendments to the Criminal Procedure Code that would allow for remote trial sessions.

According to lawyer Khaled al-Masry, the direct meeting of judges and defendants is one of the most important guarantees of due process, because it allows the accused to communicate face-to-face with the judge and inform them of any assault or abuse the detainee may have been exposed to without fear of being harassed by prison officials. Masry also says the Justice Ministry has not clarified the mechanism by which defense attorneys will attend the video conference sessions — whether they will be in court alongside the judge, with the defendant in their place of detention, or in a separate room allocated for lawyers. Media reports have indicated that lawyers will be inside prison alongside the defendant to attend the detention renewal sessions, a notion Masry says is inconceivable from a practical standpoint.

“If I attend the session in prison with the defendant and I have documents that I want to present, how will I submit them to the court?” Masry asks. “If I am in court and the defendant wants to inform me of abuse he suffered in prison, how will they tell me?”

Ahmed Abdel Latif, a lawyer with the Arab Network for Human Rights Information, points out that many lawyers are already struggling with the common practice of courts failing to inform them of their clients’ legal proceedings, especially in sessions before the State Security Prosecution. He predicts that conducting detention renewal sessions remotely will dramatically increase the number of defendants being investigated without their lawyers present.

A case in point, Abdel Latif says, came earlier this month, on October 6, when he and a number of other lawyers were inside the police academy to attend a number of sessions with defendants and were surprised to discover that the State Security Prosecution had ordered 52 detention renewals, involving nearly 600 defendants, none of which they had been informed about.

Abdel Latif also points to the fact that the Justice Ministry did not make use of video conferencing technology at the height of the coronavirus outbreak in Egypt when prisons were closed and visitations canceled between March and August. During this period, detention renewal sessions went ahead without defendants attending and hundreds had their detention renewed in absentia.

Lawyer Khaled Ali also points to the fact that the criminal procedures law in its current form does not allow for remand detention to be renewed remotely and would require a legislative amendment that defines standards and procedures for remote court sessions and guarantees the rights of defendants and their attorneys. Ali points out that the new economic courts law does have a section that outlines a mechanism for remote trials but this does not pertain to criminal courts where the project is being launched.

Alaa Samhan, Deputy Minister of Justice for Media Affairs, pushed back on this point, telling Mada Masr that conducting remand detention renewal sessions remotely does not require a legislative amendment to the Criminal Procedure Code and that the Justice Ministry is responsible for overseeing the practice. Samna said the New Cairo Court has already held a number of remote sessions with lawyers present alongside defendants inside prisons. Samhan noted that detention renewal sessions will be conducted by video conference only when they are held before a judge in court while defendants will continue to appear in person for renewal sessions held before the prosecution.