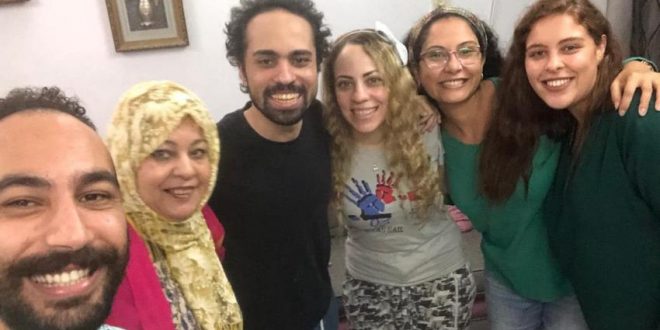 A Giza criminal court ordered the release of satirist and video blogger Shady Abu Zaid with probationary measures late on Saturday, according to his lawyers.

The lawyers said Abu Zaid will still need to report to a police station twice a week.

Abu Zaid was arrested in May 2018 after being charged with “membership of a banned group” and “disseminating false news”.

According to reports, during his arrest nearly two dozen police personnel raided his home at dawn, searching through his belongings, including his laptop and mobile phone.

Abu Zaid rose to fame in Egypt after a satirical video, in which he inflated condoms and handed them to police officers as balloons in Tahrir Square on the sixth anniversary of the 2011 revolution, went viral.

He worked as a correspondent for a satirical puppet show called Abla Fatiha  until 2016. The show was cancelled for its political commentary, despite being watched by millions.

Abu Zaid also produced a satirical YouTube show called The Rich Content, which featured comic interviews with Egyptians about current affairs. In one of his videos, he mocked censorship in Egypt by making a fake interview with a censorship official. Most responses by the guest are bleeped.

Issues tackledThe news of Abu Zaid’s release was met with both elation and scepticism online.

One Twitter user wrote: “Shady Abu Zaid has been released after two and a half years of pre-trial detention without trials. It is with caution that I celebrate this wonderful moment when Shady spends a night at home.”

Last year, footage of Abu Zaid embracing the coffin of his deceased father went viral, after authorities accepted his lawyer’s request to release him from prison to attend the funeral.

Earlier this year, Shady Habash, an Egyptian film director and photographer, died in Egypt’s Tora prison at the age of 24.

Habash was imprisoned in March 2018 over directing a song that mocked Egypt’s President Abdel Fattah el-Sisi.

Amnesty International has repeatedly called for the release of political prisoners in Egypt and called the crackdown on dissent in Egypt “one of the worst in recent history”.

Human rights groups estimate that there are around 60,000 political detainees in Egypt, including journalists, bloggers, political dissidents, lawyers and activists held in prisons.

DetentionICT and Media GovernanceJustice
Giza
2020-10-18
asaeid
Previous An Egyptian or Russian message?
Next 8 residents killed in explosions after Armed Forces allow displaced residents of Bir al-Abd to return to villages