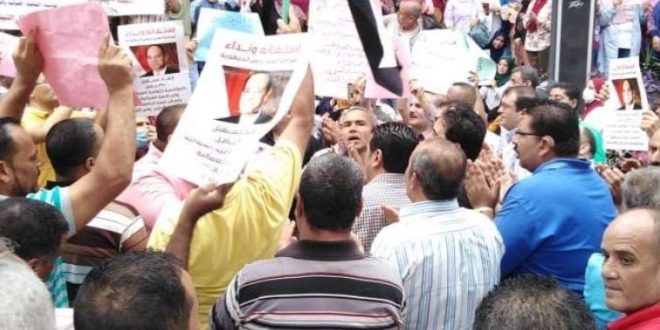 Hundreds of workers at the Workers Cultural Foundation and its affiliated Workers University staged a sit-in on Saturday to demand receipt of their salaries and to petition for oversight of the university to be removed from the Egyptian Trade Union Federation (ETUF), according to three workers who spoke to Mada Masr, one of whom is the head of the trade union committee for the foundation and university.

According to a statement published by the Center for Trade Union and Workers Services (CTUWS), an independent labor NGO,  on October 7, workers in the university’s main branch in Cairo staged a sit-in on October 5 “to protest the non-payment of wages and salaries of September and the mounting possibility that October’s salaries of more than 4,000 university workers will also not be paid.”

“The university has failed to adequately pay out the wages and salaries of workers since May, as the administration disbursed the salaries of May, June, July and August in half-monthly installments, then stopped disbursing salaries altogether in September,”  the statement read. “This all happened amid repeated statements and threats by Gabaly al-Maraghi, the head of the ETUF and chairman of the university, that university employees will only receive half their wages.”

Following the sit-in, the Minister of Manpower Mohamed Saafan chaired a meeting of the ETUF board of directors on Monday. At the close of the meeting, Saafan and the chairpersons agreed that the salaries of the Workers University and Workers Cultural Foundation would be paid by the end of the week, while the foundation’s board of directors would be restructured and some of the university’s land assets sold.

The workers have yet to issue a response to the meeting’s outcomes.

“It’s been about a year since we started receiving our salaries in two installments and taking relief payments that are equivalent to a third of our salaries from the Manpower Emergency Fund. They’re accusing us of stirring up a storm, but there is no such thing. We want to work, and we’re calling on President Abdel Fattah al-Sisi to intervene. We have many assets, and all we’re asking is to change the administration because the ETUF has failed,” says Mahmoud Atta, who works as a financial manager at a workers’ residence affiliated with the cultural foundation.

“There are no salaries, no grants, no bonuses and no promotions. Since 2015, a percentage of our salaries have gone to special funds, like pensions, insurance, solidarity, fellowships, and medical care. This money was never returned, and we even discovered that we still owe money to those funds,” says Sohair Hamdy, the general manager of public relations at the cultural foundation.

“We have around 3,500 workers across the country. And we’re asking to transfer management of [the unicity and foundation] to any other organization, whichever Sisi decides. We want an organization that will foster us and preserve the university and the foundation’s assets, which are worth billions. Workers are hungry, and the administration couldn’t care less about them,” says the head of the trade union committee in the university and the foundation, who added that the union committee has sent formal letters to the president, the prime minister, and other authorities since the end of September, but no one has responded to them yet.

According to the statement published by the CTUWS and Atta, the university crisis dates back to 2015, when the Higher Education Ministry gave the university a year to form a board of trustees and develop the curricula to comply with the requirements of the ministry. The federation’s board of directors ignored the request, after which the ministry issued a decision in 2016 to ban the university from granting baccalaureate degrees to students and to only issue them a two-year diploma certificate, which wouldn’t allow students to pursue postgraduate studies. This led to a drastic decline in the number of students who applied for the university, with the number of students plunging from 35,000 to 1,000. The drop in admissions severely curtailed the university’s resources. In 2019, the Cabinet ordered the formation of a committee to study the situation of the university that repeated the same recommendations to move the university into the hands of a board of trustees, and away from the ETUF’s management.

According to Atta, Hamdy and Sharaf Eddin, the ETUF ignored the development plans and did not form a board of trustees.

“The federation sacked any university administration that tried to develop the university in order to allow it to bestow bachelor’s degrees,” says Sharaf Eddin. Further, the salaries, financial ruminations and insurance benefits — such as contracts with hospitals for medical care —  that workers used to receive were all reduced under the pretext of development that never actually took place, according to Atta.

The ETUF issued a statement on Saturday, in which it emphasized that the federation is responsible for workers’ salaries and that it will not abandon the workers of the university. “The failure to disburse salaries was due to the COVID-19 crisis, which has affected many other sectors,” the statement said. The head of the trade union committee tells Mada Masr that the statement is “dishonest” and that “they have been in a crisis long before the coronavirus.”