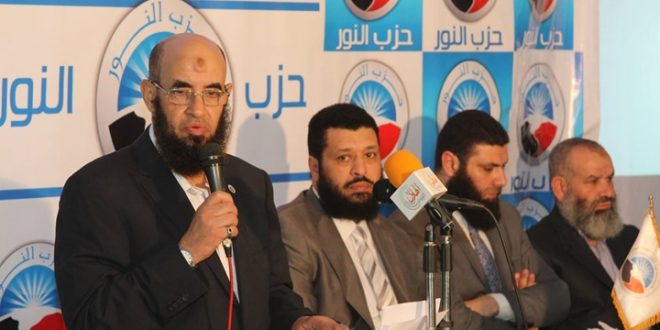 The failure of Egypt’s largest Salafi party to win any seats in the recent Senate elections raises questions about the prospects of the party as well as the future of political Islam in the country.

Al-Nour, founded following the 2011 uprising against autocratic President Hosni Mubarak, fielded 12 candidates who ran as independents in nine out of Egypt’s 27 provinces.

Eight candidates lost in the first round of the elections, which took place Aug. 11-12.

Four other candidates secured a place in the election runoff, which was held Sept. 8-9.

However, they lost too, pointing to what some analysts describe as a “drastic” change in voters’ moods.

“There is a noticeable change in the mood of the voters who are no longer ready to accept political parties with religious backgrounds,” Cairo University political scientist Akram Badreddine told Al-Monitor. “Ordinary people view the Salafists as representing the same political brand as the Muslim Brotherhood.”

Egypt’s Salafists have come a long way since the 2011 uprising, demonstrating a high degree of pragmatism.

They stayed away from politics for decades before the uprising, preferring to focus on religion and inviting people for prayer.

They have a strict interpretation of Islam and many have a low view of non-Muslims and see women as being subservient.

The Salafists have a strong following in the Nile Delta. They have their stronghold in the northern coastal city of Alexandria, where they control most mosques.

Come the 2011 uprising, the Salafists found a chance to advance their agenda in the new Egypt that was evolving then, like other Islamists did, including the Muslim Brotherhood, the movement of the late President Mohammed Morsi.

They formed several political parties, including Al-Nour, the political arm of the Salafi Invitation, by far the most important umbrella organization of the nation’s Salafists.

Having organized themselves into political parties, the Salafists had to tailor their strict worldview to realities on the ground.

They had to answer questions on issues taken for granted in developed countries, but still under debate in Egypt, such as the status of women and non-Muslims in society and whether visiting antiquities is a sin. The Salafists were debating whether visiting ancient sites was against the Islamic religion. Some Salafi figures called for covering the faces of ancient statues with wax. Others called for destroying them, considering them deities that date back to pre-Islamic times.

Salafi politicians tried to attune their answers to these questions to what the media in Cairo liked to hear.

Nonetheless, answers to the same questions by some Salafi sheikhs divulged a wide chasm between the new political class and moderates.

In 2012, a Salafi sheikh called for the destruction of the Great Pyramids of Giza. Another said Muslims should not congratulate Christians on Christian religious occasions.

Such views gratified a number of Egyptians, especially conservative ones. And many voters backed the Salafi parties in the elections that followed the 2011 uprising.

The Salafi parties Al-Nour, Construction and Development and Al-Asala won 128 seats in the first post-Mubarak parliamentary polls between November 2011 and January 2012 (112, 13 and 3 respectively) out of a total of 498 seats).

This made the Salafists the second-largest political force in parliament after the Muslim Brotherhood’s Freedom and Justice Party — now outlawed — which won 222 seats.

Al-Nour also won 45 seats in the Senate elections in January 2012, coming in second to the Freedom and Justice Party, which won 105 seats, out of a total of 270 seats.

“The Islamists saw their political heyday after the 2011 revolution because they were the most organized political force then,” Muneer Adeeb, a specialist in political Islam, told Al-Monitor. “The lack of strong secular parties and prevailing security and political conditions made the rise of the Islamists inevitable.”

The Salafists were allied with the Muslim Brotherhood all through the one year of Morsi’s rule.

Adeeb said, however, “This honeymoon ended because the Brotherhood wanted to exclude everybody else in its pursuit for fully dominating the political stage.”

This was why the Salafists welcomed the army-backed popular uprising against the Muslim Brotherhood and Morsi in 2013.

They even backed the post-Muslim Brotherhood authorities and President Abdel Fattah al-Sisi — who formally came to power in mid-2014 — apparently to evade the fate of the Muslim Brotherhood and to secure a continued presence on Egypt’s political stage.

Sisi, who has a hard line against political Islam in general and the Muslim Brotherhood in particular, also courted the Salafists in his bid to discredit Muslim Brotherhood propaganda about his hostility to the Islamic religion, analysts said.

In the 2015 House of Deputies elections, Al-Nour, the only functional Salafi party, won only 12 seats out of a total of 596.

“This result should have acted as an early warning for the Salafists,” Badreddine said.

The failure of Al-Nour to win any seats in the recent Senate elections appears to be yet one more indicator of the collapse of the Salafists’ popularity.

This does not augur well for the party, especially with the nation’s political parties preparing for the House of Deputies elections in October.

It also gives insights into the looming demise of political Islam as a whole in Egypt, especially with the ongoing crackdown by the authorities on the Muslim Brotherhood, analysts said.

“My belief is that political Islam is on the way out, given the changes happening in this country,” Badreddine said.

The Senate elections were the first for the body to be held in Egypt since 2012. The upper house of the Egyptian parliament was dissolved in November 2013 and then excluded from the 2014 constitution. However, it was reinstituted by a package of constitutional amendments in 2019.

Nonetheless, the Senate elections were untimely for the Salafists. They were held after months of suspension of services at the nation’s mosques, the main sphere of activity for the Salafists, because of the coronavirus.

The Salafists were also negatively affected by hostile propaganda from the Muslim Brotherhood, which is angry about their cooperation with Sisi.

Voter turnout in the Senate elections and the runoff was also very low, 14% and 10.25% respectively, according to the independent elections commission.

“This voter turnout, along with the practices of the other parties participating in the elections, reduced our chances of success,” said Salah Abdel Maaboud, a senior Al-Nour official who ran as an independent in the Senate elections in the Nile Delta province of Menoufia.

Abdel Maaboud and his colleagues said they have started preparing for the House of Deputies elections in October.

He told Al-Monitor that the party has prepared lists of its potential candidates amid hopes of making up for some of the losses in the Senate elections.

“We hope we can achieve positive results in the elections,” Abdel Maaboud said. “This is possible if we communicate better with voters.”