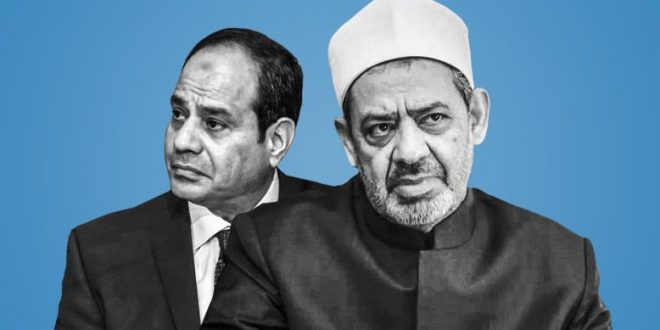 Sisi the so-called secularist sets his sights on Al-Azhar

One of the most notable differences between an authoritarian and totalitarian regime is that while the first seeks merely to nullify its enemies, the second seeks to nullify everything that functions autonomously of it – even if the thing in question poses very little immediate risk to the stability of the regime.

This is precisely how we must look at the recent move by Egyptian tyrant Abdel Fattah el-Sisi to, for the first time in over 1,000 years of essential autonomy from direct state rule, bring Al-Azhar under control of the regime.

As is the usual modus operandi of Egypt’s totalitarian counterrevolutionaries, Sisi’s loyalist-filled pseudo-parliament has passed a draft bill that will sever Dar al-Ifta, a body responsible for issuing religious edicts and advising the judiciary in Islamic matters, from Al-Azhar, which has been its patron since it first came into existence in the 19th century.

Al-Azhar is considered the most important seat of learning, scholarship and jurisprudence in the Sunni Islamic world.  The university and mosque were founded by the Ismaili Shia Fatimids in the 10th century, with the aim of educating people in the fields of not just Islamic law and theology, but in astronomy, philosophy, science, medicine and logic.

Dar al-Ifta was supposed to be the body that retained Al-Azhar’s organic link with Egyptian Muslims and the vehicle through which Egypt’s semi-clerical system could influence the secular state. It was in this spirit of autonomy from authority that Al-Azhar often served as an epicentre for progressive dissent. It was from Al-Azhar that great figures of resistance to imperialist and domestic tyranny, such as Ahmed Orabi, Saad Zaghloul and Mohamed Abduh, emerged.

Long gone are those days. The point is most certainly not that Al-Azhar today functions as some great site of resistance to Sisi, but rather that Sisi is ensuring that it never will again – that there never could be a modern Orabi or Abduh.

It’s unsurprising to anyone who understands that Sisi’s will is to control every aspect of Egyptian life, whether spiritual or material, that he wants to nullify Al-Azhar’s autonomy.

But what is truly unprecedented is that he’s taken this action so blatantly at a point in time when the idea of Al-Azhar producing significant voices of dissent against the regime is essentially nil. Since the days of Nasser, Al-Azhar’s autonomy has already been severely restricted by the filling of the upper ranks of the institution with loyalists to particular regimes – the Grand Imam of Al-Azhar (known informally as Sheikh Al-Azhar) can only be selected by the president.

To give a particularly apt example, Ahmed el-Tayeb, Sheikh Al-Azhar since 2010, was openly a member of Hosni Mubarak’s ruling National Democratic Party. His similarly politically predisposed predecessors had overseen the general decline of Al-Azhar, turning the famous institution into little more than a clerical buttress to Mubarak’s great looting of the country.

Tayeb has largely continued this with Sisi, with him supporting the military coup against Egypt’s first and only democratically elected president Mohamed Morsi that brought Sisi to power.

It’s with some irony that one of el-Tayeb’s justifications for supporting Morsi’s ouster was a variant of the absurd Akhwana (“Brotherhoodisation”) mythology, with him claiming that Morsi sought to undermine the autonomy of Al-Azhar and fill it full of Brotherhood members on the way to establishing an Iran-esque Islamic Republic.

Morsi actually welcomed democratising Al-Azhar, allowing its Council of Senior Scholars to elect the Grand Imam, as opposed to the president simply naming one. El-Tayeb’s real gripe was with the spread of democracy itself, given that democratisation would have eventually displaced the kleptocracy on which he has thrived.

Far from the fantasies of “Brotherhoodisation”, el-Tayeb is now confronted with the unstoppable reality of Sisi-fication. Under the new bill, the passing of which is now a formality, Al-Azhar will lose the right to select the Grand Mufti (the highest religious authority Egypt), with Sisi giving himself the power to not simply select the Mufti but determine how long they can serve.

The patronage of Dar al-Ifta will be removed from Al-Azhar and placed under the control of the regime. In other words, the concrete mechanisms through which Al-Azhar influences Islamic life and law in Egypt will no longer exist; instead, the Sisi regime will be able to carve for itself an entirely Sisified vision of Islam.

Al-Azhar will have to shape its religious rulings based on the policy of the Sisi regime. Ironically, given the fear of “Islamism”, this effectively turns Sisi into the highest religious authority in the country. That might be construed as hyperbole, but if Sisi controls Dar al-Ifta and can dismiss and appoint the Grand Mufti based on fealty, what other conclusion can be reached?

The power stripped from Al-Azhar, regardless of what you think about such power, has been absorbed by Sisi – and is yet another arena of control over Egyptians.

Sisi has effectively and unprecedentedly seized every institution of the state. His regime, as we’ve seen so brutally, has domain over the bodies and minds of Egyptians. It makes sense – if you consider his rule as a process of totalitarian transition – for him to try to monopolise the very souls of those he rules over.

The cliché is to liken Egyptian tyrants to the pharaohs of our ancient past. Well, given the pharaoh was not merely a king, but the “God-King”, sometimes the clichés are dismally apt.

Sisi makes this order with the necessary consent of the ruling forces of Egypt, particularly the ruling praetorian caste of the Supreme Council of the Armed Forces (SCAF).  After the turmoil of January 25, a moment when Egypt’s ruling kleptocracy was challenged like never before, the SCAF realised that they could not risk such exposure again.

All things being equal, Sisi is going nowhere anytime soon, but the day will come, either through old age or illness, when Sisi will no longer be the president of Egypt.

This is an event, as with the demise of Mubarak, that the regime fears greatly. And so, with relentless violence and the war against freedom of thought, speech and religion, Sisi is leaving his successor with the necessary armour to combat any dissent.

More immediately, Egypt already finds itself in precarious waters, waters that it has made all the more stormy with its domestic savagery and relentlessly myopic corruption.

The long-term damage caused by Ethiopia’s Grand Renaissance Dam is now a certainty, one that might have been better averted by the regime promoting domestic innovation, as opposed to brutality and fruitless intervention in Libya at the behest of the UAE.

Add into this mix the domestic, regional and global economic catastrophe caused by Covid-19 and one glimpses the necessity of totalitarianism from the perspective of the regime.

It’s not enough simply to murder democrats or lock away journalists and annihilate dissent – the endgame is a society where, come what may, Egyptians cannot even conceive of anything beyond the ideology of the regime that rules over every aspect of their lives.

Legislation
All
2020-07-30
asaeid
Previous Egypt is cracking down on women’s freedoms on and offline. But they are fighting back
Next Egypt seeks extradition of Sisi’s ‘pain in Spain’