Home / Normal / Are Sinai attacks linked to Egypt’s plan to intervene in Libya? 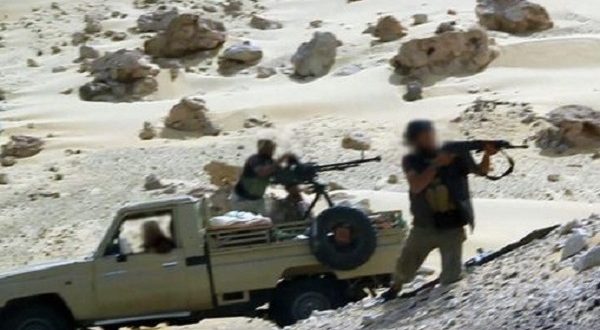 Are Sinai attacks linked to Egypt’s plan to intervene in Libya?

The Egyptian army said in an official statement July 21 that it managed to thwart a terrorist attack on a military security post in the city of Bir al-Abed in the northern Sinai Peninsula.

The statement continued that armed forces shot dead 18 militants, one of whom was wearing an explosive belt. The military also destroyed four vehicles, three of which were booby-trapped. Two army soldiers were killed and four others wounded in the incident.

The attack comes in tandem with the Egyptian parliament’s approval July 20 of the deployment of Egyptian armed forces on combat missions outside the country’s borders. The parliament’s vote comes against the backdrop of the events in neighboring Libya.

The situation in Libya is particularly critical especially since the Turkish navy had announced July 8 that it was preparing to conduct massive naval exercises in three locations off the coast of Libya. This prompted the Libyan Tobruk-based parliament, which is allied with eastern military commander Khalifa Hifter, on July 14 to call on Egypt to intervene in Libya to protect the national security of both countries, deeming what was happening as an immediate threat to Libya and Egypt.

Khaled Okasha, head of the Egyptian Center for Strategic Studies, an independent institution, told Al-Monitor via phone, “The link is very clear between the terrorist attack on Bir al-Abed [in Sinai] and Egypt’s announcement of its legitimate intervention in Libya to hold off the danger of extremist militias.”

“This terrorist operation is seen as a swift response by the armed militants in Sinai to the Egyptian decision in a bid to revive terrorist threats in eastern Egypt,” he added.

Okasha believes the terrorist elements in Sinai as well as in Libya — where Hifter is leading an assault against them — are funded and given orders by the same parties.

Sinai has been witnessing increased terrorist attacks against the security forces and army, since the latter ousted former Muslim Brotherhood President Mohammed Morsi on July 3, 2013, following massive demonstrations that swept the nation against his mismanagaement of the country.

Okasha explained that the recent terrorist attack was a foreseeable scenario for Egypt, which was able to thwart it.

“It is not the first terrorist operation the Egyptian military was able to foil. Pre-emptive strikes have taken place recently, which points to Egypt’s security control in Sinai,” he noted.

Okasha added, “The Egyptian army has the ability to address threats across the nation, whether in the east or the west [near the border with Libya], or on any other front if necessary. Anyone who doubts this, does not have sufficient knowledge of the Egyptian armed forces strength, be it their numbers or armament.”

“The Egyptian intervention in Libya is not a pointless venture. Eliminating terrorist militias in Libya contributes to destroying their counterparts in Sinai. All parties involved in the security issue in Egypt are well aware of the extent of association between the terrorist presence in Libya and in Egypt,” Okasha concluded.

On July 19, the Pentagon reported that Turkey sent approximately 3,800 Syrian mercenaries to Libya in the first quarter of this year.

Maj. Gen. Yahya al-Kadwani, a member of the parliamentary Defense Committee, told Al-Monitor via phone, “The attack in Bir al-Abed is seen as an attempt directed from [parties] abroad to confuse and hinder the Egyptian army from carrying its primary mission to confront any threat to Egyptian security in Libya.”

He said, “The armed militias operating in Libya, in Sinai and other locations in Arab countries work along the lines of the same mindset. The Egyptian army is widespread and therefore capable of carrying out several missions in more than one strategic direction. What is happening in Sinai is merely guerrilla wars that the army is very much capable of thwarting as it has done now and has been doing before.”

Kadwani added, “The countries that support terrorism, international intelligence services or the Muslim Brotherhood are pushing armed groups to commit such operations, in a desperate attempt to convey a picture to the public opinion at home and abroad that these militias can outperform the Egyptian armed forces. These are failed attempts.”

Maj. Gen. Fourad Allam, a member of the National Committee to Combat Extremism and Terrorism, told the Saudi daily Okaz July 23 that the terrorist attack in Sinai is a “failed attempt” to prove the presence of militants despite the Egyptian military operation against them. He said that there are plans to confuse Egypt’s security by mercenaries set to carry out terrorist crimes and target checkpoints.

“The attack on the security checkpoint is an attempt to dissuade Egypt from playing a historical role in securing its western borders and defending the security of Libya. This is especially true since the Egyptian parliament had approved the deployment of armed forces in a mission abroad. These groups are working according to international schemes aimed at harming Egypt’s interests and national security,” Allam concluded.