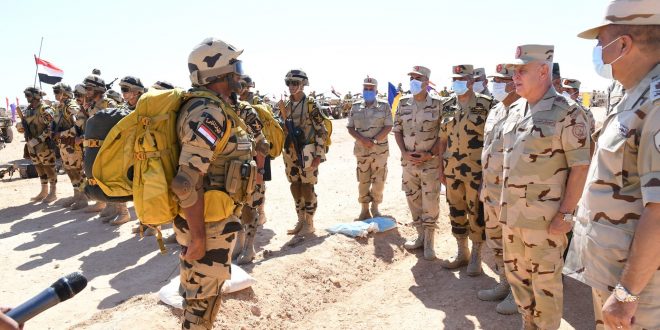 The Egyptian armed forces announced that the Egyptian army’s Chief of Staff Lieutenant-General Mohamed Farid witnessed the procedures for the alignment and combat readiness of soldiers on the western strategic direction near the Libyan borders.
According to the official page of the Egyptian Armed Forces, this comes within the framework of the general command plan to follow severe measures to protect the country’s borders and national security in all strategic directions by land, sea, and air in cooperation among all the main branches and tactical formations of the Armed Forces.
The Chief of Staff of the Armed Forces reviewed the measures adopted to raise the levels of combat readiness,the decisions of the leaders and coordination between all elements of the strategic process, including the ground forces and the main branches of the Armed Forces,to ensure that all the tasks are executed accurately and at the specified times.
Farid discussed with several commanders and officers ways to carry out the planned tasks and confront the sharp and rapid changes during the course of hostilities.
“The Chief of Staff of the Armed Forces inspectedthe line-up of elements to verify their readiness and ability to carry out all tasks and determine the level of technical competence of weapons and equipment,” the statement added.
Farid conveyed President Abdel Fatah el-Sisi and Defense Minister Mohamed Zaki’s appreciation for the sacrifices exerted by the army men to defend the homeland.
On June 20, President Sisi declared Sirte and Al Jufrah in central Libya a red line that if crossed, Egypt’s “direct intervention” becomes internationally legitimate.
That is because it is aligned with the UN Security Council resolutions on Libya and Berlin Conference imposing an arm embargo on Libyan factions, banning foreign intervention in the North African State, and advocating for a political solutions. Furthermore, Egypt’s intervention is requested by the elected Libyan House of Representatives and Libyan tribes.
In December 2019, Turkey signed with the Government of National Accord (Al-Sarraj’s government) – which is an interim non-elected government that is recognized by the United Nations – two MoUs on defense and gas drilling in the Mediterranean.
Libyan tribes announced the closure of oil ports and fields in January as the revenues were used by the Al-Sarraj’s government to pay militants. Early in July, the tribes declared that oil facilities would resume operations. However, the LNA announced on July 11 that such facilities would remain closed until the demands of the Libyan people on dismantling militias are fulfilled. The Libyan National Oil Corporation (NCO) announced that the value of revenues lost until present is $6.5 billion.
On July 5, several “unknown aircraft” launched nine strikes against Oqba Bin Nafea Airbase located in Al Watiyah controlled by the Al-Sarraj’s government and Turkey. The outcome was the destruction of Hawk air defense systems, and a Koral electronic warfare system as well as the killing of a Turkish commander, and six officers as the operations room they were in was hit.
However, the commander of mobilization stated on July 20 that Turkey still uses Oqba bin Nafea airbase in Al Watiyah western the country to bring in military reinforcements less than a month from losing air defense and electronic warfare systems in strikes by “unknown flights.”
On July 20, the Egyptian House of Representatives approved sending troops beyond Egyptian borders on the western strategic direction.
On July 16, President Abdel Fatah al-Sisi met with Tribe leaders belonging to eastern, central, and western Libya in Cairo as they demanded Egypt’s military support to repel Turkish aggression. “We will enter Libya upon the request of the Libyan people, and will leave it in compliance with the order of the Libyan people,” the president stated.
On July 13, the Libyan House of Representatives issued a statement allowing the Egyptian Armed Forces to intervene whenever it perceives a threat to the security of Egypt and Libya describing Turkey as “the invading occupier.”
The Libyan Armed Forces restored Sirte in January, and was advancing in the outskirts of Misrata and Tripoli. However, early in June, it lost Al Watiyah and Tarhouna, which was its last stronghold western the country, retreating into Sirte and Al Jufrah.
Security Forces
All
2020-07-27
asaeid
Previous Egypt jails female TikTok influencers for two years over ‘indecent’ videos
Next Polling For The Egypt Senate Starts Mid-August