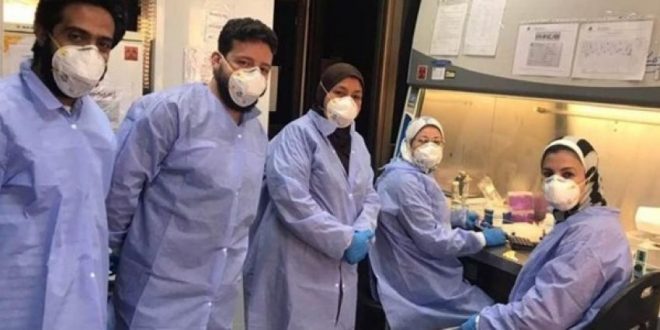 Egyptian healthcare workers find themselves in a precarious position, with many forced to choose between risking their lives in the fight against Covid-19 and being arrested for voicing safety concerns or criticising the government’s handling of the public health crisis.

Since the Covid-19 pandemic hit Egypt, a number of medical personnel have complained about unsafe working conditions, shortages of protective equipment, insufficient infection control training, limited testing of health staff, scarcity of hospital beds and the lack of access to essential healthcare.

They have also lamented the resulting deaths of frontline healthcare workers, which has led to a rare public confrontation between the Egyptian government and the country’s medical community over how the state is managing the crisis.

“Anger is growing among doctors and the Ministry of Health is required to protect them,” Mona Mina, former deputy head of Egypt’s Doctors’ Union, said in a public Facebook post in May. “You can’t put soldiers on the battlefield without weapons”.

So far, at least 117 doctors, 39 nurses and 32 pharmacists have died from Covid-19, and more than 3,000 are infected with the virus, according to statistics compiled by members of Egypt’s Doctors’ Syndicate.

Last month, Dr Ibrahim El-Zayat, a member of the syndicate board, told Egyptian daily El-Youm El-Sabe (Youm7) that the rate of coronavirus infections among medics was between 5 to 7 percent.

The medical union has repeatedly demanded that the government protect healthcare professionals, requesting the health ministry to provide them with protective gear, PCR tests, training and access to vital health care if they contract the virus.

Shortly after doctors and pharmacists started speaking out about their working conditions and the state’s response to the pandemic, the government began a campaign of intimidation against healthcare workers.

The London-based rights group reported how Egyptian authorities have arbitrarily arrested, interrogated, criminalised and prosecuted medical staff who speak out on charges of “spreading false news” and “terrorism”.

The organisation cited a source from the Doctors’ Union confirming that medics are being subjected to threats, interrogations by the National Security Agency (NSA), administrative questioning and penalties.

To make things worse, Prime Minister Mostafa Madbouly insinuated in a TV speech on 13 June that “negligence and mismanagement” of some medical staff members was endangering citizens’ health.

The controversial statement stirred anger among physicians who quickly responded by pointing out that they are trying their hardest to save patients while untrained, underpaid and under-staffed. Egypt’s Doctor’s Association issued a strong statement on the same day in response to the premier’s remarks demanding an apology.

Activists and medical professionals launched an online campaign using the hashtag #ادعم_اطباء_مصر (Support for Egypt’s doctors) and متضامن_مع_اطباء_مصر# (Solidarity with Egypt’s doctors) to request protection for doctors on the frontlines. As of 8 July, Egypt has officially recorded 77,279 coronavirus cases and 3,489 deaths, the highest death toll in the Arab world.

Some Egyptian officials and health experts say the number of cases is probably much higher than the official figures. In recent weeks, daily new infections have often exceeded 1,000 cases.

“Even before the first confirmed cases were reported, there were infections already. But the health minister and the government were underestimating the problem, until early numbers became publicly known,” Taher Mokhtar, an Egyptian doctor and human rights defender who’s currently in exile in France, told The New Arab.

Originally detained in January 2016 for his involvement in the campaign ‘Medical Neglect in Places of Detention is a Crime’, the doctor and activist fled the country shortly after serving his seven-month sentence fearing re-arrest.

He openly criticised the neglect in Egypt’s hospitals and health infrastructure, stressing that conditions have gone from “very bad” to “worse” with the start of the pandemic, which has led to complaints from frontline health professionals who in turn are being persecuted for views they share online about poor safety and inadequate health facilities.

Since the outbreak of the coronavirus in Egypt in mid-February, at least 10 doctors have been arrested, according to rights groups. Other health professionals have been warned they could be punished if they speak up.

On 18 June, Amnesty called on Egyptian authorities to stop their campaign of harassment and intimidation against health care personnel who are criticising the government’s handling of the pandemic.

“Instead of protecting frontline health care workers by addressing their legitimate concerns over their safety and livelihoods, the Egyptian authorities are handling the Covid-19 crisis with their usual repressive tactics. Health care workers have to make an impossible choice: risk their lives or face prison if they dare to speak out,” said Philip Luther, Amnesty International’s Research and Advocacy Director for the Middle East and North Africa, in a statement.

“It’s a small number of people put in prison but still, it’s shocking to think of medics getting arrested for expressing their opinions,” Michele Dunne, Middle East Program Director and Senior Fellow at the Carnegie Endowment for International Peace, told The New Arab.

The senior associate pointed out that the government is “determined” to control the narrative about how it is confronting the outbreak. “As usual, they [Egyptian authorities] are punishing anyone who goes against the official line,” she said.

On 28 June, Dr. Ahmed Safwat, an intensive care doctor in the Cairo suburb of Nasr City and member of the doctors’ syndicate, disappeared and has been incommunicado ever since, based on a report filed by his family to the syndicate. In his last Facebook post, he wrote: “The government says that everything is fine and under control, but you enter hospitals and find the opposite.”

A few days earlier, security forces arrested Mohamed El-Fawal, another board member and treasurer of Sharqiya’s union branch, after he demanded on Facebook that the prime minister apologise for his recent comments that appeared to blame doctors for a surge in coronavirus fatalities.

In a letter sent to Egypt’s public prosecutor, on 30 June, the Doctors’ Union called for Fawal’s release, adding that a doctor should not be penalised for his syndicate-related activities. The syndicate had previously urged the top prosecutor to release five physicians after they posted criticism on social media of the government’s Covid-19 response.

In another case, on 10 April, security officers detained an ophthalmologist, Hany Bakr, from his home north of Cairo, for a Facebook post in which he questioned why the government sent medical aid abroad when doctors at home were short of equipment.

On 28 March, 26-year-old doctor Alaa Shaaban Hamida was arrested at the hospital where she works in Alexandria after she allowed a nurse to use her phone to report a case of coronavirus to the health ministry’s hotline instead of first reporting the case to her managers. Three months pregnant, she is currently held in pre-trial detention on charges of “membership in a terrorist group”, “spreading false news”, and “misusing social media”.

In a conciliatory move aimed at trying to address the many issues affecting the medical community, prime minister Madbouly met with Hussein Khairy, chairperson of the Doctors’ Union, in late May. The meeting came after the association accused the government of negligence in its response to the pandemic following the case of Walid Yehia, a young doctor who died of coronavirus after struggling to get access to treatment at a crowded Cairo hospital.

Some local medics claim that since then, there have been certain improvements in hospitals and clinics. One member of the Doctors’ Association who chose to stay anonymous said working conditions are now “reasonable”.

“Compared to the beginning of the pandemic, we’re in a better shape. Personal protective devices and medical supplies are available in most hospitals, to my knowledge”, he stated. On the other hand, the syndicate member said they are worried about the death toll among hospital workers and in the country more generally, with Covid-19 deaths in Egypt substantially higher than that of other regional countries.

In an online event organised by the Carnegie Endowment for International Peace last month, Ayman Sabae, a health expert at the Egyptian Initiative for Personal Rights (EIPR), opined that the country has the capability and resources to curb the coronavirus but poor management is the problem.

“A lot of people don’t go to health facilities or go when they absolutely have to because they don’t trust the service providers, and face problems in accessing medical services,” Sabae said.

He explained that the relatively high mortality rate can be also attributed to the fact that many patients end up coming into hospital at a late stage, or even arrive at a terminal stage, whether they decided to go late or were unable to get the treatment they needed.

Despite Madbouly’s assurances to intervene and tackle complaints by the syndicate, medical and nursing staff are still working under difficult circumstances. Those who discuss the problem are subject to security threats and harassment, others pre-emptively remove their own social media posts for fear of government reprisal.

Amid such tensions, the medical board attempted to advance its fight for doctors’ rights by scheduling a press conference in late June to discuss the challenges health staff continue to face. The union’s official Facebook page later notified that “the presser was cancelled for technical reasons”. Several medics reported on social media that security forces had cordoned off the syndicate’s building in downtown Cairo, barring leading members from holding the conference.

Mokhtar maintained that the regime has a “well-known technique” to suppress public speech by running its propaganda via state-run media and clamping down on dissenting voices by means of a security crackdown.

The exiled doctor emphasised that the state response to the health crisis and its treatment of medics and nurses are “terrifying”. “I don’t really understand what they’re doing. We’re seeing cases going up by the day, the health infrastructure is very weak and they’re relaxing lockdown measures?”

“What’s more, the state is pressuring doctors and holding them responsible for the increase in deaths,” Mokhtar said. As Egypt has yet to reach the peak of infections for the coronavirus, the key challenge now is how the country will be able to reduce its death rate, particularly among health personnel, while making sure its healthcare system does not collapse.

“The Egyptian regime wants to look good internationally and in the eyes of Egyptians in how they’re dealing with Covid-19,” Dunne said. “They must realise they can’t afford to lose too many health workers if they want to fight this pandemic”.