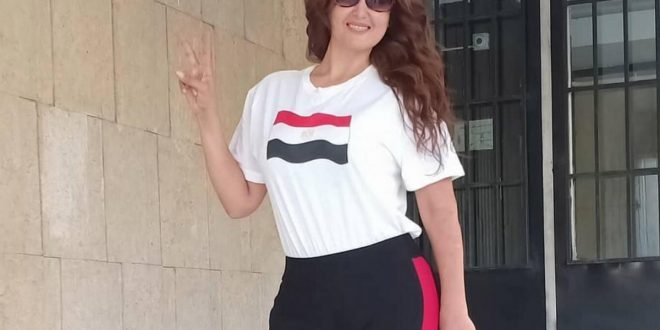 On Saturday, the famous Egyptian belly dancer and political satirist Sama El-Masry ws sentenced to three years in prison and a hefty fine. Her fate will come as little surprise to anyone who has observed the trajectory of the Sisi regime since it took power in a coup in 2013.

Sama’s “crime” is to have allegedly posted a video of her dancing on TikTok, with the prosecution describing the video as “sexually suggestive”.

The official charges against El-Masry were “inciting debauchery”, with Cairo’s Misdemeanours Court concluding that she had “violated family principles and values”, as well as “managing and using sites on social media with the aim of committing immorality”.

El-Masry claims her phone was stolen and the content was uploaded without her knowledge or approval, but she had also previously linked her initial arrest back in April to her ‘spat’ with a pro-regime media personality. It should be noted that El-Masry is by no means an opponent or direct critic of Sisi; indeed, in 2013 she was among a plethora of Egyptian celebrities to zealously support his presidency.

This in itself reveals the true dimensions of her arrest, and the real nature of the regime. Since 2013, Sisi has undertaken an unprecedented attack on the online activities of Egyptians. His regime understands all too well that the internet, and social media in particular played a significant role in the January 25 revolution. They are doing everything in their power to ensure that this cannot happen again.

Sama’s initial arrest was only made possible by a 2018 ‘cybercrime’ law that gives the regime uncontested authority to censor and surveil the online activities of any Egyptian. Any website that draws the ire of the regime can be censored and blocked under the tenuous and vague criteria of “threatening national security” and “the national economy” – any Egyptian who has merely visited such websites can be subject to fines, arrest and imprisonment.

Egypt is by far the worst country in the region when it comes to internet censorship. It has banned over 500 websites, the vast majority media outlets accused by the regime of “supporting terrorist organisations” and “spreading fake news”.

This general attack on Egyptian cyberspace has led to a crackdown on Egyptian social media users, bloggers and citizen journalists. High profile cases have included the satirist and vlogger Shadi Abu Zeid, who released a video mocking censorship in Egypt – for this, he was summarily arrested and imprisoned indefinitely on charges of “joining a terrorist group” and “spreading false news”.

The regime has the means to comb through social media of normal Egyptians, as was evident in the case of the US-Egyptian dual national, Reem Mohamed Desouky, who was arrested and imprisoned for criticising the Sisi regime on Facebook.

As ever in Egypt, repression is layered and largely intersects with a constellation of agendas. On the one hand, Sama’s arrest and imprisonment are part of the general attempt by the regime to squeeze the life out of Egyptian cyberspace, and on the other, is part of an agenda specifically targeting influential Egyptian women.

Sama’s arrest is part of the regime’s crusade against female social media personalities and TikTok influencers. Like her, these women have all been accused of spreading “immorality” in Egyptian society, with university student Haneen Hossam arrested in April under accusations of “promoting prostitution”. In reality, she had simply devised a model for young women to make money through working with her. The following month Mawada Eladhm was arrested for “violating family principles and values in Egyptian society” and “using social media with the aim of committing those crimes”.

Perhaps the most disturbing and cruel case was that of 17-year-old Menna Abdelaziz, who in May posted a video on TikTok where she gave a tearful account of her rape and beating at the hands of a male TikTok personality. For this, she was arrested on the command of the General Department for the Protection of Moral Values under the charge of “misusing social media networks, inciting debauchery and violating Egyptian family values”.

The persecution of Sama and other female TikTok personalities should be understood through the lens of patriarchal control – by being female, popular and influential beyond the scope of the regime, they are subverting the wall of political misogyny in Egypt that is now essentially unassailable.

There is some irony in the fact that a significant element of Sisi’s persona was his self-proclaimed role of secularist-in-chief against the exaggerated threat of Islamism. But in truth, women in Egypt are persecuted by the regime, not in the name of religiosity or secularism, but rather for the purposes of totalitarian patriarchal control.

It’s why the regime can simultaneously accuse the actress Rania Youssef of ‘debauchery’ for wearing a partially see-through dress to a film festival, while it can also support banning women from wearing the niqab in universities and workplaces. The motive is actually to ruthlessly police the manner in which Egyptian women dress, behave and think.

Though Sisi pledged to address the truly shocking epidemic of sexual assault against women in Egypt, his regime infamously arrested the actress Amal Fathy after she decided to publicly speak about her experiences of sexual harassment and the regime’s failure to prevent it.

Sisi might pose as the friend and protector of Egyptian women from Islamist bogeymen, but whenever a woman attempts to strive for genuine freedom and equality in Egypt, she is met with censorship and punishment.

For the regime, it’s up to them, and certainly not Egyptian women, to decide the quality and quantity of their ‘freedom’.

Liberty is the general enemy of the Sisi regime, but the liberation of women in Egypt is a particular fear that haunts the regime – almost half of those on the streets in January 25, facing down the brutality of the police and the serial rapists of the Baltagiya, were women.

Though tyranny in Egypt is stifling for most Egyptians, women face a particularly bleak future, with young women facing high unemployment rates and huge gaps in education and wages.

Following the institution of democracy in 2011, women’s right’s organisations went from strength-to-strength. It is of no surprise – as with all of the pillars of Egyptian liberty – that Sisi has sought to grind them to dust.

Misogyny in Egypt transcends any one regime or leader, but tyrannies almost always serve to preserve and expand systems of regression within societies. It’s why Egyptian society is perceivably moving backwards on almost every level under Sisi.

Though lip service has been paid by regime figures to addressing issues such as gender inequality, these arrests are an indication that the situation of women in Egypt is moving backwards too.

Women’s rights in Egypt have always been viciously contested, but Sisi, as with every other area of oppression in the Egypt he has shaped, is cementing this patriarchal backwardness with unprecedented and ruthless totalitarian vigour.