Home / Normal / ‘Fear is overcoming me’: Egypt cracks down harder on media amid pandemic 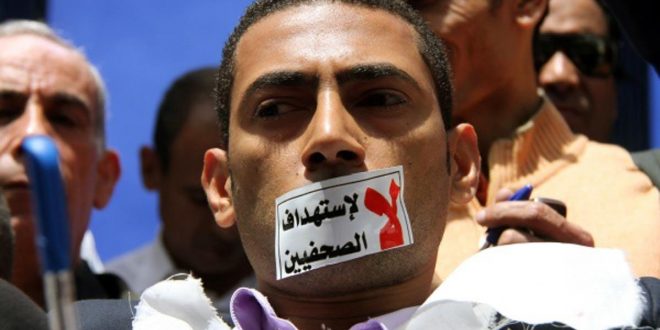 ‘Fear is overcoming me’: Egypt cracks down harder on media amid pandemic

When the editor-in-chief of Egypt’s most prominent investigative media outlet was arrested by security forces last month outside Cairo’s notorious Tora prison complex, Leena al-Deeb grabbed her phone to inform her best friend, a local journalist.

She saw that he had already texted her, writing: “Lina Atallah was arrested.”

“I WAS JUST GOING TO TELL YOU. God help us. What a time for journalism,” the 26-year-old television producer wrote back, echoing the angst-ridden sentiments shared by many reporters in Egypt who are forced to navigate a challenging and often dangerous media landscape.

Atallah, a prominent investigative journalist for Mada Masr, one of the few independent news websites in Egypt, paid a small fine and was released several hours after her detention following an outcry of international support.

Still, many other local, less-known journalists are not that lucky, and continue to languish behind bars without trial.

Egypt was already the third-worst jailer of journalists in the world, but since the coronavirus permeated its borders, the government has increasingly vied for even more control over the state narrative – accelerating its crackdown on journalists by arresting or deporting those who confront state figures.

‘Threat to the public’

Going forward, the council said, media outlets and social media users would be restricted from covering or discussing the coronavirus, Ethiopia’s Renaissance Dam and the conflicts in Libya and the Sinai Peninsula.

The council warned that only information issued by official authorities could be reported and legal measures would be taken against violators.

The Egyptian National Action Group (ENAG), a key opposition group, condemned the ban and said that no emergency declaration could justify the level of censorship.

“Such state-sponsored abuse against the freedom of expression must never be normalised,” ENAG said in a statement.

“This measure is not only morally wrong but also constitutes a real security threat to the public, as a consequence of the lack of information, lack of transparency and the regime’s impunity.”

The Arab Spring uprisings, now almost a decade ago, and Egypt’s uprising in particular, were filled with jubilance and high expectations of a transition to democracy

The logic followed that the governments replacing the fallen old guard would, in turn, increase the margins of media freedom for journalists and others who aimed to express their views, even those from opposition camps.

Instead, the opposite has unfolded, Dr Sahar Khamis, professor of communication at the University of Maryland and an expert on Arab and Muslim media, told Middle East Eye.

Tunisia is often singled out as an exception because of its reputation as the only safely transitioning democracy in the Arab world, “while many other countries, including Egypt, have witnessed detours or reverses on their road to democratisation”, Khamis said.

The Committee to Protect Journalists (CPJ), a New-York based watchdog, explains the stifling of media freedom in Egypt not as something that emerged from the coronavirus pandemic, but rather as a continuation of a longstanding trend, with the virus being used as an excuse to crack down in a more brazen fashion.

“From that point on, the government said it was forbidden to report anything that does not conform to their narrative.”

According to Amnesty International, journalism in Egypt has effectively become criminalised, with at least 37 journalists currently behind bars, 20 of them directly in connection with their work.

Arrested journalists have frequently been accused of belonging to a terrorist group‚ “generally referring to membership in the outlawed Muslim Brotherhood”, which Sisi removed from power by a military coup in 2013 and has since crushed with a heavy crackdown.

Mohamed Morsi, who was affiliated with the Brotherhood and was Egypt’s first democratically elected – yet divisive – president, collapsed and died in a courtroom during his trial on spying charges on 19 June last year.

Despite being a former head of state, coverage of Morsi’s death, which would normally make headline news domestically, was relegated to the inside pages of newspapers, in the section usually assigned for criminal affairs.

Egyptian TV stations presented the same 42-word scripted report on his death, neglecting to refer to him as a former president.

Afraid to speak out

Deeb, a business journalist, used to work with three now-blocked websites on a freelance basis – Middle East Eye, Mada Masr and Daily News Egypt – but left before they were blocked.

“It is shameful that they are blocked, but the state has even blocked Human Rights Watch here. There is no justification for this,” she told MEE.

“The only reason why I’m not afraid to talk to you is because I don’t cover politics, am not being chased and am considered a nobody.

“I guess I am not really scared and maybe that is because I am not staying in this country long.”

MEE reached out to a plethora of journalists, both foreign and local, on the ground in Egypt, all of whom emphasised the importance of the topic but were afraid to speak out because of concerns with regard to the authorities over the subject and MEE’s content.

Saif al-Islam Eid, a researcher at the Doha Institute for Graduate Studies, described the crackdown on journalism as something that initially targeted journalists “with Islamic tendencies, but then expanded to any journalists who challenged the state propaganda”.

The government is also trying to silence critics abroad by jailing their family members in Egypt.

Eid, a former political activist who was imprisoned for 13 months, is now in exile in Doha.

When security forces broke into his family home to arrest Eid’s father, they smashed everything inside and left disappointed after discovering his father was not present.

“My family is being threatened every day,” said Eid. “This is the black comedy reality for journalists and activists who oppose the government, even from outside.”

Since the coronavirus was detected in the country in mid-February, journalists, like many other professions, have faced salary cuts.

Deeb, for example, has seen her salary reduced by 25 percent.

Ahmad, a local editor who also freelances for international publications, spoke on the condition that he be identified by his first name only because he fears government reprisal.

“My boss wants to lower my salary, or to send him story ideas like the ones I publish for international media. I have financial difficulties and I’m putting all my effort into this job. But fear is also overcoming me because of the danger of the profession here,” he said.

“I’ve stopped publishing my English articles on Facebook and deleted all previous stories as a safety measure. God help us.”

Attallah had been interviewing Laila Soueif, the mother of jailed activist and blogger Alaa Abdel Fattah, when she was arrested on 17 May.

While Attallah was released, after her case gained global attention, Abdel Fattah has remained in jail.

Soueif told MEE: “Since 10 March, they cancelled visits to the prison totally because of Covid-19.”

Her son has “stopped his hunger strike, so his health appears to be fine. But he is, of course, not well. He’s isolated and now he can’t even read anything like a simple newspaper. I’m worried about his conditions.”

In another case, Shady Habash, a 24-year-old filmmaker who had been detained for two years without trial, died suddenly in his jail cell in May.

In an open letter sent to the Egyptian Ministry of Justice last month, PEN America and more than 60 partner organisations called on authorities to conduct a full and transparent investigation into Habash’s death.

His death sparked accusations of medical negligence in the prison, where Habash’s fellow inmates reportedly yelled from their cells for hours while Habash was dying, without avail.

A postmortem report by Egypt’s public prosecution said that Habash had mistakenly poisoned himself by drinking hand sanitiser.

The government’s latest crackdown on media freedom included 65-year-old journalist Mohamed Monir, who was arrested on 15 June on the usual charges of spreading false information and belonging to a terrorist organisation.

Monir had been interviewed recently by Al Jazeera television and had previously criticised the Egyptian government’s response to the coronavirus pandemic.

Monir’s arrest mirrors the experience of many other detained journalists in that plainclothes security forces barged into his home, transferred him to a police station and then charged him with spreading fake news, misuse of social media and participation in a terrorist group.

Meanwhile, the crackdown has not just targeted local journalists who contested the government’s coronavirus narrative, but also foreign correspondents.

On 18 March, Egypt expelled journalist Ruth Michaelson, a reporter for the UK newspaper The Guardian, over an article that indicated Egypt likely had more coronavirus infections than the country’s official report.

Michaelson cited a group of scientists from the University of Toronto who estimated the country had between 6,270 and 45,050 cases at a time when the country’s official total was just three cases.

Shortly after her story was published, an army of online trolls attacked the Guardian under the hashtag “lies of the Guardian”, and she was summoned, along with Declan Walsh of the New York Times, to the headquarters of Egypt’s State Information Service.

Thereafter, she received a note from the Egyptian Ministry of Foreign Affairs demanding that she leave the country.

“Egypt is not an anomaly,” Khamis, the media expert, told MEE.

“Unfortunately, this has been a pattern that has been escalating in the midst of the Covid-19 pandemic, and it seems to me that when there is a crisis of this global magnitude, the efforts by different regimes to control the official narrative, by making sure that only their narrative is heard, become much greater than in ordinary times.”

During her interview, Soueif, the mother of Alaa Abdel Fattah, said she had an important message to convey.

“The Egyptian authorities would never be able to crack down with this level of impunity if there wasn’t support from the countries that are so-called democracies, or that have democratic institutions, such as Europe or America,” she told MEE.

“There is silence with countries that say they care about human rights, and this is a major problem, unfortunately.”