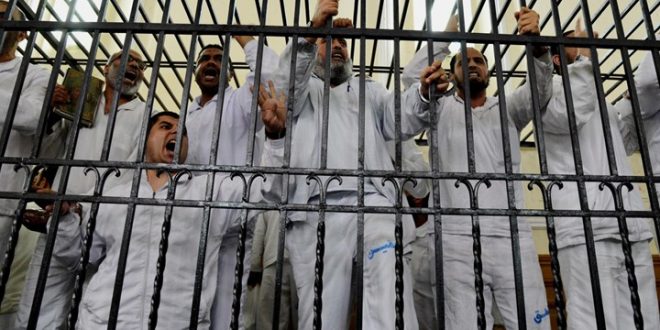 Amnesty International has lambasted a spate of mass rulings in Egypt to extend the pre-trial detention of over 1,600 prisoners, which it says violates basic due process guarantees.The decisions were made by “terrorism circuit” judges in Cairo’s Criminal court between 4 and 6 May, Amnesty said. It added that the defendants were not present during the hearings and their lawyers were prevented from presenting their defence.

The Egyptian authorities had postponed hearings and have banned communications between inmates and their lawyers and families since 9 March due to the coronavirus pandemic.

However instead of conducting remote hearings, the detention renewals were issued on paper alone.

The court has continually renewed the defendants’ pre-trial detention, some for over two years, pending investigations by the Supreme State Security Prosecution (SSSP).

Two years is the absolute legal limit of of pre-trial detention according to the Egyptian criminal procedures code.

Many of the detainees are prisoners of conscience who had been unfairly detained in the first place, the group said.

Amnesty called on the Egyptian authorities to immediately and unconditionally release all those detained for peacefully exercising their rights.

“The Egyptian authorities must immediately rescind the recent string of decisions to extend pre-trial detention and ensure that all those in this situation are able to challenge the legality of their detention and to communicate with their lawyers privately,” said Philip Luther, Amnesty International’s Research and Advocacy Director for the Middle East and North Africa.

“Many should not have been detained in the first place, as they only ended up behind bars for peaceful exercising their rights. Others have been held for years in proceedings marred by serious breaches of international fair trial standards,” he added in a statement.

Amnesty also accused the Egyptian courts of retroactively legalising arbitrary detention by issuing orders this week to cover the period between 16 March and 3 May when hearing were stopped due to the Covid-19 pandemic.

The pause in hearings meant that many defendants in SSSP cases whose pre-trial detention orders had expired had been held without a legal basis until this week.

The group also pointed out a number of detainees who had been held over the two-year limit. These include 25-year-old Moustafa Gamal whose pre-trial detention was extended on 6 May for 45 days, despite him being held since March 2018.

Gamal was arrested for obtaining a verification mark for the social media page of singer Ramy Essam, whose song “Balha” – which mocks President Abdel-Fattah al-Sisi – was released in 2015.

The music video’s producer, Shady Habash, died in prison on 2 May aged 24, after being held in pre-trial detention since March 2018.

Amnesty said the song does not contain incitement to hatred and the persecution of its creators is a violation of freedom of expression.

Also among those whose detention was extended are human rights activists Mohamed el-Baqer, lawyers and journalists Solafa Magdy and Hossam el-Sayed, and activist Alaa Abdel Fattah.

“All of them have been detained pending investigations into unfounded charges that relate to their peaceful work” said Amnesty.

Alaa Abdel Fattah began a hunger strike on 13th April, presumed in protest of his arbitrary detention in the overcrowded and unsanitary Tora prison, despite the threat of a catastrophic outbreak of coronavirus.

Amnesty says that the Egyptian authorities routinely use prolonged and indefinite pre-trial detention as a punitive measure against those perceived as political opponents, or human rights activists.

“These measures represent a disproportionate response to the COVID-19 pandemic and undermine the right to liberty and fair trial. We call on the Egyptian authorities to immediately and unconditionally release all those detained for peacefully expressing their opinions, defending human rights or participating in political life, and to ensure that all others held in pre-trial detention are able to challenge the legality of their detention or be released,” said Philip Luther.

“At a time where there are genuine concerns about the health and safety of prisoners amid the spread of COVID-19, the Egyptian authorities should be releasing those arbitrarily detained and consider releasing those at high risk detained in relation to minor non-violent offences. Instead the Egyptian authorities have chosen to add a façade of legality to what is clearly a case of mass summary detention decisions.”

DetentionJustice
All
2020-05-07
asaeid
Previous ‘Egypt has found a cure for covid-19’ — and other outlandish tales from Cairo’s propaganda machine
Next Egypt: How medical negligence killed a young video director in jail