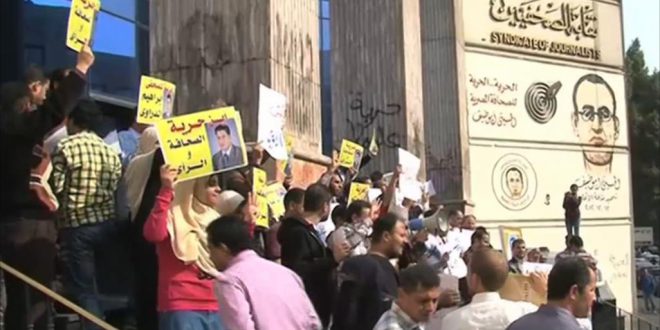 Egyptian journalists: ‘Blocking websites is an attempt to monopolise and silence media’

A number of Egyptian media professionals have rejected the recent media council’s decision to block websites and prosecute social media users, considering it contrary to the law and constitution that stipulates freedom of the press, the right to circulate information and freedom of expression in general.

The former secretary general of the Supreme Press Council, Qutb Al-Arabi commented on the media blackout by explaining that: These decisions come in the context of the blackout policy imposed by the system at the beginning of the epidemic. This comes in the context of preventing freedom of circulation of information, despite the constitution’s stipulation of that. Therefore, some websites have been blocked, but the problem is that it contradicts the official version, although there is correct information on a number of these websites, this matter was hidden and the authorities did not want to publish it, but it was forced to do so after one of the pages published it.

The media professionals stressed in exclusive statements to Mugtama that what is happening comes as part of the Egyptian regime’s policy, which is trying to monopolise and silence the media, preventing any attempts to act outside of the framework of official versions of the news, and to penalise all those outside this framework, whether by blocking websites, imprisoning people and informing the prosecution. The media professionals considered that this is against all the agreed international conventions on freedom of expression, despite the validity of the information published on these websites.

The Supreme Council for Media Regulation decided in a meeting on Thursday to block two news websites for six months, for reporting false news about the coronavirus. The council also decided to issue an alert to close six personal social media pages (on Facebook and Twitter) for their circulation of false news regarding the virus, according to the council’s statement.

The council also decided to take legal measures by referring the owners of a number of personal pages, which were used to circulate and promote rumours, to the Public Prosecution to take legal action.

The council called on social media users not to promote false news and cause alarm within the public.

The council stressed that the authorities concerned with dealing with the coronavirus are dealing in full transparency with the matter, and are announcing any up to date news related to the pandemic through the official websites of the Ministry of Health and the office of the World Health Organisation in Egypt, as well as conferences of the Council of Ministers.

Journalists and activists questioned the council’s statement, regarding their alleged transparency in dealing with the coronavirus. They also confirmed the validity of the information that was published by some of the blocked websites, citing the example of the news of the deaths of brigades of the Egyptian army as a result of infection with the coronavirus, which was later confirmed by the Egyptian authorities.

Amin called on the Syndicate of Journalists to intervene to protect the profession and journalists from this attack, as more transparency and freedom of expression is required to convey the truth regarding the situation, in order to benefit the health and safety of Egyptians.