Egypt confirmed on Wednesday 40 new coronavirus cases and one additional death, bringing its total number of cases to 442.

Twenty-one people have died from the virus in Egypt, as well as two senior military officers.

The total number of fully-recovered cases so far reached 93 on Wednesday, all of whom have been discharged from hospital.

On Tuesday, Prime Minister Mostafa Madbouly imposed a two-week nationwide curfew from seven pm until six am beginning on Wednesday and extended school closures an additional two weeks to fight the coronavirus spread.

Madbouly also announced that shops will be closed from five pm until six am during the week, while all stores will be subjected to a complete shutdown on Fridays and Saturdays.

All means of public and private transportation are suspended during curfew hours.

However, the closure decisions do not include bakeries, pharmacies, grocery stores or supermarkets outside shopping centers, Madbouly said, adding that restaurants will be limited to home delivery only.

Violators of the curfew face penalties ranging from a fine of LE 4,000 to imprisonment.

Cairo police and local authorities have also launched a crackdown on street vendors at the Ataba and al-Mosky markets, following orders from Cairo Governor Khaled Abdelaal to prevent overcrowding in outdoor marketplaces amid the virus outbreak.

Meanwhile, Museums and tourist sites across the country also closed down on March 23 and are currently being sanitized and employees at hotels in Giza and Cairo have been reduced by half.

The Central Bank of Egypt (CBE) moved on Tuesday to provide loans to tourist establishments with repayment terms of up to two years, as well as a six month grace period, in an effort to help pay for worker salaries and support the tourism sector.

Madbouly had issued a resolution on March 17 to reduce the number of employees in the public sector, instructing work from home whenever possible, while Egypt’s cabinet is currently mulling establishing a crisis management fund to support workers in the informal economy who have been impacted by coronavirus and harsh measures to control its spread.

Egypt’s Financial Regulatory Authority (FRA) has already donated LE 250 million toward government efforts to support the most economically vulnerable groups during the pandemic.

Also on Tuesday, Madbouly announced that airport closures, originally imposed between March 19 and March 31, would be extended until April 15. 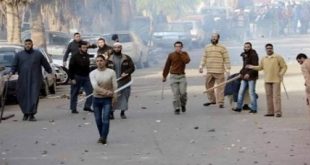 Court imprisons 7 defendants for torching a church in Giza

The Giza Criminal Court on Tuesday sentenced seven defendants to 15 years in prison each, …