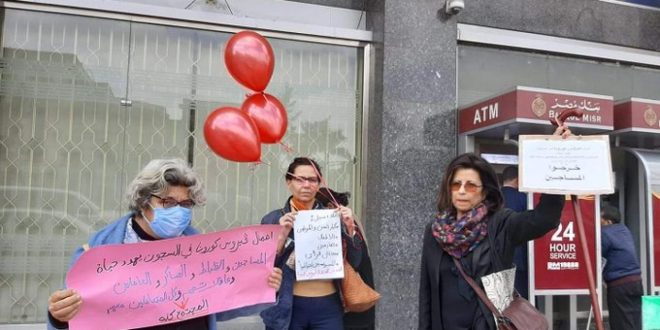 Egyptian authorities will release four women activists on bail after they were arrested Wednesday for staging a small-scale protest in the capital calling for the release of prisoners before the novel coronavirus spreads to detention facilities.

The women, including the prominent novelist Ahdaf Soueif, her sister Laila and niece Mona Seif, as well as academic Rabab Al-Mahdi, will be released on bail of 5,000 EGP each (£274), according to their lawyer Khaled Ali.

The bail was paid at 4 AM on Wednesday morning however by Wednesday afternoon the women remained in detention in Cairo’s Qasr al-Nil police station, according to independent news outlet Mada Masr.

Mona is the sister and Laila the mother of Alaa Abdel Fattah, a prominent blogger and activist, currently behind bars in Egypt.

The women were interrogated on charges of “inciting demonstrations”, “spreading fake news to disturb public order and spread fear” and “possession of publications containing fake news”.

In a Facebook Live broadcast, before police confiscated her phone, Mona Seif recorded herself saying: “We are in front of the cabinet building, asking for the state to take serious steps regarding coronavirus in prisons. As we know, at the best of times Egypt’s prisons are clusters for disease.”

Sanaa Seif, Mona Seif and Alaa Abdel Fattah’s sister, said in a Facebook post she had been prevented from seeing her family at a Cairo police station.

Mona Seif has raised awareness about conditions in Egyptian prisons and the dangers of contagion in recent weeks via social media.

“The only way to prevent detention centres becoming hubs for spreading the pandemic and endangering the entire population of the country is to release as many prisoners as possible,” she wrote.

In Iran, Bahrain and Jordan, thousands of prisoners have been pardoned or temporarily released over fears the virus could spread rapidly in detention facilities.

On Monday, Human Rights Watch called for Egyptian authorities to conditionally release “unfairly detained” prisoners, warning of a “disaster” during the coronavirus crisis.

Egypt has reported 210 COVID-19 cases and six deaths so far.

However, authorities have been heavy-handed with those who have dared to dispute the official figures.

Egypt’s security services revoked the authorisation of a Guardian correspondent in Cairo who cited a Canadian study suggesting the number of Egyptian cases was far higher than official reports suggest.

The agency also threatened the closure of the Guardian‘s Cairo office and demanded an apology from the publication.

DetentionJustice
All
2020-03-19
asaeid
Previous Coronavirus: Rights groups call on UN to urge Egypt to release prisoners
Next Egypt Requires Restaurants, Stores, Clubs to Shut Down by 7PM Each Day