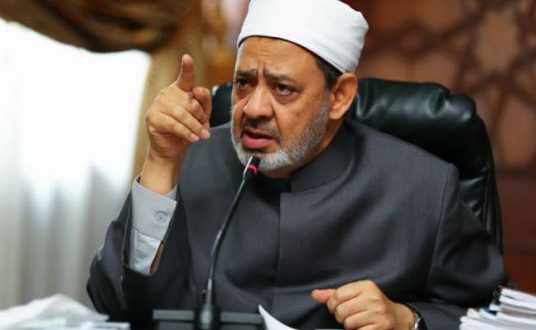 Is Al-Azhar Pushing the Envelope?

04/03/2020 Carnegie Endowment For International PeaceH. A. Hellyer Opinion and Analysis

“We buy weapons to kill each other, we buy death with our money,” Shaykh al-Azhar, Ahmad al-Tayyib, said, as he came to the end of his intervention during a very public conference in Cairo, entitled “Al-Azhar International Conference on the Rejuvenation of Islamic Thought”.

And then, presumably referencing the recent “Deal of the Century” announced by US President Donald Trump, he openly declared: “I was embarrassed while watching (US President Donald) Trump and (Israeli Prime Minister Benjamin) Netanyahu, who plan, say, and govern (the problems of the region), and there is no Arab or Muslim present”. At that point, though there had been much applause in the hall previously, following al-Tayyib’s comments, there was silence. And that, perhaps, says it all.

This intervention was unexpected – partly because of what was said – but also, who said it and this is why it gained some attention across the Arab media landscape. Ahmed al-Tayyib, the head of the Azhar establishment, which has a large symbolic value for Sunni Muslims worldwide, spoke rather bitingly about the current political moment for Arabs and Muslims. But his comments were relevant far beyond that: Arab political autonomy, particularly normative Muslim scholastic intellectual independence – vis-à-vis not only external challenges, but internal ones too. His intellectual comments, however, need to be contextualised against the establishment he represents – and where it finds itself in the current moment.

Since 2015, Egypt’s officialdom has been pushing a ‘renewal of religious discourse’ project, which has met with a rather divided reaction from within the religious establishment. Azhari scholars generally appear uninterested in a specifically religious initiative by a non-religious figure, as they typically regard such activities to be their domain, rather than from external actors. It’s hardly a secret that al-Tayyib and others in the Azhari establishment hold that view – indeed, it’s quite public in Egypt on that score.  Nevertheless, they’ve participated in the discourse – if only to continue to make their point that such activities should be rightfully placed under their aegis. And that’s what al-Tayyib reinforced.

Before we dissect that, it’s important to place the Azhar, Sunni Islam’s most pre-eminent educational institution worldwide, into its current context. It’s not without its challenges, as my colleague Nathan Brown and I explored in a recent Foreign Affairs article and Carnegie Endowment piece. Be that as it may, when Ahmad al-Tayyib, known as Shaykh al-Azhar, delves into public discussions, people listen.

Al-Tayyib sits at the head of the Azhar establishment – the historic mosque, the university, and its wide network of Azhar-affiliated schools in Egypt and internationally. Islam does not admit a hierarchical ecclesiastical structure like Catholicism, so it is misleading to describe al-Tayyib as ‘Islam’s Pope’ – but he remains deeply significant. As such, when institutions like the Vatican engage with the Muslim community, the corresponding institution is the Azhar – hence why it was with al-Tayyib that Pope Francis engaged with in signing the document on ‘Human Fraternity’ last year.

Many conferences are held by the Azhar establishment: on battling female genital mutilation; extremism and terrorism; interfaith dialogue, and so forth. In terms of widespread attention, they do not receive much. This recent conference, on the ‘renewal of religious discourse’, would probably have received the same – except it didn’t.

As mentioned, Al-Tayyib made a political intervention towards the end of his comment. It was preceded by poignantly pointing out that despite all the educational efforts that Azhar and other educational establishments in Egypt had pursued, they still couldn’t make locally produced car parts – indicating al-Tayyib’s sense of disappointment that Egypt is not more self-sufficient. His frank declaration that the ‘Arab and Muslim character’ is essentially absent today was a general critique of the state of the Arab world and Muslims worldwide – including, one presumes, its rulers.

But it was the defence of scholastic Sunni tradition – which one can read as a subtle indictment of the suggestion that tradition is somehow the source of problems facing Muslims – that made up the bulk of Shaykh al-Azhar’s comment. At the conference, the president of Cairo University made a number of claims vis-à-vis the ‘turath’ (tradition) of Sunni Islamic intellectual thought, particularly with regards to Ash’arism, which is the main scholastic theological perspective at the heart of Sunni Islam. A number of the religious scholars present expressed acrimony towards the claims, seeing as he made rather ahistorical assumptions, alongside a general broadside at what he saw as the tradition’s lack of renewal against the background of modernity. That fits very well into the overall ‘renewal of religious discourse’ narrative in Egypt at present.

In 2020, al-Azhar is still trying to chart a course that is not necessarily always in lock step with the powers that be

Unsurprisingly, at the end of the conference, al-Tayyib, as the pre-eminent representative of Azhar, took the opportunity to clarify the claims – which is to say he shut them down, rather forcefully. But al-Tayyib did more than elucidate Sunni Islam’s theological traditions in terms of their historical development – he seemed to take a swipe at the entire effort of ‘renewing religious discourse’ narrative. In so doing, it seems unavoidable to conclude he was critiquing not only the Cairo University professor, but the entire idea. As far as this trend in Azhari thinking goes, the ‘renewal’ notion – which is described in Islamic tradition as ‘tajdid’, is an internal process that is endemic to Islamic normative processes. But, and here is the big ‘but’ – only if it occurs from within. Indeed, al-Tayyib strongly criticised the idea that such a process could take place otherwise. In critiquing the claims, he said that such a process takes place from within the ‘house’, rather than in leaving the ‘house’.

In so doing, al-Tayyib repeated the standard line that renewal is a traditional (turathi) imperative – not one that was absent until imposed by modernity. Much of the rest of his comments were aimed at establishing that indigenous pedigree, and insisting that the tradition itself demands renewal – but using its tools and paradigms, rather than importing an external frame of reference.

In valorising the tradition’s own internal processes in this way, al-Tayyib was taking a clear stand vis-à-vis the overall idea of ‘religious renewal’ – not denying its importance, but placing it within the overall structure of normative tradition.

It’s unclear if al-Tayyib was seeking to establish a fresh position. After all, it was an intervention that was specifically provoked by the Cairo University professor’s own lecture, rather than an independently delivered speech of al-Tayyib’s own making. But it’s still interesting to see that in 2020, al-Azhar is still trying to chart a course that is not necessarily always in lock step with the powers that be. If for that reason alone – and there are certainly – the institution will continue to evoke interest.