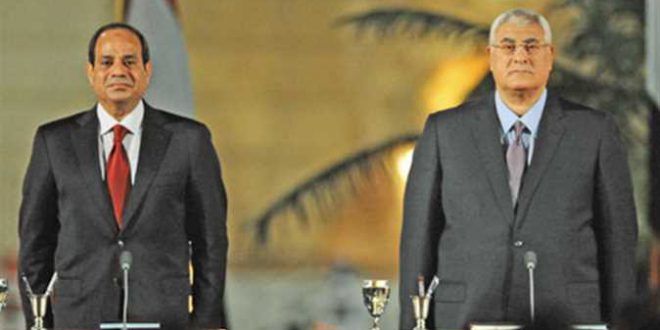 Egypt’s President Abdel Fattah Al-Sisi revealed that he had urged Adly Mansour, the former interim president, during his one year in office, to run 2014 presidential election, but the latter had refused.

“I urged him to run for presidency, while I keep my post [defence minister],” for the sake of Egypt. I did that for months, but he replied ‘impossible, this is enough’,” Al-Sisi said during his speech on Thursday on the occasion of the Prophet Mohamed’s Birthday (Al-Mawlid Al-Nabawi).

Mansour, who also served as president of the Supreme Constitutional Court, was the interim president from July 2013 to June 2014, following the overthrow of Islamist President Mohammed Morsi.

On the other hand, Al-Sisi said that extremism, terrorism, and defamation, as well as all attempts of moral and materialistic destruction, will never discourage the Egyptian people from moving towards a better future.

Al-Sisi added that Egyptians will counter evil with good, demolition with building, despair with work, and strife with unity and coherence.