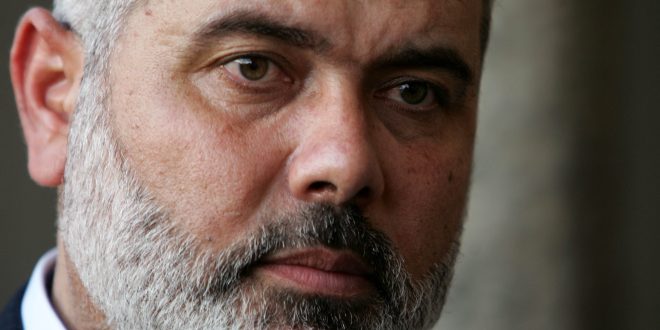 GAZA CITY, GAZA - JUNE 24: Dismissed prime minister of the Palestinian government, and Hamas leader Ismail Haniyeh looks on before he delivers a speech June 24, 2007 in Gaza city, Gaza Strip. Haniyeh delivered a speech to hundreds of Palestinian dignitaries vowing to resist in spite of the Gaza siege. (Photo by Abid Katib/Getty Images)

Cairo does not want Hamas leader to meet Egyptian opposition

A senior member of the Hamas Political Bureau said on Tuesday that Egypt’s government is blocking Ismail Haniyeh from leaving the Gaza Strip so that he cannot meet Egyptian opposition figures, Quds Net has reported. The Hamas leader should have been part of a delegation due to leave the besieged territory today for a regional tour.

According to Mousa Abu Marzook, though, Haniyeh will be stopped from travelling through the Rafah Border Crossing into Egypt. “The delegation is going to carry out a tour of the region,” explained Abu Marzook, who is the Hamas representative in Cairo.

“The tour has been planned for months,” he noted, “while the ban on Ismail Haniyeh travelling has been in place for about three years.”

On the issue of Palestinian elections, Abu Marzook said that these would not take place without voters in Jerusalem taking part. “However, if the Palestinian Authority, PLO and Fatah President Mahmoud Abbas is serious regarding the elections, he will make them happen and Palestinians living in Jerusalem can vote outside the occupied holy city.”

The veteran Hamas official pointed out that Abbas’s about-turn on holding elections came in response to a European threat that he should either go to the polls to renew his legitimacy or the EU would stop aid to PA institutions. “This is the main incentive for Abbas’s decision to go for elections,” added Abu Marzook.