Home / Normal / Was Hassm behind the car bomb attack outside the National Cancer Institute?

Was Hassm behind the car bomb attack outside the National Cancer Institute?

More than two days after a powerful car bomb explosion outside the National Cancer Institute in central Cairo, questions remain around who carried out the attack.

The blast, which killed 22 people and injured dozens more, was the deadliest attack in the Egyptian capital since the bombing of the Church of St. Peter and St. Paul in December 2016.

No group has claimed responsibility for the attack, but the Interior Ministry blamed the militant group Hassm. In a statement, the Interior Ministry said its preliminary investigation indicated that the militant group was planning on conducting a terrorist attack in another location using a car laden with explosives when it crashed into three other cars in front of the National Cancer Institute and blew up.

Security officials quoted in Al-Masry Al-Youm on Tuesday said that security forces are heading “to one of the most likely hideouts for Hassm members, especially after confirming that the group was responsible for the attack.” Yet there have been no police announcements of any arrests or militants killed, as is usually the case after a major attack.

Hassm denied any responsibility for the attack in a statement published online several hours after the Interior Ministry statement. The group expressed its condolences for the victims and stated that it focuses its attacks solely on the regime and not on “innocent civilians.”

The group has used car bomb attacks in the past and has been largely unsuccessful in hitting its intended targets.

With conflicting statements and scant evidence available, we can only speculate as to who was behind the attack.

The “Arms of Egypt Movement,” more commonly known by its Arabic acronym “Hassm,” is one of the militant offshoots of the Muslim Brotherhood that were formed after the ouster of former President Mohamed Morsi in July 2013. At the outset of their operations, these groups referred to themselves as “special committees” and they maintained semi-organizational ties with the Brotherhood.  However, the group began to operate independently of the core Brotherhood leadership, particularly after internal disputes within the Brotherhood escalated amid an intensive government crackdown.

Hassm first emerged in mid-July 2016 with the killing of Major Mahmoud Abdel Hamid, the head of the investigations unit of the Tamia district of Fayoum. A month later, in August 2016, the group claimed responsibility for the failed assassination attempt on former Grand Mufti Ali Gomaa near his home in 6th of October City.

Over time, Hassm became one of the most prominent militant groups that have origins in the Muslim Brotherhood.

According to a count by Mada Masr based on information released by the Interior Ministry, Hassm has conducted 22 operations in the past three years, including attacks by armed assailants, improvised explosive devices and car bombs. 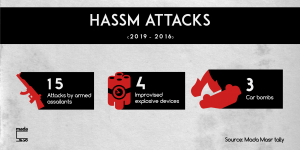 According to this tally, the group has conducted a total of three car bomb attacks. The first was in September 2016, during an assassination attempt on Assistant Prosecutor General Zakariya Abdel Aziz. The second was in November 2016, during an assassination attempt on judge Ahmed Abul-Fotouh. The third was in March 2018, in the targeting of the convoy of Major General Mustafa al-Nimr, the former head of the Alexandria Security Directorate.

Each car bomb attack failed to kill its intended target. If Hassm was indeed behind the car bomb attack in front of the National Cancer Institute, then it would mark the fourth failed operation of this type for the group.

The timing of Sunday’s attack raises suspicions of the involvement of Hassm or another armed offshoot of the Muslim Brotherhood. The incident came just days before the sixth anniversary of the massacres at Rabea and al-Nahda, when around a thousand people were killed, mostly members of the Muslim Brotherhood and its sympathizers. It also comes less than two months after Morsi’s sudden death in June during a court session.

Hassm issued a statement mourning the death of Morsi. The group said it considered the former president to have been “murdered” and vowed to avenge his death.

However, it is not clear whether Hassm has the capacity to carry out its threats, especially considering the fierce police crackdown on the group. Hassm has not been recently visible outside of repeated claims by the Interior Ministry of police raids targeting the group and killing alleged members. The Interior Ministry has provided little evidence that those killed are members of Hassm and there is no way to corroborate their claims.

According to Mada Masr’s count from news reports and Interior Ministry statements, 109 alleged members of the group were killed by security forces between December 2016 and May 2019. The largest of these raids occurred in May, when the Interior Ministry announced it had raided two apartments in greater Cairo and killed 12 alleged members of the group who had been in hiding there.

In addition to the police raids, a total of 773 defendants accused of Hassm membership are on trial in various cases: 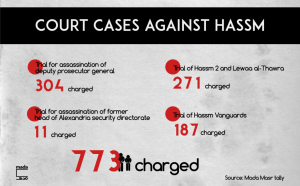 The security crackdown appears to have affected the group’s ability to operate. According to data gathered by Mada Masr, Hassm carried out just two attacks during 2018, a significant decrease from the twelve it carried out the previous year. 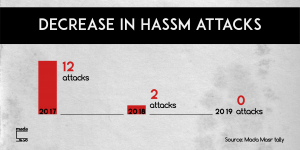 The group has not carried out any attacks so far this year. Nevertheless, Interior Ministry statements point to an increase in deadly police raids against the group’s members. Security forces killed 37 alleged members of the group in the first five months of this year alone, compared to 44 alleged members killed in all of 2018. 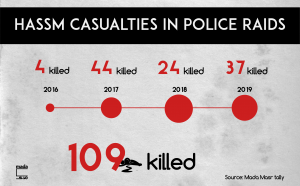 If Hassm did conduct Sunday’s car bomb attack, as the Interior Ministry claims, the large-scale attack would mark a revival for a group that had been dormant in recent months.

If Hassm was not behind the attack, the list of potential perpetrators can be narrowed down to two possibilities.

The first is the Province of Sinai, an Islamic State affiliate that is waging an insurgency in North Sinai, where it continues to target army and police installations and shows no signs of nearing defeat.

Initial forensic investigations and reports by the police and State Security Prosecution found that the vehicle was rigged with explosives in a manner that resembled the car bomb used in the targeting of the Italian Consulate in 2015, an attack the Province of Sinai claimed responsibility for.

The second potential perpetrator is Al-Mourabitoun, the militant group formerly led by notorious militant Hesham Ashmawy, a former Egyptian special operations officer who joined al-Qaeda after defecting from the Islamic State. Ashmawy has been accused of carrying out operations similar to Sunday’s car bombing, the most notable of which was the September 2013 assassination attempt against former Interior Minister Mohamed Ibrahim.

Ashmawy set up a base in Eastern Libya in 2014, from which he launched a number of operations across Egypt’s Western Desert until he was apprehended by Egypt’s main ally in Libya, the Libyan National Army (LNA), in October 2018. He was eventually handed over to Egyptian authorities this past May.

A Libyan military source told Mada Masr in June that there had been two bombings targeting the LNA  unit which had arrested Ashmawy last year. The source said the explosions came from IEDs that were strapped beneath two vehicles. It is possible that the bomb-laden vehicle that exploded in front of the National Cancer Institute on Sunday was an attempt to avenge Ashmawy’s extradition to Egypt.

The intended target of the car bomb also remains unclear. The vehicle exploded on Qasr al-Aini Street near Garden City, an area that is home to many government buildings and foreign embassies, including the American, British, and Italian embassies, the Parliament building, as well as a number of other government ministries and offices.

The prevailing opinion among security sources quoted in Al-Masry Al-Youm was that the intended target was one of the many “police or diplomatic buildings in Giza rather than in Garden City, which is difficult to penetrate. Or they were planning on parking [the vehicle] and detonating it when their intended target passed by.”