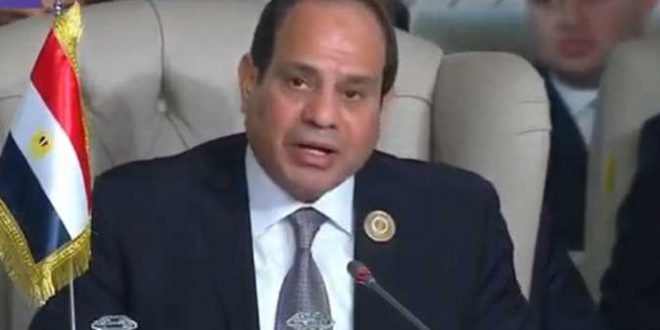 Establishing database for Egyptians is part of national security: Sisi

President Abdel Fatah al-Sisi asserted Wednesday his keenness to establish a full database for Egyptians; not only to fight corruption but also to help the citizens and make their lives easier, clarifying that all personal data are being dealt with as strictly classified.
Sisi’s speech came during a session on digitization on the second day of the seventh edition of the National Youth Conference, taking place at the New Administrative Capital.

“When we first started gathering information to get full and effective databases, citizens were vulnerable and protected, but we were keen to assure them that creating a full database of Egyptian society was a national security issue.” Sisi said.

“This issue is necessary in terms of combating corruption of interest to citizens,” he said, citing the exclusion of thousands of ration cards for repetition as an example.

The president also said the state has achieved great progress in digitization, saying “I have informed Akram Abdel Basset, the Administrative Control Authority undersecretary, that we are ready for funding because creating full databases for Egypt is highly important.”

“When the Ministry of Solidarity wants to offer financial aid to the neediest families, an application is submitted and with the absence of credible official databases, it takes time to check and verify the information submitted by each applicant,”Sisi asserted.

“With the new databases, no one needs to submit such requests anymore,” he added.”We get to know the financial and health conditions of the citizens through artificial intelligence,” the president clarified.

President Sisi said “through having complete databases decision-makers can get correct information that can help them detect and address any deficiencies and shortcomings, such as for instance a lower health growth rate in one village compared to its neighbors.”

“Previously, we used to make a full survey to get the correct information about any subject that we needed to address and that required a lot of time, effort and money,” he said. It was imperative to have a change, he added.

“Eventually and once we have databases that are complete, well-organized and precise, we can be able to follow up everything in Egypt.” Not just to fight corruption but also to help the people and make their lives easier, the president added.

“Through complete data, the citizens can locate their nearest school for their children, also if a citizen needs a health service in hospital, his data and medical history will appear to the persons in charge,” he added.

“By the end of next year, as promised by the Administrative Control Authority undersecretary Akram Abdel Basset and the Minister of Communication and Information Technology Amr Talaat, the system will be efficient hence we can reach out to the people and make decisions.” the president noted.

For his part, Abdel Basset said that digitizing the Egyptian state is a major step that will change the way of life in the country, adding that the multi phase project is implemented in cooperation between the young people and the state bodies.

According to a report issued by the ACA, the first phase of the digitization project started in 2018 in Port Said governorate and is set to be finalized soon.

Abdel Basset noted that the project aims at promoting direct communication with citizens through digital platforms and online applications. It also seeks to ensure the streamlining of services delivered for citizens.

Applying the digitization project in Port Said has helped provide the data needed for the implementation of the health insurance system in the governorate that will be ready to come into effect in September, he said.

Nearly 1,500 youth participants from all 27 governorates attended the conference. The participants represent different universities, political parties, the Presidential Leadership Program (PLP), along with outstanding youth in different fields, and youth who registered online.

The first conference of the “Dignified Life” initiative, aimed at the eradication of poverty, will take place before the closing session, “Ask the President”.

The sixth National youth Conference was held on July 28, 2018 in Cairo University, and was attended by up to 3,000 young people. The theme was human development and education reforms.