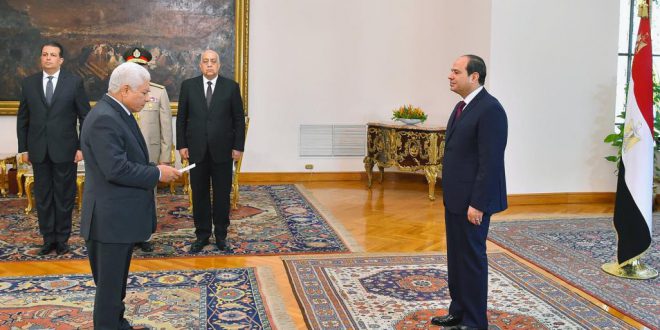 The heads of two top judicial bodies were sworn in by President Abdel Fattah al-Sisi on Saturday, the first in a series of anticipated appointments following the constitutional amendments passed in April that revised articles related to the judiciary and granted the president greater powers over the selection process.

The judge Abdallah Amin Asr was sworn in as head of the Court of Cassation — Egypt’s highest appeals court — and head of the Supreme Judicial Council, which oversees administrative affairs for the rest of the judiciary, replacing Magdy Abul Alaa, who reached the mandatory retirement age of 70 last month. Also on Saturday, Judge Essam Eddin Mohamed Fahmy al-Manshawy was sworn in as head of the Administrative Prosecution Authority, replacing Amany al-Rifai, who also turned 70 last month.

In accordance with the constitutional amendments, Parliament approved two laws in June that grant the president the power to select the heads of all five judicial bodies, as well as the military judiciary. The changes have come under heavy criticism as being part of a broader effort to undermine judicial independence and erode the separation of powers by giving the president greater control over the judiciary.

According to a source in the Ministry of Justice, Sisi is selecting the new judicial heads based solely on the results of background investigations of the candidates conducted by the security services, which includes both a look into potential criminal records, as well as political assessments meant to weed out candidates holding oppositional views.

The timing of the changes is noteworthy as the heads of all judicial entities, including the prosecutor general, are set to leave their posts by the start of the new judicial year in October — either because they have reached retirement age or because they completed their four-year term — allowing Sisi to handpick the entire incoming civil judicial leadership. The head of the military judiciary is not required to step down this year, as he has not exceeded the retirement range for generals in the Armed Forces, which is from 58 to 64.

The new laws allow the president to select the head of the Supreme Constitutional Court from among five candidates. Previously, the president’s role was limited to ratifying the appointment of the most senior judge.

The president also has the authority to select the heads of the Court of Cassation, State Council, the Administrative Prosecution Authority, and the State Lawsuits Authority. Each of those bodies nominates its seven most senior members for the position. The president then chooses one to head the body for a single four-year term.

The president will also appoint the public prosecutor from among three judges nominated by the Supreme Judicial Council, as well as the head of the military judiciary from among its seven most senior generals. Prior to the constitutional amendments the president’s role was limited to ratifying the Supreme Judicial Council’s choice for public prosecutor and the Ministry of Defense’s choice for the head of the military judiciary.

Meanwhile, the Supreme Constitutional Court has sent the list of its five most senior judges to the Ministry of Justice to send to the president, according to Judge Mohamed al-Shenawy, the former speaker for the court. According to Shenawy the list includes Mohamed Khairy, Saed Marei, Omar al-Sherif, Ragab Selim and Boules Fahmy. President Sisi is expected to choose a new head judge for the court before the end of Hassan Gabaly’s term in mid-July.

The list of candidates to head the State Council includes the judges Youssry al-Sheikh, Hassan Shalal, Yehia al-Khodary, Mohamed Hossam, Osama Moharram, Anwar Khaleel and Ahmed Abdel Tawab, according to a source at the State Council. The source — who is a deputy to the head judge of the State Council — said there was some debate over whether Moharram should be excluded from the list since he had been on leave in Kuwait for a long period. However, this move would have put the next most senior judge, Mostafa Hanafy, onto the list of candidates. Hanafy has been a legal advisor to Sisi since he took office in 2014, which was a cause for concern. The controversy was avoided when Moharram sent the council a notice of his decision to come back to Egypt in August to compete for the top position.

The source believes the president will select Mohamed Hossam, who currently heads the second district of the Supreme Administrative Court, to the top job at the State Council. Hossam is a likely candidate, the source says, because he received an invitation from the parlimentary speaker last April to attend the special community dialogue sessions on the constitutional amendments being held in Parliament. The move sparked controversy at the time because invitations were supposed to be restricted to the heads of judicial entities.