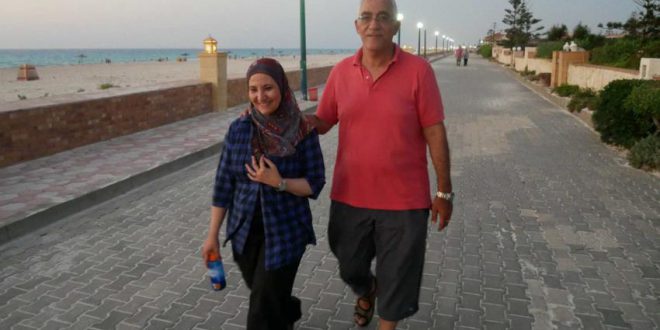 Egyptian authorities have levelled new charges against Ola al-Qaradawi, the daughter of famous Egyptian cleric Sheikh Yusuf al-Qaradawi, only one day after a court granted her release.

Qaradawi, 58, faced fresh charges on Thursday, accusing her of communicating with and facilitating support for a terrorist group while in prison.

During her imprisonment, Qaradawi was held in solitary confinement for two years, where she was subjected to inhumane conditions and abuse by prison staff.

“Prison guards would give her only five minutes every morning to use an outside toilet. This forced her to eat less food to avoid the need to go,” Qaradawi’s, Ahmed Abu al-Ala Magdi, told The New Arab.

Both Qaradawi and her husband Hosam were arrested in Egypt on 30 June 2017.

According to Egyptian law, those detained can only be held in pre-trial for up to two years.

Qaradawi’s fresh charges mean she could be held in pre-trial conditions for another two years.

The Egyptian regime had sentenced the Qatar-based cleric to life in prison in absentia and had been holding his daughter in solitary confinement for two years.

Sheikh Yusuf al-Qaradawi has accused Cairo of holding his daughter in revenge over a regional feud with Qatar.

His daughter’s re-arrest comes two years after the Gulf crisis began, when Saudi Arabia, the UAE, Bahrain and Egypt severed ties with Qatar, accused Doha of backing terrorism, and imposed punitive measures against the Gulf state.

Egyptian authorities have accused al-Qaradawi of perpetrating a range of crimes – including murder and theft – after Egypt’s 2013 military coup, prompting Interpol to issue a warrant for his arrest. This warrant has now been dropped.

The cleric – a vocal critic of Egyptian President Abdel-Fattah al-Sisi – has been considered the spiritual guide of the outlawed Muslim Brotherhood.

The Islamist movement has been heavily suppressed since the military coup against Egypt’s first freely-elected President Mohamed Morsi of the Muslim Brotherhood, who died in prison last month.

Egyptian authorities have killed and arrested thousands of the group’s members, supporters and suspected sympathisers since Morsi’s overthrow.