Home / Normal / Voting in the dark: Ramming the constitutional amendments through 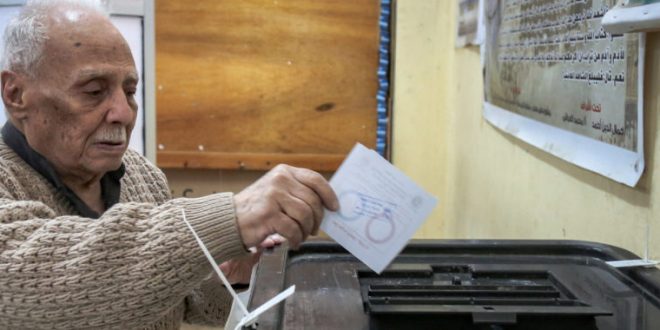 A man casts his ballot inside a polling station in the Shubra neighborhood of Cairo, Egypt. Egyptians will be voting on potential amendments to the constitutional including extending presidential limits and widening authority to the military establishment. April 20, 2019

Voting in the dark: Ramming the constitutional amendments through

The National Elections Authority (NEA) announced on Tuesday that the referendum on a set of major constitutional amendments, which allow President Abdel Fattah al-Sisi to remain in office until 2030, passed by 88.8 percent with a 44.3 percent turnout.

The extensive amendments include articles related to the powers of the executive, the judiciary, the Armed Forces, reintroducing a second legislative chamber, and more. Yet the actual text was not available to voters at polling stations in Egypt or abroad. The ballots presented voters with one choice: to accept or reject all the amendments. And the NEA made no attempt to inform voters about what the amendments mean.

According to several judges who spoke to Mada Masr on condition of anonymity, not including the text of the articles on the ballot violated both the law and the Constitution.

The dearth of information was compounded by the sheer speed of the electoral process. Parliament approved the amendments in a single session in mid April and sent the finalized draft to the president the same day. The next day the amendments were sent to the NEA, which announced that the referendum would begin two days later for Egyptians living abroad, and three days later inside Egypt. This left little time for voters to fully understand or discuss the final version.

Debate between supporters and opponents of the changes rarely delved into the specifics. The prevailing sense was that the vote was essentially a referendum on Sisi. “What difference does it make what [voters] know or don’t know?” says one parliamentary source. “Whoever is with the president will support it and whoever is against him will reject it.”

The obscure nature of the amendments and lack of easy access to information on their specifics was not solely an achievement of the NEA. Ever since Parliament announced it had received a proposal to amend the Constitution on February 2, a climate of silence has prevailed. Other than Abdel Hady al-Qasaby, head of the Alliance to Support Egypt, a pro-state parliamentary bloc, the identities of the 156 MPs who introduced the changes to Parliament remain unknown.

At the time, both print and satellite media outlets, citing Alliance members, announced that the proposal included reinstating the Media Ministry, and abolishing the Supreme Media Regulatory Council, National Press Authority and National Broadcasting Authority. The proposal officially put forward by the parliamentary speaker on February 5 did not include these amendments, however. The final draft was only completed by the Legislative Committee on April 14, and many MPs were surprised when new edits were made during final parliamentary voting session last week.

A senior member of the Supreme Constitutional Court tells Mada Masr that the push to amend the Constitution as quickly as possible turned the process into a “circus whereby whoever loves the president should support [the amendments].” This disregarded the substance of the sweeping changes, which expanded the president’s powers at the expense of other pillars of state.

MP Mohamed Fouad echoes this view, tying the phenomenon to what he says was a predetermined outcome. Fouad says that many MPs rushed to support the amendments without knowledge of their contents. To illustrate, he points out that Alliance to Support Egypt MPs continued to hold conferences in Cairo and other governorates to muster support for Sisi to stay in power until 2034, even though the final draft only allows him to extend his rule until 2030.

The Supreme Constitutional Court member says that “ramming through” the amendments — giving citizens just two or three days to consider the final draft before the vote — was a deliberate move to make sure there was not enough time to understand and debate the articles.

He says the NEA should have taken all measures to clearly present the amendments to citizens, such as providing a full copy of the text at each voting station, to ensure that those casting ballots were informed.

A member of the NEA disagrees. He tells Mada Masr that the NEA’s official decree calling for the referendum had a copy of the final text attached to it and was published by the Official Gazette and distributed on other media outlets. This was enough to inform the public, he says.

The NEA source, who asked to remain anonymous, says it is each voter’s responsibility to read through the amendments and make an informed choice before going to the polls. “If every citizen read all 21 amendments at the polls and compared them to the current articles before casting a vote, we would need more than 15 days to finish the referendum,” he says.

However, a senior member of the State Council tells Mada Masr that the NEA clearly violated the Constitution by not including the full text of amendments on the ballot, as well as making the choice a sweeping yes or no on all the amendments, as opposed to being able to vote on each article separately.

According to the State Council member, Article 157 of the Constitution lays out the rules for popular referendums on matters related to “supreme interests” of the nation. If a referendum includes more than one issue, each topic must be voted on separately. For constitutional amendments, it would also be permissible for the NEA, to make things easier, to organize voting on amendments grouped by governmental branch: Voting could be split into sections related to executive authority, judicial authority, legislative authority and so on.

The NEA source disagrees with this interpretation of Article 157. The Constitution lists five triggers for a popular referendum: the dissolution of Parliament by the president; peace treaties or alliances; matters related to the nation’s supreme interests; no-confidence motions brought against the president by the House of Representatives; and a proposal to amend one or more articles of the Constitution.

According to the NEA source, the only case in which the Constitution requires voters to decide on articles separately is when the president calls for a referendum on matters related to the nation’s supreme interests. For example, he says, if the president decides to unify with Libya and Sudan — making it one republic with a single president and unified army — three separate questions would be required on the ballot: on general unification, unification of the presidency, and unification of the military. The other four cases, do not require multiple questions.

The State Council member, who presides over a chamber of the Supreme Administrative Court, counters that the general rule outlined in Article 157 in fact extends to constitutional amendments, so voters must vote on each amendment separately. He also voices surprise at the NEA member’s comment about the impracticability of allowing voters to read through the amendments at the polls because of the time it would take, especially as the amendments are so pivotal and will be in force for a long time.

In his opinion, the NEA’s decision to rush the process was facilitated by a compliant judiciary. On April 18, the day after the NEA called for the referendum, the first chamber of the Supreme Administrative Court received several appeals against the vote, including ones challenging its structure as a sweeping “yes” or “no” choice as opposed to a vote on each article. Two days later, the court said it would not hear any of the appeals, arguing that the NEA’s call for a referendum was an executive action, related to a constitutional requirement to let the people decide because they alone are the sovereign source of authority, and thus have the final say in approving or rejecting amendments.

The State Council member, however, says the National Elections Authority Law clearly states that the NEA’s decisions regarding referendums and presidential and parliamentary elections are administrative decisions subject to oversight by the Supreme Administrative Court.

Electoral ProcessLegislation
All
2019-04-24
asaeid
Previous Probation: The (illegal) half-life created by nights inside a police station
Next Authoritarian Math