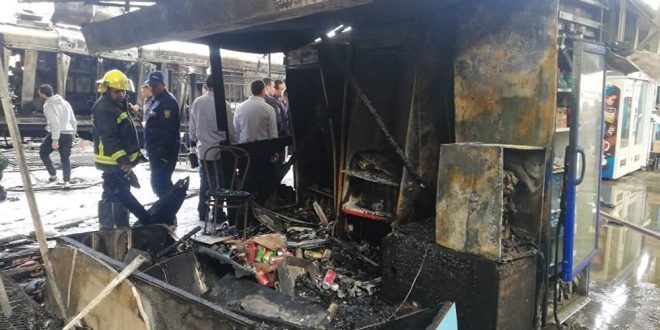 At least 25 people have been killed and some 50 others injured after a fire erupted at Cairo’s main train station, Egyptian medical officials confirmed earlier this morning.

The National Railway Authority said the blaze was triggered by a high speed train colliding with a concrete buffer stop at Ramses Station in downtown Cairo. The train’s fuel tank reportedly exploded after the crash, setting a platform and nearby buildings on fire.

Eyewitness and local media pictures showed horrifying scenes of charred bodies lying on the tracks and the platform, as dozens of ambulances and fire engines rushed to the scene.

“I was standing on the platform and I saw the train speed into the barrier,” witness Mina Ghaly told Reuters. “Everyone started running but a lot of people died after the locomotive exploded.”

All rail services at the station have been suspended, with the death toll expected to rise. CCTV footage of the crash has also been shared on social media, showing the moment the train slammed into the platform, and the subsequent explosion.

Egyptian Prime Minister Mostafa Madbouly said an investigation would be opened and that those responsible for the accident would be held accountable.

“We will immediately work on alleviating the suffering of the victims, but more importantly we will identify those who are responsible and punish them,” he told reporters from the scene of the blaze.

The crash comes almost exactly a year after a collision between two trains in the northern province of Beheira left 15 people dead and a further 16 injured.

Fatal train crashes and accidents have been frequent occurrence in Egypt for the past two decades. Observers attribute such crashes to old equipment, poor maintenance and inefficient government regulation.

In 2017, Egypt’s general prosecutor referred six persons to trial for “extreme negligence” after 44 people were killed and at least 200 were injured in a crash in the province of Alexandria. The country’s deadliest rail accident occurred near Cairo in 2002, when a fire ripped through an overcrowded passenger train, killing more than 370 people.