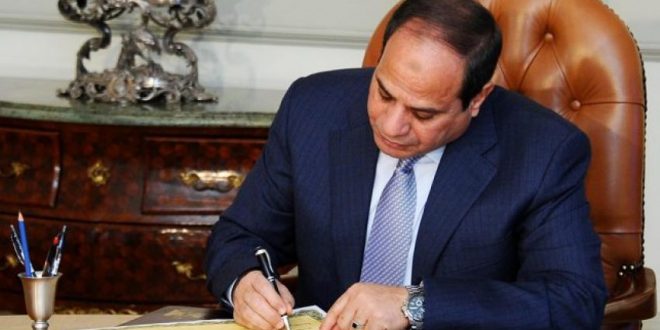 Egypt’s current constitution was born to be amended, as some of its architects made clear when they wrote it five years ago. One of its most significant features, a limitation on presidential terms that appeared to be deeply entrenched, was quite obviously in the cross-hairs as soon as Abdel-Fattah al-Sisi, the minister of defense when the document was promulgated, became president.

With Sisi’s rise, the only questions became when the constitution would be amended, how, and what else would be thrown into the mix. Egyptian regimes have had a habit of bundling all sorts of amendments into a single package and then presenting them to voters for them to say “yes” (though a “no” option is technically on the ballot). Even the 2014 constitution itself was actually presented as a systematic amendment of the 2012 constitution.

The fine print of the 2019 amendments has not yet been finalized, though current drafts make detailed and informative analysis quite possible. What is at stake appears to be much more than further disappointment to those who had hoped for revolutionary change in 2011. It will also be a significant step toward repudiation of an earlier revolution—the “Corrective Revolution” of 1971.

May 15, the date when the Corrective Revolution took place, was long a public holiday in Egypt, finally abandoned when the 1971 “revolution” itself was forgotten. But that event actually marked a significant overhaul in the way Egypt was governed, constituting not a transition from dictatorship to democracy but a reconfiguration of Egyptian authoritarianism. Another such reconfiguration is now underway, and repudiates some of the changes of 1971.

The system built after the overthrow of the monarchy in 1952 evolved into one allowing for little independent political activity. It was characterized by a strong presidency, held by Gamal Abdel Nasser until 1970, and dominant military and security services. The regime controlled most parts of the state apparatus and used a single political party, the Arab Socialist Union, and an ideology, Arab socialism, as tools to dominate and steer the Egyptian state and society.

In 1971, however, social and political discontent and more portentous challenges, namely rivalries among key institutions and power figures, led to a gradual but systematic reconfiguration of the regime and state as a whole. On May 15, rivals to then-president Anwar al-Sadat were dismissed. Over the next 15 years steps were taken (beginning with a new constitution later in 1971) to dismantle the Arab Socialist Union, turn away from Arabism and socialism, circumscribe the political role of security and military institutions, which nevertheless remained powerful, and build a “state of institutions.”

In the system that emerged, various parts of Egypt’s wide state achieved considerable autonomy. They generally were kept under the watchful eye of a presidential loyalist, to be sure, but also given significant latitude in internal affairs and even allowed to press for specific kinds of concessions—such as higher salaries, job guarantees, or control over internal allocations and budgets. Coupled with limited political liberalization—uneven, constantly shifting, and often reversed—the four decades after Egypt’s Corrective Revolution saw a distinctive brand of authoritarian state emerge.

That Egyptian state is now being reconstructed and recentralized, and the 2019 constitutional amendments are clearly a part of that effort. The effect on some institutions is clear in general terms, even if the details have not been finalized. The judiciary, for instance, is to be brought under more direct executive oversight. The measures to achieve this include remarkable steps that seem closely based on moves undertaken by Nasser in 1969 and reversed under Sadat and Hosni Mubarak after 1971. These include invigoration of an executive-led oversight body for judicial institutions and an end to the autonomy of the Supreme Constitutional Court.

The return of the military to overall dominance of the political order and the prominent role of the security services are now quite clear in Egyptian political life. The constitution of 2014 essentially placed them outside the constitutional order; the amendments of 2019 may place them above it.

But a full restoration of the pre-1971 order is not in the cards. The Sisi regime has not built a political party and it seems to eschew any ideology other than the valorization of the state itself. Nor does it seek to mobilize the population. The 2019 amendments are not being written amid regime-organized huzzahs but instead in an eerie silence when it comes to public discussions.

The regime taking shape is not distinctive in being authoritarian but in how it intends to be authoritarian. It is presidential, security-minded, dominated by security and military officers, anti-political, centralized, and anti-ideological.

In the short term, this system is successfully entrenching itself. In the longer term, the question of whether its solidity is characterized by an underlying brittleness is difficult to answer. That depends partly on whether pockets of autonomy in the state—such as Al-Azhar—can preserve themselves, or whether, for instance, the judiciary’s corporate identity can successfully hibernate, as in the 1970s. But it depends even more on whether Egypt’s political quiescence, supported by the demobilization of its society, can be sustained.

LegislationPolitical Transition
All
2019-02-27
asaeid
Previous Outcry against 5-year sentence handed to Khaled Lotfy, publisher of Arabic translation of Israeli-authored book
Next Cairo keeps itself front and center in Syria negotiations