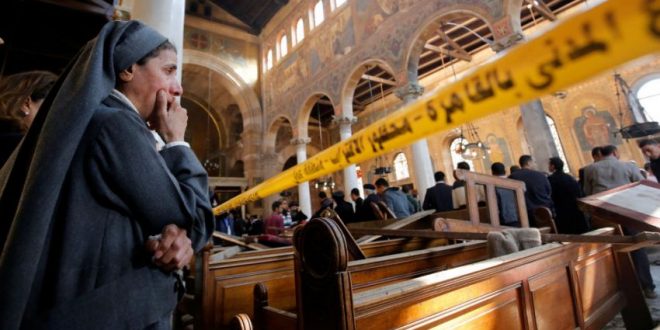 Places of worship for Egyptian Copts closed after protests

More disturbing episodes of intimidation against Coptic Christians took place this month in the village of Manshiyet Zaafarana in Minya governorate, 240 kilometers (150 miles) south of Cairo.

On Jan. 11, Muslim hard-line residents of the village encircled a building used as the Copts’ place of worship, claiming Christians were seeking to turn it into a church without a permit. Subsequently, the place of worship was closed.

A Jan. 11 statement from the Egyptian Orthodox Archdiocese of Minya and Abu Qirqas said the archdiocese owns a small building where prayers are held for the nearly 1,000 Coptic Christian residents in Manshiyet Zaafarana.

It added that following the Mass celebrating Christmas on Jan. 7, a number of “hard-liners” entered the building. Police then drove the “hard-liners” out while two priests and some Christians remained inside. The statement also said that on Jan. 11, more than 1,000 “hard-liners” protested outside the building against the Coptic church and Christians. Abusive slogans were chanted, and the protesters demanded that security forces there shut down the place. The forces asked the protesters to calm down and promised to meet their demand; the place was subsequently closed.

The statement also accused security forces of favoring the extremists and shutting down multiple churches to placate them.

Ishak Ibrahim, a journalist and researcher in charge of the freedom of belief and religion dossier at the Egyptian Initiative for Personal Rights, told the Madamasr news organization Jan. 13, “Contacts with the archdiocese showed that the Copts in the village have been praying in this place of worship for almost a year on an irregular basis.”

In October 2017, the archdiocese released a statement listing the churches closed that month. They included the Holy Virgin and Mar-Girgis Church in the village of Sheikh Alaa’ in Minya, which was closed Oct. 15 of that year, the Anba Mousa Church in al-Qushairy village and Abou Seifain Church in Karam village, both in Abu Qirqas, which were shut down Oct. 22. St. George Church in Ezbet Zakaria, Minya, was closed Oct. 27.

Research shows that at least 17 episodes of sectarian violence have taken place in Minya governorate since June 30, 2013. This number does not include the Aug. 14-15, 2013, attacks that occurred in retaliation for the dispersal of the Rabia al-Adawiya sit-in, nor the incidents targeting the visitors of the Monastery of St. Samuel the Confessor in May 2017 and November 2018, as these are considered terrorist attacks carried out by nonresidents of Minya governorate.

“Minya has its own particularity,” said Kamal Zakher, a Coptic intellectual. He told Al-Monitor that in Egypt, “The highest Christian population density, after Asyut, lives in Minya governorate, which also houses the various radical Islamic organizations that spread in Egypt in the early 1970s.”

He said, “This is added to the high rates of poverty and wealth there. Minya suffers from a development crisis given the unexploited large desert hinterland. Also, its geography helps in bringing in terrorism given the multiple narrow roads leading to Libya, large parts of which are held by extremists.”

Bishop Makarios of Minya confirmed Zakher’s remarks on the high density of Christians in Minya. He told the media in 2017 that there are 2 million Copts out of a total population of nearly 5.6 million people in Minya.

For Zakher, conflict among the various Christian denominations in Minya is not the reason behind the higher rate of sectarian-related acts of violence. He said such conflict is marginal, although some try to use the situation to their advantage. For example, the Evangelical Church issued a statement following the crisis in Manshiyet Zaafarana saying it has the only church in the village.

Zakher said the situation in Minya is a reflection of the conflict between the official state and the deep state in which sectarianism prevails.

Zakher indicated that there is a revenge-minded conflict between the Copts and extremist groups, especially the Muslim Brotherhood, particularly since the latter has said Copts were heavily involved in the June 30, 2013, protests outside the Ittihadiya palace in June 2013, putting the onus on the Copts for the ouster of President Mohammed Morsi on July 3, 2013. The fact that these extremist groups have political weight in Minya has resulted in Copts being constantly subjected to sectarian-related acts of violence, Zakher added.

Zakher added that sectarian-related problems in Minya are handled in a bureaucratic way that is contributing to their rise. He said the premiership said in a statement Jan. 15 that no church was closed in Minya; while this is administratively correct, that is because there is no licensed Coptic church in the village. He said the only licensed church there is Evangelical and was never shut down. Nevertheless, Coptic prayers were being performed in one of the village’s buildings and this building was closed, he said.

Saied Sadiq, a professor of political sociology at the American University in Cairo, told Al-Monitor, “Many factors contribute to sectarian-related acts of violence in Minya, [including] the lack of economic development in Upper Egypt, which has 700 out of the 1,000 poorest villages in Egypt. [In addition,] Christians have a major presence in Minya, where a large percentage of the population lives in poverty. The fact that there are a number of well-off Christians is being used to feed sectarianism among the Muslim poor.”

Sadiq added, “Minya’s geography paves the way for extremist groups to be there, using the unexploited desert hinterland as hideout and the narrow routes to Libya and Sudan to flee. This is why when the Islamic State organization tried to move the theater of its operations from Sinai, given the high-tempo operations there, it opted for Minya [and carried out] the incident of St. Samuel the Confessor Monastery. Furthermore, the governorate had been a home for many leaders of the Brotherhood and other religious extremist groups leaders.”

He indicated that the way the state is dealing with terrorism in some places is by allowing its presence elsewhere. The state is not willing to open a front against extremism in Minya, particularly in light of the ongoing war on terrorist groups in Sinai, he added. Sadiq said this is why the state often gives in to extremists’ demands.

Al-Monitor tried to speak with two Orthodox Church officials, Bishop Agathon of Magagha and Adwa diocese and Bishop Makarios of Minya, but both refused to make any comment.