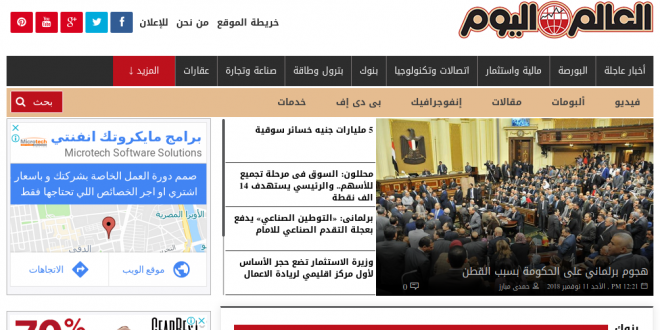 Journalists affiliated with the Al-Alam Al-Youm newspaper initiated an ongoing sit-in on October 21 at the Journalists Syndicate, protesting newspaper management measures that have deprived them of pay and may lead them to losing syndicate protection. On Sunday, the board of the syndicate expressed its “full solidarity” with the journalists and referred members of the newspaper’s management to an internal disciplinary committee for investigation.

The journalists’ grievances center on a possible change in the newspaper’s ownership structure. Al Alam Al Youm is owned and operated by Al-Akhbar al-Saeeda, which is owned by TV personality Emad Eddin Adib, who also owns the foreign press outlet Good News, according to syndicate board member Amr Badr. But according to journalists at the newspaper and syndicate members, there are plans to transfer Al-Alam Al-Youm’s affiliation to Good News.

If this change were to go through, the newspaper’s journalists tell Mada Masr that the poor conditions they have faced at the hands of management — unpaid salaries and unpaid social security contributions — may be exacerbated due to the loss of many of the rights and financial benefits syndicate membership provides.

Badr told Mada Masr that the newspaper’s management has not paid over 50 journalists for at least three months. He added that Al-Alam Al-Youm employees also recently learned that the company closed its insurance files in 2014.

The sit-in, now ongoing for almost three weeks, seemed to do little to change the minds of Al-Alam Al-Youm’s management.

“The administration insists on transferring the newspaper’s ownership to a foreign licensed company, which will result in employees no longer being affiliated to the press syndicate,” said Sayed Abdel Rahman, one of the journalists participating in the sit-in. “This will leave them alone, without any support from the syndicate, in the face of an administration that has already dismissed a number of their colleagues.”

According to the journalist, those involved in the sit-in are considering steps to escalate their demonstration, including holding further protests, calling the syndicate’s general assembly members to attend, or even commencing an open hunger strike.

According to the syndicate’s Sunday statement, the decision to refer Al Alam Al Youm’s CEO Gamal Enayet, its Editor in Chief Naglaa Zakri and Adib to a disciplinary committee comes after the syndicate board “received responses from the newspaper’s management that do not reflect their seriousness in resolving this crisis.”

In a November 3 statement, the syndicate had announced that Adib, Enayet and Zakry must pay the unpaid salaries and social security contributions and halt the closure of its newspaper and the transfer of employees. The newspaper’s administration had one week to respond to the syndicate’s demands.

Regarding the reason behind Al-Alam Al-Youm’s failure to pay salaries, Badr and Abdel Rahman note that the newspaper sought to impart pressure on its employees ahead of its intended transition to a foreign licensed institution.