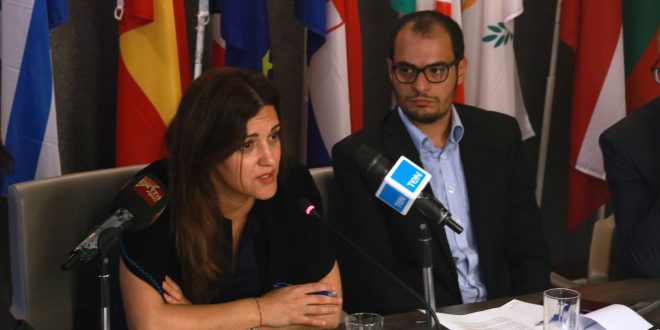 The European Parliament (EP) has called for enhanced Egypt-EU cooperation, and a “political dialogue based on shared values, and respect for human rights” in its 12th inter-parliamentary meeting with Egypt’s parliament, according to an EP press statement.

Delegates from both parliaments met in Cairo on Tuesday and Wednesday, led by Ms. Marisa Matias, Chair of the EP Delegation for relations with the Mashreq countries, and Mr. Kareem Darwish, Chair of Egypt’s Foreign Affairs Committee.

The EP delegation emphasized Egyptian authorities’ need to deepen their “courageous” social and economic reforms within a democratic framework, the press release reads.

Delegates also called on the EU and Egypt to enhance their partnership, in hopes of overcoming common challenges and building a better future for each other’s citizens, “whose immense majority aspire to live in a free, safe, tolerant and pluralistic society”.

Such a partnership, the statement continues, also ought to foster a political dialogue based on shared values, respect of the rule of law, and international agreements.

In this spirit, the EP raised several cases to the Egyptian delegation of citizens whose rights, the statement claims, had been infringed.

It adds that delegates recalled that in both the EU and in Egypt, “sustainable development and security can only be achieved when human rights and fundamental freedoms, including freedom of expression and the right to peaceful dissent, are fully respected”.

At the end of the meeting, EP delegates thanked their Egyptian hosts for their hospitality and openness for dialogue, stressing the importance of cooperation with Egypt – which, the statement closes, is “a key partner for the EU”.

The inter-parliamentary meeting represents an ongoing dialogue between Egypt and the European Union, and follows Speaker Dr. Ali Abd el Aal’s visit to the EP in Brussels, last June.