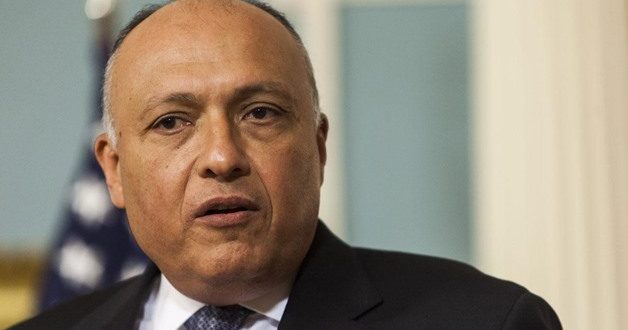 Minister of Foreign Affairs, Sameh Shoukry, will head on Tuesday, Oct.23 to Khartoum, Sudan, to preside over the Egyptian delegation in the preparatory ministerial meeting of the High Joint Committee between Egypt and Sudan.

Spokesperson of the Ministry of Foreign Affairs Ahmed Hafez said the meeting comes as part of the two countries’ keenness to activate common cooperation in different fields and to stress the deep historical relations.

Hafez referred that the diplomatic relations between the two countries have been greatly promoted in 2018, referring to several meetings held between the two sides, including the summit held in Addis Ababa on the sidelines of the African Union (AU) summit in January 2018, a meeting of Egyptian and Sudanese foreign ministers and heads of intelligence on February 8, 2018, and a meeting with Sudanese President Omar al-Bashir on March 19.

He added that the development of the bilateral relations between the two countries have been reflected in holding several meetings at the political, economic, services and cultural levels.

He explained that the main outcomes of these meetings were the agreement on activating the link between Egyptian and Sudanese railway lines and enhancing the partnership between the two sides in the agricultural field.

He added that both sides agreed on establishing an industrial zone in Sudan, encouraging medical tourism, sending medical convoy to Sudan and cooperating in sports and youth fields.

The spokesperson concluded that political consultations between the two ministers of foreign affairs will be held during Shoukry’s visit to Sudan to develop the bilateral relations between in different fields and to highlight common international and regional issues.

President Abdel Fatah al-Sisi will visit Khartoum on Thursday, Oct. 25 to attend the 24th summit with his Sudanese counterpart Bashir to sign several agreements and memoranda.

A matrix to implement joint projects is expected to be approved during the summit, according to Sudanese Ambassador to Cairo Abdel Halim Mahmoud.

During Sisi’s visit to Sudan in August, the two leaders agreed to coordinate security efforts in the Red Sea and to enhance economic and trade cooperation.

The visit will be Sisi’s sixth to Sudan since he assumed power in 2014.

A supreme committee formed to promote Egyptian-Sudanese relations will convene Oct. 22-25, and its meetings will include top officials from the two African nations, as well as the irrigations ministers.

Most importantly, creating a positive investment environment, intermodal passenger and goods transport, including railways, river, sea, and land transportation will be discussed by the committee.

Furthermore, the enhancement and guidance of the Egyptian-Sudanese Company for Agricultural Integration will be given a major priority during the busy week.