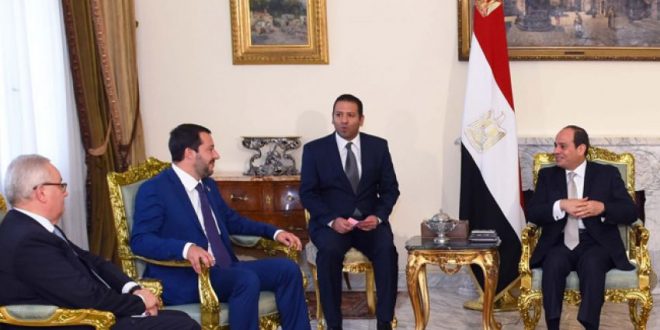 Eight years ago, a photo of the brutalised body of Khaled Said, a young man from the Egyptian port city of Alexandria, went viral on social media. Said had been beaten to death by local police, who alleged that he had died from asphyxiation after stuffing a bag of hashish down his own throat.

Public anger over repression, police brutality and impunity under the regime of President Hosni Mubarak had been simmering for years and with Said’s murder, it boiled over. Unprecedented protests took place in Alexandria and Cairo that summer under the slogan “We are all Khaled Said”.

Six months later, in January 2011, Said would become one of the symbols of the Egyptian uprising, as people took to the streets, calling for freedom and dignity and the downfall of the regime. After Mubarak was toppled, graffiti artists painted Said’s face on buildings in downtown Cairo.

Today, the graffiti is gone, whitewashed by the regime of Abdel Fattah el-Sisi, who has unleashed an unprecedented level of violence and repression onto the people of Egypt which many see as “worse than Mubarak’s“.

Report after report by human rights organisations have detailed massacres, mass arrests, torture in detention, forced disappearances and death sentences in Egypt, calling on the rest of the world to take action.

The European Union, however, has chosen to ignore these pleas and continue cooperation with the Sisi regime. Not even the forced disappearance, torture and brutal murder of one of its citizens in 2016, Italian student Giulio Regeni, changed this stance; his mother, Paola Regeni, famously said: “They killed him like an Egyptian.”

After an initial rebuke of the Egyptian authorities, who are seen as being responsible for the murder, Italy quietly returned its ambassador to Cairo last year and proceeded to conclude an energy deal with Egypt.

Today, the racist far-right Italian government is at the forefront of EU efforts to strike deals with North African countries to prevent desperate people fleeing violence, abject poverty and war from reaching European shores. One of these states is el-Sisi’s Egypt.

In mid-September, it emerged that the EU is negotiating a deal with the Egyptian dictator to have his security forces up their policing of coastal waters and divert vessels carrying refugees to Egypt. In return, the Egyptian regime will receive financial support and investment and high-profile visits from European leaders.

If such a deal is concluded, this would be a bright and shiny proof that for the EU, Egyptian lives don’t matter.

Since el-Sisi took over in a bloody coup in the summer of 2013, his human rights record has gone from bad to worse. Tens of thousands have been imprisoned under various repressive laws – from activists and journalists to ordinary people.

Human Rights Watch has declared that there is a “torture epidemic” in Egypt which may constitute a crime against humanity. Amnesty International has documented the forcible disappearance of hundreds of Egyptians. The world has baulked at the number of court cases in which death sentences have been handed down to dozens of civilians.

And beyond the everyday repression Egypt’s general population is facing, el-Sisi’s regime has not spared refugees either. Since 2013, human rights defenders have called on the Egyptian authorities to stop arbitrarily arresting and deporting Syrian and Palestinian refugees. Syrians deported to Damascus have been at a high risk of facing detention and torture by the Syrian regime.

The Egyptian police have also been detaining and harassing refugees and asylum seekers from Sudan and the Horn of Africa, with NGOs reporting that hundreds were detained for seeking to leave Egypt “illegally”. In 2015, Egyptian border police shot and killed 15 Sudanese migrants and wounded another eight at the Egyptian-Israeli border.

If Egypt starts diverting intercepted boats to its shores and intensifies its crackdown on refugees and migrants who make it through its borders, its fundamentally flawed judiciary and appallingly tough conditions in Egypt’s immensely overcrowded prisons strongly suggest that this will result in an abundance of human rights abuses.

Given its overloaded healthcare system and inadequate social provision, it is also highly doubtful that it would be able to provide for the basic needs of these people. Severe restrictions placed on the operations of over 47,000 NGOs through a draconian bill also mean that the non-profit sector will not be able to help either.

It is in the context of these past and future human rights abuses that the EU’s decision to work with el-Sisi must be strongly condemned. Any deal struck with the Egyptian president will diminish the diplomatic legitimacy and moral authority of the EU in Egypt and beyond.

Any arrangement whatsoever with el-Sisi will justify Italian Interior Minister Matteo Salvini’s blatantly racist, violent and hostile policies towards migrants and the much-maligned NGOs trying to help them.

This intended partnership is the unfortunate and painful betrayal of liberal democracy and every individual unfairly imprisoned, tortured, forcibly disappeared and killed by Egyptian security forces since 2013.

And all the wonderfully crafted EU statements lambasting the undemocratic actions of authoritarian governments in the Democratic Republic of the Congo, Gabon, Equatorial Guinea and Cameroon will ring shamefully hollow once questioned through the dark, blood-filled prism of regressive diplomatic solidarity with el-Sisi.

No doubt the Egyptian president will use his administration’s partnership with the EU as diplomatic cover for further brutal clampdowns on human rights campaigners, NGOs and political rivals, all to bolster his wafer-thin legitimacy. No doubt el-Sisi’s propaganda machinery will go into overdrive publicising his EU engagements as solid proof of his supposedly strong, progressive and indispensable leadership on the world stage.

No doubt ordinary Egyptians and desperate migrants from the Middle East, sub-Saharan Africa and the Sahel region will come to understand and experience first-hand how the EU has no genuine desire to help foster stability, security and prosperity, democracy, fundamental freedoms and the rule of law in Egypt.

And no doubt, after all is said and done, many will soon come to realise the hard way that the EU does not promote and practise the gospel of democracy it preaches and cares little if at all about Arab and African lives.