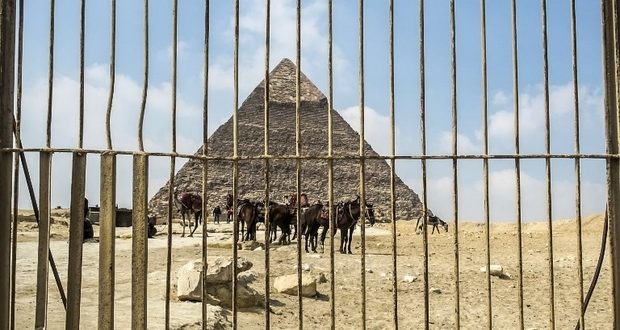 A picture taken on February 15, 2018 shows horses standing in front of the Pyramid of Khafre (Chephren) at the Giza pyramids complex, on the southwestern outskirts of the Egyptian capital Cairo. / AFP PHOTO / KHALED DESOUKI

Summer is officially over. The chill autumn winds are blowing, the kids have gone back to school, traffic on the morning commute has returned to its soul-crushing normality, and you’re beginning to remember just how much you hate your life.

And so, after a week or two back in the office and the miserable daily routine, the minds of the middle classes across the northern hemisphere turn inevitably to a single thought: escape. More specifically, the “winter sun” holiday.

According to research commissioned by a travel discount agency last year, a staggering 22 million Britons were expected to make an international getaway in the winter of 2017, with more than half of those polled saying they were more likely to book a holiday over the festive period than they were five years previously – and many citing high prices for travel during the traditional summer stretch.

How on earth can anyone afford a holiday in either summer or winter in our age of austerity and zero-hours contracts is beyond me, but even taking these figures with a suitably journalistic pinch of the proverbial salt, it’s clear that a huge number of people are, right now, either fantasising about or actually planning a trip to sunnier climes.

A staggering 22 million Britons were expected to make an international getaway in the winter of 2017, with more than half of those polled saying they were more likely to book a holiday over the festive period than they were five years previously

The question is: where to go? If you’re a Brit, Europe is probably out of the question, unless you want to spend a week apologising to bewildered continental-types about Brexit and explaining how such a patently idiotic thing could have happened. Not exactly my idea of a holiday. What’s more, much of mainland Europe is even colder than Britain during the final months of the year.

No, if sun is your thing and the thought of bumping into US President Donald Trump on a Florida golf course makes your blood run colder than an arctic fox sitting in a tub of Haagen-Dazs, the Middle East is the obvious choice.

A picture taken on 30 May 2016 shows workers walking in front of a construction site at the Motiongate park, part of Dubai Park and Resorts (AFP)

Many people head to Dubai in the winter. In fact, people flock in their thousands to the global capital of poor taste and gaudy excess for the annual gilt trip – a pilgrimage to the Mecca of rentier capitalism. Never mind the slave labour, the criminalising of dissent, and the repression of the press. If you’re white and wealthy and willing to pay 15 bucks for a beer you can pretty much explore the depths of your depravity – as long as you do it behind closed doors. And the weather’s nice.

That may sound like I’m recommending a trip to the UAE, and I’m really not. I can cope with state-level hypocrisy (I do live in Britain, after all), but I like somewhere with a little more history and culture.

Egypt has it all?

So the package holiday catalogue gets flipped to the Egypt page. Egypt has it all, surely? Ancient monuments both in the chaotic capital and along the Nile; travel over to the Sinai coast and there’s some of the world’s best diving, winter temperatures averaging above 20C (70F). Who could want more?

My friends, please don’t go to Egypt. Five years after the military coup that ousted the country’s first democratically elected civilian president, Egypt remains a police state. According to Amnesty International, Egypt is an open-air prison.

The message from the state is clear: speak out and be jailed. The regime declared war on democracy and civic life

You might expect political activists to be targeted. It’s an outrage, but in a repressive police state, those who attempt to assemble in the name of democracy and freedom are always the first to feel the jackboot. Journalists who deviate from Egypt’s state narrative, meanwhile, are deemed to be terrorists, and have been locked up in their dozens, their newsrooms shuttered and distribution banned.

But it’s not just activists and journalists.

Before the popular uprising that took place on 25 January 2011, football fans were one of the few groups with experience of organising large crowds of people. During the uprising they came out to defend peaceful protesters who gathered in Tahrir Square demanding freedom, dignity and social justice. With no fear of confronting the police, it’s probably no surprise that the regime has identified football fans as a threat to their rule, banning “ultras” groups and clashing violently with crowds after matches.

Speak out and be jailed

Since last December, Amnesty International documented cases of at least 111 people who have been locked up by security forces for criticising President Abdel Fattah el-Sisi. Another 35 were jailed for being “part of a terrorist group”, when all they had done was join a protest about high Metro fares.

The message from the state is clear: speak out and be jailed. The regime has declared war on democracy and civic life.

Candidates who stood against President Sisi in the most recent presidential “elections” were imprisoned. Huffington Post journalist Moataz Wadnan interviewed one of the candidates in February, and was arrested the following day. He’s not been seen since.

Football hero Mohamed Aboutrika, who scored Egypt’s winning goal in the 2008 Africa Cup of Nations final, dared to work as a commentator for BeIN Sports – a network based in Qatar, a nation which is the target of a Saudi-led, Egypt-backed regional embargo. He found himself accused of financing the Muslim Brotherhood and added to Cairo’s “terror list”.

Popstar and host of the Arabic edition of “The Voice”, Sherine Abdel Wahab, was sentenced to six months in prison for suggesting the waters of the Nile were not safe to drink. Blogger Ahmed Douma was jailed for three years for a Facebook post allegedly insulting the judiciary. Hundreds of websites and news outlets, including The New Arab and Middle East Eye, have been blocked or censored.

And that’s before we consider the murder of Giulio Regeni.

The Italian student was researching street vendor trade unions in Egypt when he disappeared. Cairo has admitted that he was being followed by state security agents due to the “sensitive nature” of his work. When the 28-year-old’s disfigured body was found, it was covered in wounds which rights groups have said were a hallmark of Egypt’s brutal detention facilities. Italian officials allege he was stalked by a network of nine agents who then abducted him, tortured him for seven days, then killed him and dumped his body.

This crackdown on dissent all began with the Rabaa massacre on 14 August 2013, when security forces shot and killed nearly a thousand unarmed people protesting against his military coup. The corpses were mutilated by flames when troops subsequently set fire to the mosques in which the bodies lay, making identification all but impossible. Nearly 4,000 people were injured in the attack.

Since the massacre, more than 1,700 people have been “disappeared” as the regime tries to erase the memory of that day.

That day inaugurated a new era in police state violence in Egypt. Survivors report routine use of torture in interior ministry dungeons, with beatings, electric shocks and even rape being used as a weapon to extract false confessions.

As many as 60,000 political prisoners languish in the cells. A holy unrighteous farce of a judicial system conducts mass trials lasting just minutes each.

The scale of the detentions is such that Egypt has had to build 13 new prisons to cope with all the detainees.

With Washington and European nations continuing to sell weapons to the Sisi regime to use on its own people, and the regime propped up further by the UAE and Saudi Arabia, Egypt is going to be just fine without your tourist dollars. Don’t go to Egypt for your holiday.