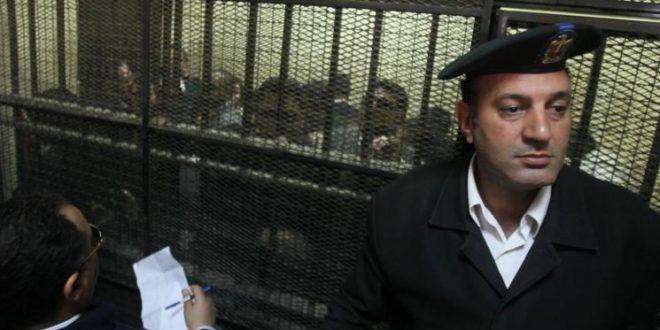 Nearly a dozen rights groups on Tuesday condemned the passing of death sentences by an Egyptian court against 75 people, including top leaders of the outlawed Muslim Brotherhood group, as the government of general-turned-president Abdel-Fattah el-Sisi duelled with the UN and EU over the verdicts.

A statement by the 11 organisations rejected the trial’s proceedings, saying they exemplified the “degraded standards of fairness, impartiality and independence that define Egypt’s dysfunctional judiciary”.

They also demanded an immediate end to capital punishment and a moratorium on executions.

The statement was the latest in a flurry of condemnations by rights groups, as well as the UN human rights commission and the European Union, of Saturday’s verdicts.

The case involves 739 defendants who faced charges ranging from murder and damaging property to incitement of violence.

Beside those sentenced to death, 374 received 15 years and 215 five years. A total of 23 defendants received 10-year jail terms. Charges were dropped against five defendants because they died. The sentences can be appealed.

The case is rooted in a 2013 protest by supporters of Mohammed Morsi, a stalwart of the Brotherhood whose one-year rule of Egypt ended when the military, then led by el-Sisi, ousted him.

It is widely believed that breaking up the sit-in along with another one across Cairo, also staged by Islamists, left an more than 1,000 people dead.

Amnesty International also blasted the death sentences just hours after they were passed, describing the trial as “disgraceful”.

A day later, Michelle Bachelet, the UN human rights commissioner, warned that it would be an “irreversible miscarriage of justice” if the death sentences were carried out.

On Tuesday, the European Union reiterated its opposition to capital punishment and said the circumstances of the Egyptian mass trial “cast serious doubts on the respect of due process and in particular the defendants’ rights to a fair trial”.

Egypt’s foreign ministry rejected Bachelet’s criticism in a strongly worded statement, saying that her comments amounted to an “unacceptable encroachment upon the work of the Egyptian judicial system and those presiding over it”.

It also called on Bachelet to “observe impartiality and objectivity” and focus on promoting human rights.

On Tuesday, the ministry issued a separate statement saying the EU commission’s comments were biased and showed no respect for the rule of law or the judiciary.

Several mass trials of Islamists that yielded dozens of death sentences have been held in Egypt since the 2013 ouster of Morsi.

The trials and death sentences have consistently drawn scathing criticism from rights groups at home and abroad, which have branded the process a mockery of justice.

The trials are part of a massive crackdown by authorities overseen by Sisi that saw the jailing of thousands of Islamists along with some of the secular, pro-democracy activists behind a 2011 popular uprising that forced autocrat Hosni Mubarak to step down after 29 years in power.

The crackdown has also enforced tighter controls over the media as well as civil society groups, rolling back most of the freedoms won by the 2011 uprising.