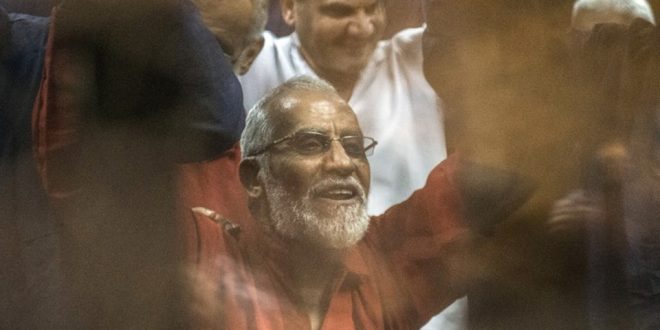 Days after a court in Egypt sentenced to death 75 people, including top Muslim Brotherhood leaders, the political wing of the organisation has urged the international community to take “urgent measures” to halt their execution and investigate the “improper” mass trial.

In letters to the United Nations, the European Union and the African Union (AU), Egypt’s Freedom and Justice Party (FJP) on Tuesday said the sentencing by the Cairo Criminal Court amounted to a “miscarriage of justice” and “violated” the international standards of a fair trial.

“We ask for your urgent action before any of the people sentenced to death are executed,” the FJP said in identical letters addressed to UN Secretary-General Antonio Guterres, EU head Jean-Claude Juncker and AU’s chairperson Paul Kagame.

“The mass trials and extraordinary harsh and disproportionate sentences that have been taking place since 2013 are clearly designed to suppress civilian opposition to the military-backed government,” the letter added.

On September 8, the court in the Egyptian capital sentenced more than 700 people, including hundreds of members of the banned Muslim Brotherhood, for inciting violence and organising protests against the military coup that overthrew the government of Egypt’s first freely elected president, Mohammed Morsi, in 2013.

Senior Brotherhood leaders Essam el-Erian and Mohamed Beltagi were among the 75 sentenced to death, while Mohamed Badie, the organisation’s spiritual leader, along with 46 others, was handed a life sentence.

Nearly 600 others received prison terms ranging from five to 15 years. Among them was Al Jazeera journalist Abdullah Elshamy, who was sentenced to 15 years in absentia.

The crackdown on dissent in Egypt since 2013 has seen the authorities prosecuting hundreds of people for protesting against the military coup, even as those trials have been repeatedly questioned by the UN and other international agencies.

On the morning of August 14 that year, Egyptian security forces moved into Cairo’s Rabaa al-Adawiya Square and opened fire, killing more than 800 people within hours, in what came to be known as the Rabaa massacre.

Thousands of Muslim Brotherhood supporters and pro-democracy activists were arrested on the day of the massacre and in the following months.

In 2014, an Egyptian court ordered the FJP’s dissolution, months after the designation of the Brotherhood as a “terrorist organisation”.

Since the 2013 coup, a police crackdown against the Muslim Brotherhood, which maintains that it is a peaceful organisation, has left hundreds dead and tens of thousands in jail, many under draconian anti-protest laws.