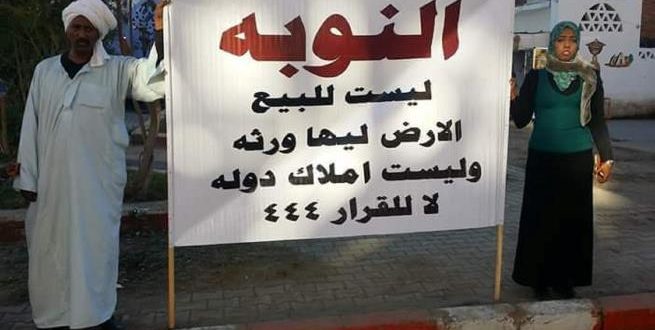 On June 5, the Egyptian parliament approved the Upper Egypt Development Agency bill, dealing a crushing blow to the hopes of the Nubian minority. The community, which represents around 3 percent of the population, has been struggling for decades to return to their home villages from which they were displaced en masse in 1964 to enable the construction of the Aswan High Dam. Government promises to ensure Nubians’ right to return have remained unfulfilled, and the latest bill has confirmed fears it never will.

The Nubians’ expulsion dates back to 1902, when Egypt began working on the Aswan Low Dam to regulate the annual Nile floods. Most left between 1961 to 1964 during the construction of the High Dam, which flooded several dozen villages. At various stages during the dam’s construction, the state seized additional tracts of dry land along the Nile, forcefully relocating 135,000 Nubians living in 44 villages spread out over 350 square kilometers (135 square miles). These Nubians were resettled in the desert far from their fields and property, though the state promised to provide compensation and return them in the future either to their original villages or—if the sites were flooded—to new farmland along Lake Nasser near their ancestral homes.

Although Egypt’s successive governments all ignored these promises, the 2014 constitution revisited the issue. Article 236, which requires the state to contribute to the development of marginalized regions, also stipulates that it implement projects to return the population of Nubia to their home regions within ten years. On October 8, 2014, in accordance with the new constitution, Minister of Transitional Justice and Parliamentary Affairs Ibrahim El-Hunaidi formed the Nubia and Aswan Development Committee, specifically tasked to implement Article 236. The committee defined the people of Nubia as being those displaced by the expansion of the Aswan Reservoir in 1902, 1912, and 1933; the 1960-64 construction of the High Dam; and their descendants. The committee met with Nubian citizens and NGO representatives in Aswan, Cairo, and other provinces, as well as representatives of the Nubian community abroad, and heard their demands to return and their proposals for integrated development along the banks of Lake Nasser.

An 18-member subcommittee subsequently drafted a bill outlining the creation, jurisdiction, and responsibilities of an authority to oversee the return of the Nubian people to their villages, including regulations on how the land can be used. Nine of the sub-committee’s members were Nubians, and most of the other nine were drawn from the armed forces, the Ministry of Irrigation and Electricity, and the Lake Nasser Development Agency. This committee announced on November 11, 2014 that the draft bill to form the agency for developing Nubia was ready to submit to parliament for approval.

But the committee never sent it to parliament, although no official reason was given. Local news outlet Mada Masr reported that state actors had shot down the bill on the basis of national security. Validating this, President Abdel Fattah el-Sisi issued executive order 444/2014 on November 29, 2014 delineating Egypt’s borders. Under this order, the coastal towns of Ras Hadraba and Arfeen, as well as the 35-kilometer paved road from Hagr El-Shams to the port of Qastal—a region that includes the sites of sixteen former Nubian villages—were declared a military zone off-limits to civilian settlements.

Since then, and disregarding Nubian anger at the order, the Sisi government has forged ahead with plans to use additional nearby land for investment and development. On October 26, 2016, hoping to attract real estate investment, the state put up 1.5 million feddans (6300 square kilometers or 2400 square miles) of land for sale in El-Maghara, El-Farafara, West Minya, and Toshka—the last of which is part of Nubian territory. In response, protesters launched unprecedented demonstrations in the area, blocking off the highway from Aswan to the tourist site of Abu Simbel on November 19, 2016 and staging a sit-in at the Toshka land reclamation project.

In addition, the new Upper Egypt Development Agency bill passed in June 2018 mandates that a government agency be created to develop a plan to jumpstart comprehensive economic development for the southernmost parts of Upper Egypt, including most of the Nubians’ ancestral territory not already flooded, sold off, or declared a military zone. This is part of the government’s overall economic development plan to implement high-return, employment-generating national projects—including selling land to be used for farming and fishing, expanding local services, and building roads—with the goal of improving the quality of living in those provinces. Although these development projects would benefit all residents of these regions, most notably by creating employment opportunities in agriculture and construction, many displaced Nubians no longer reside in these areas. Moreover, the new agency would sell off former Nubian property to Egyptian and foreign investors at prices Nubian farmers cannot afford. The government has also refused to give Nubians right of first offer to purchase these tracts or include them in managing the development projects that will be situated on their former land.

Yassin Abdul Sabour, a Nubian MP, sharply criticized the new law for violating the constitution, as have other lawmakers from Upper Egypt. Minister of Legal and Parliamentary Affairs Omar Marwan insisted that the law was actually an implementation of Article 236, claiming that “Nubia is an original part of southern Upper Egypt, and undoubtedly gets a share of this law and the agency, and will be included in the development within the areas of southern Upper Egypt.” Yet because neither he nor the new bill ever mentioned the right of return, Nubians have seen this as yet another empty government promise.

That this bill was discussed behind closed doors reaffirms suspicions that the government and parliament—the majority of which is part of the staunchly pro-Sisi Tahya Misr (“Support Egypt”) coalition—does not intend to fulfill this obligation. From the cabinet’s submission of the draft bill on February 19 to May 14, when parliament approved the bill in principle, the parliamentary committee on local administration prepared and debated the law’s articles in secret. It did not even invite the ten deputies from Aswan Province to attend any of their meetings. This prompted Yassin Abdul Sabour to pull out of the session in protest, with MP Mustafa Bakri likewise withdrawing in solidarity.

With passage of the new Upper Egypt Development Agency bill, which does not mention their cause even once, the Nubians are left disillusioned and frustrated with the state. They expect little aid from fellow Egyptians due to their marginalization within society: media outlets, most of which belong to the state, largely ignore their cause. In a last resort, Nubian activists have met with Danish human rights lawyer Christian Harlang about filing an international lawsuit on behalf of the Nubian people at the African Court on Human and Peoples’ Rights and the European Court of Human Rights. Without any legislative recourse, Nubians are faced with either remaining silent or internationalizing the issue in the hopes of bringing attention to their plight.