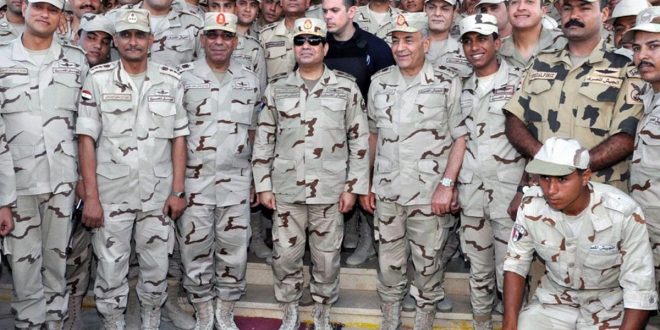 The Military’s Immunity in Egypt

On July 16, the Egyptian Parliament approved the Law Concerning the Treatment of Some Senior Officers of the Armed Forces, the latest in a number of legislative maneuvers to consolidate the power of the presidency over the military and provide immunity to senior military personnel who might be accused of mass repression or financial corruption.

The new law, though brief, has a number of significant provisions. Article one states that the president can call upon senior army officers to serve in the military for life, even if they have already resigned their military posts and rejoined the civilian workforce. The law does not specify a minimum rank, allowing the president to select at will the officers to whom it will apply. This effectively bars potential contenders within the top military brass from running for office and challenging Abdel Fattah el-Sisi, as Egyptian law prohibits active or reserve military from holding office—a requirement that the state used to block Sami Anan, the former chief of the general staff of the armed forces, from running against Sisi in the March 2018 presidential election. Anan’s declaration of his intent to run led to his arrest on January 23 and subsequent charges of creating discord between the military and the people.

Article five forbids any investigation of these officers for acts committed in their official capacity between July 3, 2013 and January 10, 2016, unless permitted by the Supreme Council of the Armed Forces (SCAF). A number of acts of mass repression were committed during this period, the most notable of which is the Republican Guards massacre on July 8, 2013, when Egyptian security forces killed 51 protesters, and the Rabaa massacre of August 14, 2013, during which at least 817 protesters were killed.

This law is aimed at protecting senior military officers from any attempt to investigate these events and the possibility of domestic prosecution. Although there are currently no open investigations, there is clear evidence gathered by NGOs documenting the crimes committed, which could be used as a basis for possible future investigations.

Furthermore, article six provides diplomatic immunity to these officers when travelling abroad, in an attempt to shield them from possible international prosecution—which is itself an unlikely scenario as Egypt is not a member of the International Criminal Court (ICC) and prosecuting officers in another foreign court would be procedurally and diplomatically complex.

In addition to these protections, the law offers a reward system, outlined in articles two and four. Article two states that every officer that the president calls upon to serve for life will have the privileges of a minister—if they had not achieved a high enough rank to possess them already. This, for example, could include large salaries, bonuses, travel stipends, and personal security guards. Article four stipulates that these officers will also receive military decorations to be determined by the president as a reward for their efforts during the transitional period—each of which is accompanied by increases in pension.

Laws protecting senior military leaders are already enshrined in the Egyptian constitution and legal system. Article 204 of the constitution states that only military courts have the authority to prosecute members of the military and the general intelligences services for any crimes they might have committed in their capacity as members of the armed forces. In most countries, the jurisdiction of military courts is restricted to crimes committed against the military establishment or other members of the armed forces. Because the nature of these crimes are not specified, this clause shields active military from civilian courts prosecuting them not just for acts of physical repression but also a range of other offenses, including financial crimes. In the unlikely event that a military court does try an officer for a crime committed against a civilian, the judges—who are military officers themselves—are rarely impartial.

Moreover, Egyptian laws have broadened the scope of this military immunity from being tried in civilian courts. For example, in July 2011 SCAF issued Law 133, an “exceptional legal rule” stating that the officers serving on SCAF at the time will remain in reserve military service even after they reach the age of retirement. This ensured the top military brass secured a safe exit from power, since they can no longer be tried in civilian courts under this law. This both shields them from possible prosecution and blocks them from running for political office, as in the case of Sami Anan.

This protection also extends to cover financial crimes. In May 2012, parliament amended Law 25 of 1966 to allow for military courts to prosecute and investigate financial crimes only after the accused officer has retired. The law is designed to hamper investigations into possible financial crimes, since waiting to investigate until the accused retires would make it harder to collect evidence to prosecute them. In combination with the new law, which allows the president to designate senior offers to serve for life, the top brass in favor with the president effectively enjoys unlimited impunity regarding corruption and financial crimes, which even a military court cannot prosecute. This further ensures the top officers’ political loyalty to Sisi, the only one who can grant this protection, as he moves to consolidate power further.

Together, these laws shield the top brass from any possible domestic or international trials for acts of repression. Moreover, they create a legal system that is conductive to corruption, since the only legal oversight for members of the military is through military courts after the accused’s retirement, and even this weak oversight can be overcome by the president’s decision to call upon any senior officer for lifelong active or reserve service. Considering the economic expansion of the military over the past few years and its involvement in large-scale economic activities in the private sector, military officers have increased opportunities for mass corruption and personal enrichment.

Significantly, the new law further subordinates the top brass to the president, who can quell the political ambitions of top generals simply by calling on them to serve for life. This strengthens the president’s grip on the military and incentivizes them to stick by him to reap the individual benefits. Even though there is the possibility individual officers may challenge Sisi in the next presidential elections—assuming presidential term limits will be extended, as is widely expected—the privileges within the latest law ensures the top brass will be motivated to subdue any possible rogue elements.