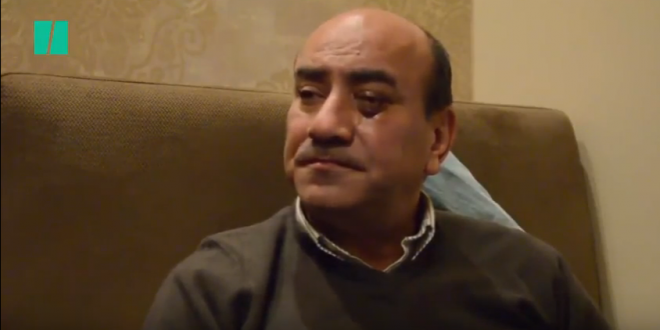 Egypt’s military prosecution renewed the detention order for former head of the Central Auditing Authority (CAA) Hesham Geniena for an additional 45 days on Tuesday, pending investigations into his claims that detained former Armed Forces Chief of Staff Sami Anan had documents implicating the state in a number of violent incidents in the aftermath of the 2011 revolution.

Geneina’s lawyer, Ali Taha, told Mada Masr he requested that his client be transferred to hospital for medical checkups and that he be allowed time out of his prison cell, noting that Geneina, who was a member of Anan’s now suspended presidential campaign, has not been allowed to leave his cell since he was arrested on 13 February.

Taha also said he requested prison authorities to allow Geneina to receive food brought to him by his family.

Geneina’s case does not meet the conditions needed to justify pretrial detention, Taha added, insisting that his client knew that he would be summoned by the prosecution a day prior to his arrest and did not attempt to escape, although he knew he would likely be jailed.

“During the past 15 days, Geneina has not been questioned by anyone and no evidence has been leveled against him. What, then, is the excuse for his detention?” Taha asked.

He also said Geneina requires a medical examination due to the injuries he sustained from his January 27 assault, which the former CAA head has since accused state institutions of planning on several occasions.

Geneina delivered his statements regarding Anan’s documents, which he claims are stored abroad, during an interview with HuffPost Arabi, which was published online two days before his arrest.

Moataz Wadnan, the journalist who interviewed Geneina, has since been arrested, and the Supreme State Security Prosecution issued a 15-day detention order for him on February 21.

The controversial interview prompted Armed Forces spokesperson Tamer al-Rifai to issue a statement on February 12, which included assertions that Geneina’s claims constituted a criminal offense and allegations that Geneina intended to sow doubts about the state while it engaged in a counterterrorism operation in North Sinai. “We will use all constitutional and legal rights in protection of national security and to maintain the military’s honor,” declared Rifai.

Anan, who initially announced his intention to run for Egypt’s presidency on January 19, was arrested shortly thereafter and charged with announcing his bid for office without first acquiring the military’s permission, aiming to incite a rife between the Armed Forces and the public and forging his end of service documents.

In his interview with HuffPost Arabi, Geneina said that had not ruled out the possibility that an attempt may be made on Anan’s life while he is in detention, given the nature of the documents possessed by the former Armed Forces chief, which “reveal the third party that is responsible for a lot of political crimes in Egypt that followed the January 25 revolution.”

According to Geneina, Anan intended to present these documents to the judiciary in order to open investigations into a number of violent incidents that occurred after the January 25 revolution.

Geneina also faces another complaint filed by Anan himself, which accuses his former running mate of libel and defamation, as well as a distortion of the former Armed Forces chief’s military history.

In a statement published on Geneina’s daughter Shorouk’s Facebook page on February 16, the former CAA head’s defense team asserted that they had evidence to prove Geneina has been suffering from Post Traumatic Stress Disorder (PTSD) since his January 27 assault.

The defense team therefore concluded that any statements issued by Geneina since his assault “do not reflect his conscious will,” due to his PTSD.

Taha, however, asserted on the same day that Geneina is “the most sane” person he has ever met and that the claims made by his client during the HuffPost Arabi interview are not legally incriminating.