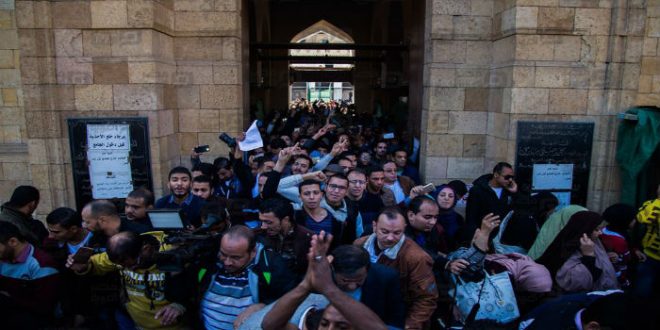 More demonstrations sparked on Sunday across Cairo, Alexandria and other cities protesting against Trump’s decision to move the American embassy in Israel to Jerusalem and recognizing Jerusalem the capital of Israel.

In Cairo, hundreds of students at Ain Shams University protested the decision raising signs and chanting slogans against the US and Israel.  More students demonstrated in University of Zagazig denouncing the decision.

In Alexandria, dozens of protesters gathered at Al-Qaed Ibrahim mosque where they chanted against the decision in support of the rights of the Palestinians.

However, Egypt’s Ministry of Interior (MoI) rejected a formal notification on Saturday that outlined a planned demonstration against Trump’s decision, reported MadaMasr.

“The notification, submitted by Egyptian politicians to the Qasr al-Nil Police Station on Thursday, announced that a protest would take place outside the Arab League’s Cairo headquarters in downtown Cairo on Sunday, between 1 and 7 pm,” according to MadaMasr.

On Friday, a demonstration took to the streets after Friday prayers at al-Azhar mosque where hundreds chanted against Israel and the United States (US) saying “Jerusalem is Arab” and “Down with Israel, down with the US”.

In another demonstration held on the steps of the Journalists’ Syndicate, protestors chanted slogans against the Israeli occupation and in support of the Palestinians’ rights.

In downtown Cairo, where the syndicate is located, security forces surrounded the area to prevent more protests. Police have reportedly arrested protestors arrested during the demonstration.

At the Ameican University in Cairo (AUC), students demonstrated on Campus raising signs saying “Jerusalem is the capital of Palestine”.

According to Association for Freedom of Thought and Expression (AFTE), 10 protestors have been arrested; they are facing charges of demonstrating, cutting off the road among others.