Home / Normal / Egypt journalists: ‘Sorry Palestine, we are governed by a Zionist’ 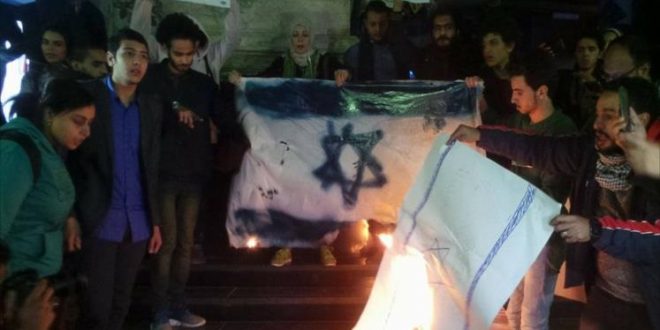 Egypt journalists: ‘Sorry Palestine, we are governed by a Zionist’

Egyptian journalists staged a protest on Thursday evening in front of the Journalists Syndicate in Cairo, objecting to US President Donald Trump’s decision to recognise Jerusalem as the capital of Israel and move the US embassy from Tel Aviv.

A number of public figures took part in the protest, including former presidential candidate Hamdeen Sabahi, human rights activist Tariq Al-Awadhi as well as representatives of the Kefaya Movement, the April 6 Youth Movement and Al-Dustour.

The protesters demanded authorities sever ties with the Zionist entity, expel the Israeli ambassador in Cairo and close the Israeli embassy.

Condemning Arab governments, the protesters changed: “Arab leaders are cowards…either resistance or treachery” and “down with every collaborator”.

In a bold move, they criticised Egyptian President Abdel Fattah Al-Sisi’s response to Trump’s decision saying: “Sorry Palestine, we are governed by a Zionist.”

Polie forces cordoned off the protesters using iron barricades, while riot police were positioned nerby to ensure the demonstration did not spread.
Amr Badr, member of the Journalists Syndicate, described the American decision and said he doesn’t not expect it to be followed through.

In the first official call to boycott US products, the Journalists Syndicate issued a statement which condemned Trump’s decision and called on all Egyptians to boycott American goods.

While the international community has almost unanimously disagreed with Donald Trump’s announcement, reports suggest that the announcement was done with the pre-agreement of Egypt and Saudi Arabia, with the Saudi Arabia going as far as, allegedly, stating to the Palestinian President to accept a village on the outskirts of Jerusalem as the alternative Palestinian capital.

Since the announcement, Saudi Arabia’s royal court has sent notices to the nation’s media outlets to limit the airtime given to protests against Trump’s announcement.