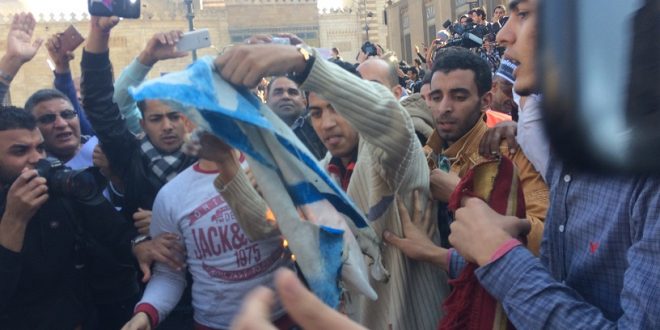 Hundreds of demonstrators gathered in front of Al-Azhar mosque in Cairo after Friday prayers protesting US President Donald Trump’s decision to recognize Jerusalem as the capital of Israel and to move the US embassy to the city.
The demonstration started at the mosque and moved to Azhar Street before security forces prevented protesters from continuing any further, one participant told Mada Masr. Minister of Interior Magdy Abdel Ghaffar then arrived at the scene to monitor the security situation.
The protester, who spoke to Mada Masr on condition of anonymity, said that skirmishes broke out between security forces and protesters, and a number of people were arrested. Videos of the protest are being circulated on social media.
Meanwhile, the whereabouts of two journalists, Ahmed Abdel Aziz and Hossam al-Soueify, who were arrested yesterday during a demonstration in front of the Journalists Syndicate also protesting Trump’s decision, remain unknown. Amr Badr, a board member of the syndicate, told Mada Masr that he is planning to report their disappearance to the Public Prosecutor.
Badr added that syndicate head Abdel Mohsen Salama informed him yesterday that he communicated with a senior officer in the ministry who allegedly promised him that they will be immediately released.
In related news, the Interior Ministry announced that they arrested five people who said they belong to the Muslim Brotherhood in a statement issued earlier today. The statement accused the individuals of conspiring to “inflame public opinion and undermine national stability.”
The statement added that a member of the Brotherhood, who lives in Turkey, broadcast a video online asking citizens to “protest and commit violent acts against state institutions.” The statement added that another broadcast with the same message came from a group that calls itself “Ghalaba,” in which members were instructed to use a weapon that the statement terms “mabrouka.”
The interior ministry spokesperson said investigations revealed that this weapon consists of a “cement block with nails attached” thrown at citizens and cars to “interrupt traffic and initiate chaos.”
According to the statement, police forces arrested five people accused of planning to use these blocks after Friday’s prayer, 50 of which were confiscated.
International Relations and Cooperation
AllCairo
2017-12-08
asaeid
Previous Innocence behind bars: The fate of Egypt’s minors at the mercy of criminal and military courts
Next Grand imam of Egypt’s al-Azhar rejects meeting with US Vice President Mike Pence