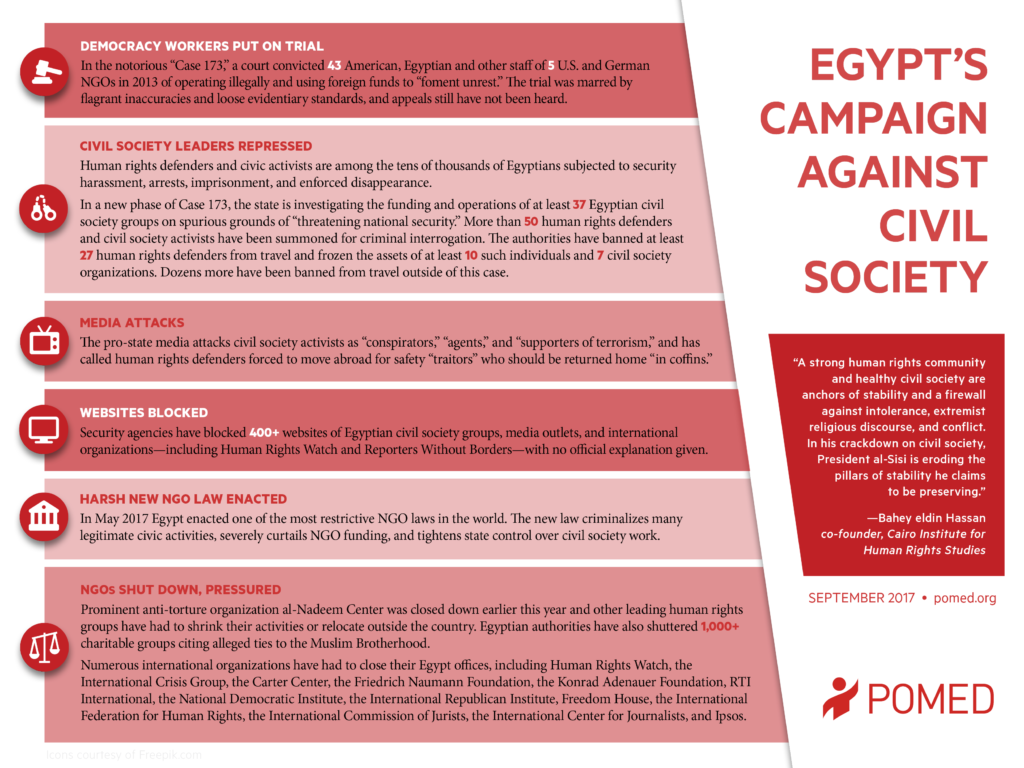 In the notorious “Case 173,” a court convicted 43 American, Egyptian and other staff of 5 U.S. and German NGOs in 2013 of operating illegally and using foreign funds to “foment unrest.” The trial was marred by flagrant inaccuracies and loose evidentiary standards, and appeals still have not been heard.

Human rights defenders and civic activists are among the tens of thousands of Egyptians subjected to security harassment, arrests, imprisonment, and enforced disappearance.

In a new phase of Case 173, the state is investigating the funding and operations of at least 37 Egyptian civil society groups on spurious grounds of “threatening national security.” More than 50 human rights defenders and civil society activists have been summoned for criminal interrogation. The authorities have banned at least 27 human rights defenders from travel and frozen the assets of at least 10 such individuals and 7 civil society organizations. Dozens more have been banned from travel outside of this case.

The pro-state media attacks civil society activists as “conspirators,” “agents,” and “supporters of terrorism,” and has called human rights defenders forced to move abroad for safety “traitors” who should be returned home “in coffins.”

In May 2017 Egypt enacted one of the most restrictive NGO laws in the world. The new law criminalizes many legitimate civic activities, severely curtails NGO funding, and tightens state control over civil society work.

Prominent anti-torture organization al-Nadeem Center was closed down earlier this year and other leading human rights groups have had to shrink their activities or relocate outside the country. Egyptian authorities have also shuttered 1,000+ charitable groups citing alleged ties to the Muslim Brotherhood.

This fact sheet is also available in a PDF version.