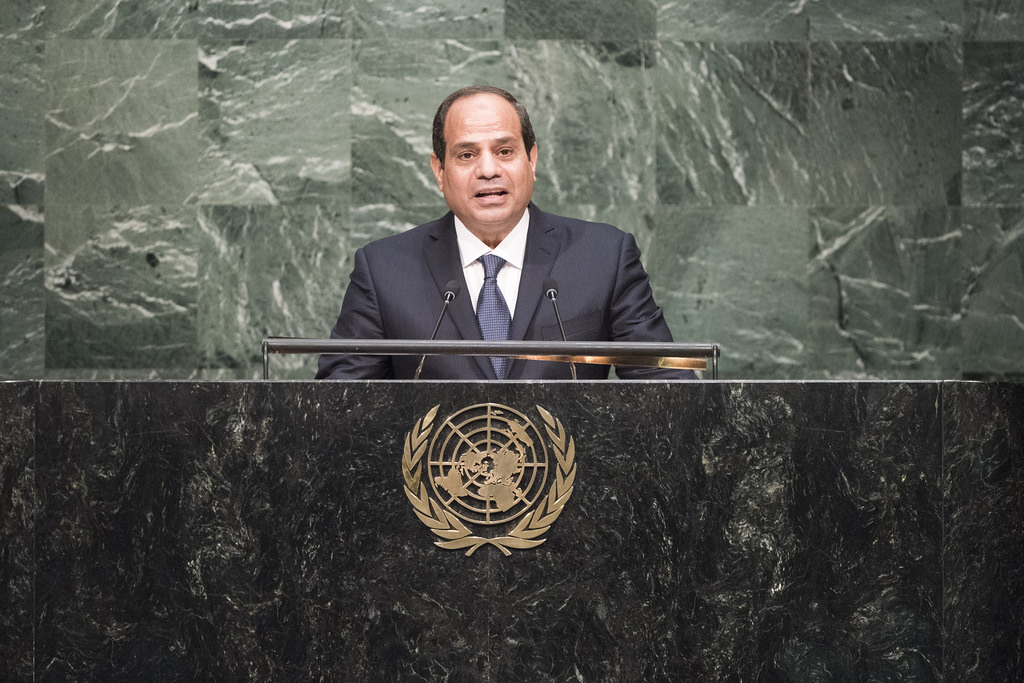 President Abdel Fattah Al-Sisi reviewed in his meeting with US high ranking officials recent updates of the two main topics that are currently highly discussed in Egypt that included Human Rights and economic conditions.

The meeting was held on the sidelines of the session of 72nd annual United Nation General Assembly (UNGA). Al-Sisi is expected to give a speech on the first day of the launching of general assembly, in which he will highlight Egypt’s challenges throughout 2017 on local and international levels.

Starting with human rights, Al-Sisi said that the concept of human rights should not be limited to political rights only, but should be dealt with a comprehensive perspective that includes economic educational and social rights as well.

He also questioned that human right are being judged in Egypt through western perspectives and asserting that the state is keen on respecting human rights standards, and affirmed that Egypt has a clear constitutional framework governing the relationship among state authorities and gives power to the elected House of Representatives to improve issues.

Throughout the past few weeks, there was controversy in Egypt regarding critics made by American founded non-governmental organization (NGO) Human Rights Watch (HRW), as it reported that “there is systemic torture in Egypt”. This report was followed by critics of High Commissioner for Human Rights for UN Zeid Ra’ad Al Hussein on 11 September regarding situations in different countries in the Middle East including Egypt in detailed statement published on the UN official website.

This statement referred to the situation of civil society in Egypt in the past years, and to recent measures imposed in the country such as declaration of state of emergency and blocking of websites, which was all decided on under the justification of fighting terrorism.

The meeting also included discussions the recently approved non-governmental organization (NGOs) law, in which Al-Sisi said that the government considered NGOs to be an important partner in the development process and works on supporting their role.

The Parliament adopted a law to regularize the NGOs situation in light of the great warnings generated by the society from the work of some of these associations over the past years. The law was ratified in accordance to the constitutional, Al-Sisi said.

On 23 August, American administration said that it will “deny Egypt $95.7million in aid and to delay a further $195 million because of its failure to make progress on respecting human rights and democratic norms,” referring the comments on NGOs law as an example.

In 2016, “NGOs’ foreign funding” case dates back to December 2011, were reopens again with a number of NGOs members, in which they are being investigated for allegedly receiving illegal foreign funding.

Regarding the economic conditions, the president reviewed recent economic measures taken to complete the economic reform programme, and reviewed what has been accomplished during the recent period to attract more investments, as well as development projects.

Al-Sisi has previously visited the US in April, in his first official visit after the inauguration of US president Donald Trump and met with the president of the World Bank, Jim Yong Kim, and executive directors of the General Electric (GE) conglomerate on the sidelines of the visit.